What are Utah Valley’s favorite pro franchises (excluding the Jazz)? 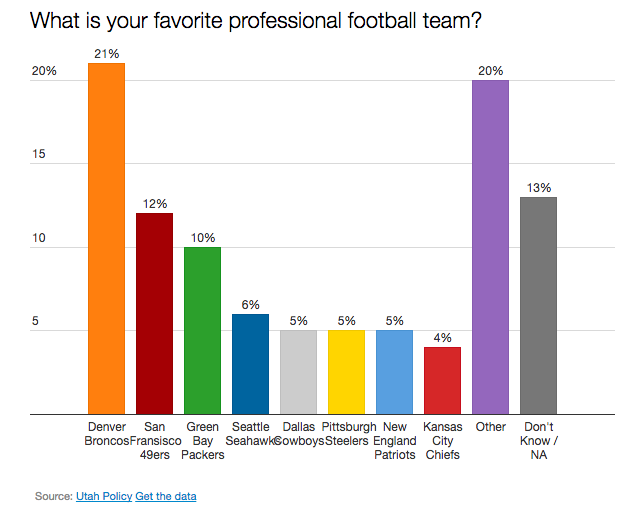 When the Detroit Lions hosted the Philadelphia Eagles at Ford Field on Oct. 9, dozens of fans in the stands wore Honolulu blue Lions jerseys with the name “Van Noy” emblazoned on the back.

“Are you from Utah, by chance?” a reporter from Utah asked one of the men in a Van Noy jersey that day.

Immediately, that man, and the others, could be identified as not just Van Noy fans, but BYU fans.

The day before, the Cougars knocked off Michigan State, 31–14, in East Lansing, Michigan. Some of the fans that traveled from Utah to attend that game decided to stick around an extra day to watch Van Noy and the Lions (another BYU product, Ziggy Ansah, did not play against the Eagles due to injury).

A couple of weeks later, Van Noy was traded from the Lions to the New England Patriots. I’m sure some BYU fans started looking for “Van Noy” Patriot jerseys (especially now that he is a Super Bowl LI champion).

Back in the 1990s, a lot of people in Utah County wore San Francisco 49er paraphernalia in honor of former Cougar quarterback Steve Young. There didn’t seem to be as many 49er fans in Utah County after Young retired and former Utah QB Alex Smith took snaps for San Francisco.

In the 1980s, a lot of baseball fans in Utah County loved cheering for former Cougars Wally Joyner of the California Angels and Dale Murphy of the Atlanta Braves. While Joyner actually played for BYU, Murphy didn’t, but he did attend BYU for a brief time.

Of course, the Utah Jazz will always be the fan favorite in Utah County among pro sports franchises. But there were some closet Boston Celtics fans back in the 80s when three former Cougars — Danny Ainge, Fred Roberts and Greg Kite — played for the Celtics.

What are the favorite pro sports franchises of BYU fans these days? In this age of fantasy sports, do you just follow the individuals, or have you formed allegiances with teams that have former Cougars?

In 2015, a poll conducted by Dan Jones and Associates revealed that the Denver Broncos are the most popular pro football team in the state of Utah, followed by the San Francisco 49ers, Green Bay Packers, Seattle Seahawks, Dallas Cowboys, Pittsburgh Steelers, New England Patriots and Kansas City Chiefs.

What about among Utah County residents? Would the Lions receive some votes? Or how about the Baltimore Ravens? The Ravens have four former Cougars — Dennis Pitta, Bronson Kaufusi, Robertson Daniel and De’Ondre Wesley.

If you live in Utah County, what is your favorite NFL, Major League Baseball and NBA teams and why?

Red Rocks: 7 heavenly reasons to head South for the Winter ... and beyond Previous post