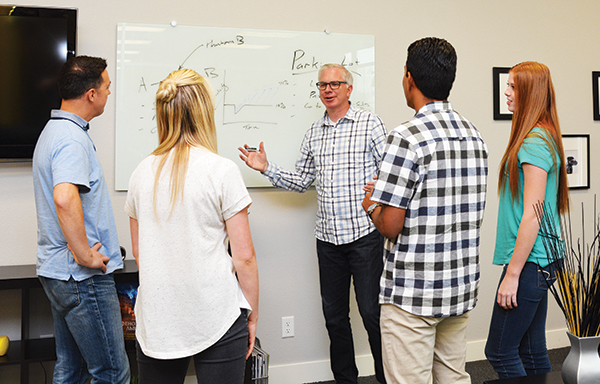 At company meetings, Brainstorm Inc. is a white board wizard. Every time the conversation goes off topic, they “park it” in the corner of the board to keep the agenda rolling. (Photo by Ansalee Morrison)

Off topic? Park it.

At American Fork-based Brainstorm Inc., they create a “parking lot” in the corner of the whiteboard during meetings. Whenever the conversation veers off topic, they park it on the board.

“Often those topics are very important, but immediate discussion of those will derail a meeting and not allow you to get to the important topics on the agenda,” says Eric Farr, co-founder of Brainstorm.

Parking tangent topics isn’t the only way to battle boring meetings. Here are five tips from Amber Hunter, director of employee performance at A Plus Benefits, on giving your meetings some productive magic.

1. Know your purpose and audience.

The success of a meeting is determined by whether it meets its objective. Know what the attendees need out of the meeting, then direct toward that. Everyone in attendance should understand what the purpose is. Is it to communicate your company’s vision? Is it to recognize employees? Why are the people sitting in front of you at the meeting? If the purpose has been met, you’ve got yourself a successful meeting.

The PowerPoint should “not be the main attraction of the meeting,” Hunter says. Follow two simple rules when it comes to PowerPoints. Rule one? Tell a story. Rule two? Less is more. The best way to engage a group is to relate a personal story. You tell the story, and then let the images or figures help them visualize it.

Looking for a healthy outlet? Invest in a complain stick. Let everyone involved have a turn holding the stick for 30 seconds. During his or her set time, the holder’s only job is to complain and voice concerns. Sometimes people just need an opportunity to vent, sometimes they need to joke, and sometimes they bring up valid points not previously considered.

Remember that urban legend that students can leave class if the teacher doesn’t show up after 15 minutes? The same rule applies to meetings. Be respectful of everyone’s schedule by starting and ending on time. Hunter even says that if you have the opportunity to end early, take it! Bonus points to the person who gives everyone 15 minutes back to their day. If you sincerely didn’t get through the meeting agenda in the allotted time, communicate with everyone in attendance to see if you should take a 15-minute break before reconvening or if you should reschedule.

Hunter suggests starting a tradition called, “Something Cool.” For each meeting, someone is assigned to bring or organize “something cool” to engage everyone during the first 15 minutes of the meeting. Popular choices are workout videos, art projects, watching a TED Talk, get-to-know-you-games, or even taking a walk. After doing something cool to break up the monotony of the day, everyone is refreshed and ready to tackle the meeting’s agenda.

Who will lead the meeting? Who will introduce the new project? Who will finalize the budget we discussed? (No Little-Red-Hen syndrome here: “Fine, I’ll do it myself!”) “Assign ownership to what you have discussed,” Hunter says. Make assignments and set deadlines for people to follow up. The effectiveness of the meeting should go beyond the allotted hour.