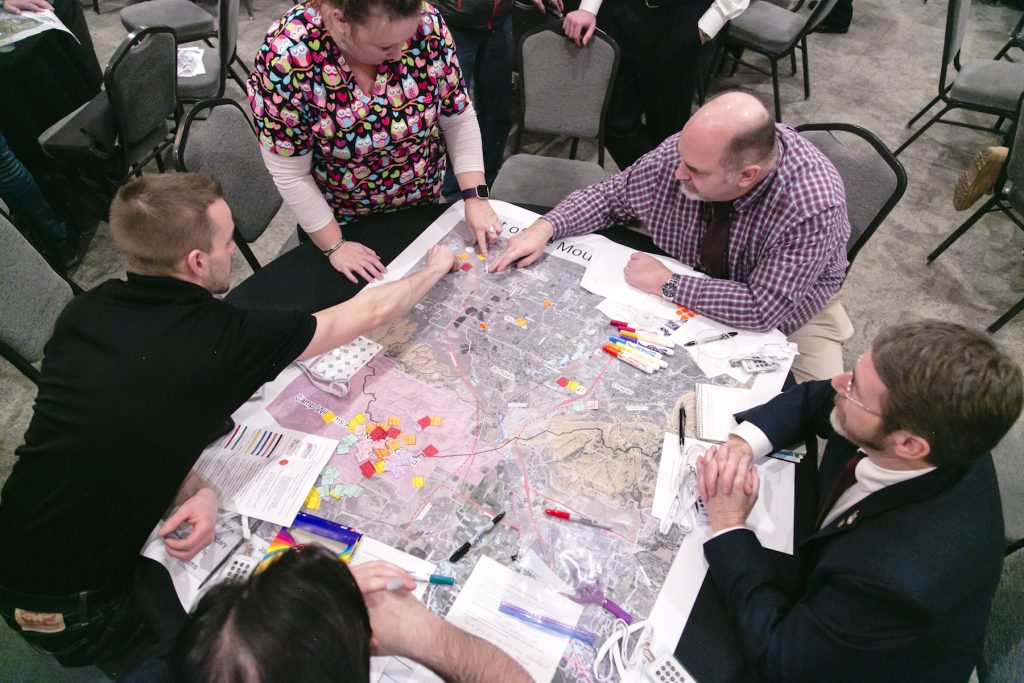 Attendees of Wednesday night’s public workshop mapped out the future they want for the Point of the Mountain region. Utah Valley residents will have the chance to chime in at Thursday night’s workshop at Thanksgiving Point. (Photo courtesy of Envision Utah)

If you could determine the future of the Point of the Mountain region, what would you choose?

That is the question before all citizens of Utah and Salt Lake counties at a public workshop on Thursday night at 6 p.m.

The workshop, held at Thanksgiving Point, aims to gather opinions from the public that will shape the use of not only approximately 600 acres from the Utah State Prison site — which will become available for development as the prison relocates within the next five years — but also approximately 22,000 acres held by public and private entities within the region stretching from Sandy and South Jordan to Saratoga Springs and American Fork.

By 2050, the populations of Salt Lake and Utah counties are projected to double — which makes coordinated planning for the future a must, said Christopher M. Conabee, co-chair of the Point of the Mountain Development Commission member of the Governor’s Office of Economic Development Board.

“There hasn’t been a decision made, and so the question becomes what’s the best thing to do?” Conabee said. “That can be done by planners with pens behind closed doors, but ultimately the citizenry and the elected officials of those individual areas need to give us guidance on what they want to see there so we can help them achieve it.”

The Point of the Mountain region is experiencing explosive growth that is unlikely to slow any time soon. From 2010 to 2015, one in six residential units in Utah was built in just three cities: Lehi, Herriman and South Jordan. In that same timeframe, Lehi and Draper were among the top five cities in the state with new office construction. 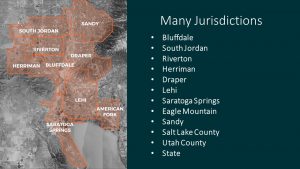 In response to the growing population and development opportunities ahead, the Utah State Legislature formed the Point of the Mountain Development Commission during its 2016 General Session. The Commission and consulting firm Envision Utah are working on a three-phase plan to establish a shared vision for the region’s future as well as strategies to make that vision a reality with help from both stakeholders and citizens.

At Thursday night’s workshop, members of the public can voice their opinions on the needs of the area — including a mapping exercise reminiscent of a real-life game of Sim City that gives participants a chance to map out what they want to see in the region with color-coded squares and stickers representing different types of housing, business, and recreational centers. The mapping also includes input on transportation, including where to place major roads, mass transit options and corridors for pedestrians and cyclists.

[pullquote]BY THE NUMBERS
26,000 Acres: The amount of land available for development in the Point of the Mountain area
1.3 Million: Utah County’s projected population by 2050
1.5 Million: Salt Lake County’s projected population by 2050
57,755: Number of net new jobs since 2010 in the region from Midvale to Pleasant Grove
No. 5: The Silicon Slopes area’s ranking as a top innovation hub in the United States[/pullquote]

Top suggestions from Wednesday night’s workshop in Draper included preserving the Point’s world-class paragliding, building a university or medical center in the region, and making the most of the Jordan River, from improved trails and kayaking access to riverfront development. Attendees also discussed extending TRAX to Utah County, creating pedestrian corridors that cross I-15, and widening roads through growing areas such as Saratoga Springs.

Following this week’s workshops, Envision Utah and the Commission will create a plan incorporating the gathered feedback and then repeat the cycle of meeting with stakeholders — including community leaders, transportation agencies, recreation and outdoor groups, business — and the public for additional input later this year.

A project of this scope requires public input and participation to become reality and stand the test of time beyond changes in leadership over the decades, Conabee said.

“To me, that’s the most honest part about the process — you have to have public engagement, you have to have the public involved, because it’s going to go for such a long period of time, they’re going to be the ones that are going to have to carry the torch and hold the accountability of performance to their elected leaders and their civic leaders,” he said.