Things to appreciate when attending sacrament meeting outside of Utah 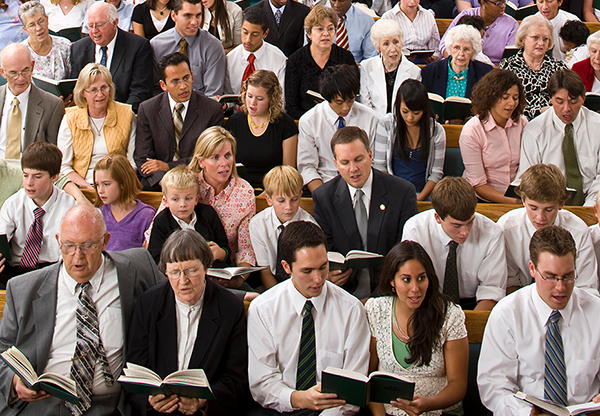 On a Sunday morning in early November, I was out of town on a business trip. I had an afternoon flight so I had some time on my hands.

I opened my laptop and searched LDS.org to find a meetinghouse near my hotel just outside of Cincinnati. To my surprise, there were several options of wards to attend. I settled on a sacrament meeting about 15 minutes away in Lakeside Park, Kentucky on 144 Buttermilk Pike.

I hadn’t planned very well so I didn’t pack my church clothes. So I showed up to sacrament meeting wearing the only clean clothes I had — jeans, a golf shirt and gym shoes. When I opened the chapel doors hoping to inconspicuously slip into a back-row seat, I found every seat filled. So I entered the front doors of the chapel and sheepishly walked in on the front row. While I felt self-conscious, nobody seemed to stare or made me feel uncomfortable.

Soon, I realized I was where I was supposed to be, even if I didn’t dress the part.

What I’ve learned over years is, attending church, no matter where, is the same everywhere you go throughout the world. The Spirit, the hymns, the scriptures are universal.

What I’ve learned over years is, attending church, no matter where, is the same everywhere you go throughout the world. The Spirit, the hymns, the scriptures are universal.

But attending church outside of Utah is different in some ways.

I wondered how I would look at, or think about, someone attended my ward on a Sunday if he were dressed how I was dressed that day.

I’ve attended sacrament meetings in numerous states and some foreign countries. Generally speaking, members seem to be less concerned about peripheral things, like clothing, that can interfere with meaningful worship. It reminded me that when I attend sacrament meeting at home, I need to do a better job of welcoming visitors.

Once while attending sacrament meeting in Indiana, my wife and I entered the chapel with our six boys wearing white shirts and ties. The bishop warmly welcomed us and said he was disappointed that we were just visiting. When he saw us arrive, he admitted he was hoping to double the size of his young men’s program.

In many places outside of Utah, people have to travel quite a distance to attend their meetings. So when the woman in that Kentucky ward who offered the opening prayer asked the Lord to bless them to make it home safely when the time came, she was sincere.

On that particular Sunday in Kentucky, it was fast and testimony meeting and there were many powerful testimonies from a diverse cross-section of people.

One of the most memorable testimonies was from a non-member who apparently is taking the discussions. I’d guess he was in his 30s and he said he’d been through a lot of trials, though he wasn’t too specific about them.

But his testimony was pretty deep. He said, and I’m paraphrasing a bit: “When storms come, it’s dark and cloudy. We can’t see the sun, though we know it’s there. Storms, which are a natural part of weather patterns, produce rain, which help things grow, just like the sun helps things grow. Trials are like storms in our lives that help us grow. The Son, as in the Son of God, is always there, even if we can’t see Him during our storms. But He’s there, behind the clouds. Our trials, and the Son of God, help us grow. The Lord’s light never stops shining, even when we can’t see it.”

That is a powerful analogy, and it made me reflect on my own faith in the Savior.

When the meeting ended, I left quickly because I had to check out of my hotel and, plus, I didn’t want a member of the bishopric introducing me to the missionaries and have them find out I was just some visitor from Utah.

Still, the Spirit I felt that day was the same that I feel at Church back home. I love the members of my ward, who teach me and strengthen me every week. The strangers I attended with in Kentucky taught me and strengthened me, too. Even if I was wearing jeans, a golf shirt and gym shoes. And that’s something to appreciate.