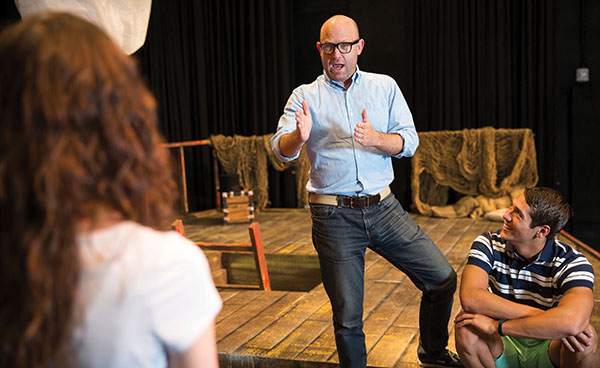 Christopher Clark continues to direct and teach theater at UVU, although he stepped down as department chair in December. Nearly one year after his ALS diagnosis, Chris now gets around in a motorized wheelchair. (Photo by August Miller, UVU Marketing)

When directing “Nosferatu” (based on a 1922 vampire movie), the play was also being shot on film as a live action, so the audience could watch on two levels — the actors on the stage as well as the screens showing the live filming.

In “She Stoops to Conquer,” Christopher had the actors play it straight but he added modern technology — the characters were having Facebook chats throughout the show.

In “39 Steps” at Hale Center Theater Orem, Christopher had four actors play all the roles.

Christopher rented a large warehouse in Salt Lake City to put on “Bride of Frankenstein,” and the entire show was lip-synced to the 1935 horror film.

“My actors learned when to breathe and how to match the cadence of the movie exactly,” Chris says. “It was one of the most difficult rehearsal processes I’ve ever been a part of.”

For another “Christopher Clark original,” he rewrote the story of Hans Christian Andersen’s tale of “The Little Mermaid” by using lines from all 37 of Shakespeare’s plays.

Christopher explained all of these theatrical choices plus more when he spoke last month at Creative Collaborative, a free community event at the Provo Rec Center. The PowerPoint presentation and his descriptions plus excitement prompted one audience member to stammer, “I hope this isn’t rude, but do you ever just do plays normal?”

Chris laughed and said, “There’s very little that is interesting to me about big budgets and being told yes all the time. When I’m forced to think outside the box, my best works shows up. Tight budgets make me think. They inspire me.”

Get the director’s cut on Christopher Clark’s battle with ALS here.

Behind the scenes: The Fab 40 photoshoot must go on Previous post