BYU basketball’s season of unfortunate events comes to a close

BYU freshman Colby Leifson shoots a 3-pointer during BYU’s 105-89 loss to UT Arlington in the NIT tournament. Leifson’s 10 points in the last three minutes of the game wasn’t enough to help the Cougars come back. (Photo by Rebecca Lane/UV360)

BYU basketball’s Wednesday night loss to UT Arlington was the perfect summary of the Cougars 2016-17 season: personnel problems, turnovers by the armful and the inability to defend the perimeter.

The Cougars never led in the 105-89 loss in the National Invitational Tournament.

Going into Wednesday night’s game, the No. 3-seeded Cougars lost another starting guard Elijah Bryant. He re-injured the knee he had a procedure on earlier this season.

With yet another untimely injury, Rose looked down his bench to redistribute playing time. That led to multiple lineups the Cougars hadn’t worked with during the season. BYU junior guard Davin Guinn filled in the remaining spot in the starting lineup, which was his first BYU career start. Then less-seasoned players BYU freshmen Steven Beo and Zach Frampton, picked up 23 and 17 minutes, respectively. Frampton had only played a total of 34 minutes throughout the season.

“Basically on just practice time and then things we thought we would need in this game,” Rose said on how he decided to redistribute minutes. “We really thought defensively we needed guys who would really play hard and (Guinn) and (Frampton) are those guys.” 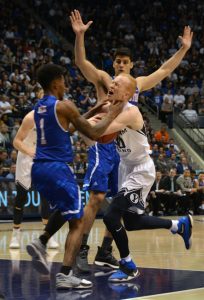 BYU freshman TJ Haws is fouled while driving to the basket during a game against UT Arlinton in the NIT tournament. Haws, who was sick, scored 11 points in the 105-89 loss to the Mavericks. (Photo by Rebecca Lane/UV360)

Beo, Frampton and Guinn contributed minimally to the offense with 4, 3 and 2 points, respectively.

Then there was another problem: another onslaught of sickness was passing though the team. BYU freshman TJ Haws caught the same bug Tuesday night that had kept BYU freshman Yoeli Childs out of practice the majority of last week.

“We actually suited up one of our walk-on guys because of our point guard issue,” Rose said. “I ended up playing Nick (Emery) at the point a lot tonight and that’s not been a position he’s played in a long time. I thought TJ (Haws) competed hard and tried hard, but you could tell he wasn’t himself tonight. That’s a lot of guys just to go down and we needed one of those guys to really step up and have a big night and lead out.”

Rose worked through every player on his shortened bench, but he couldn’t find anyone until at last he put in BYU freshman Colby Leifson — but by then it was too late.

“Hindsight is 20/20,” Rose said. “Colby (Leifson) looked like he was going to be the best. He played five minutes, scored 10 points. We really needed points, especially going down the stretch in the second half.”

But Rose wasn’t looking for excuses for the loss nor the season following the game Wednesday night.

Part of that work will involve finding a group that won’t turn over the ball so much. BYU turned over the ball 20 times in Wednesday night’s game, which the Mavericks converted into 32 points.

“It’s never easy closing a season,” Mika said. “It’s a weird feeling. You’re not used to it. You lose a game and think that sucks, but we’ll pick it up, we’ll figure it out, we’ll get better. We talked about just getting better. We’ve got to remember this.”

The Mavericks advance in the NIT tournament to host No. 7 seed Akron, which upset No. 2 seed Houston on Wednesday.