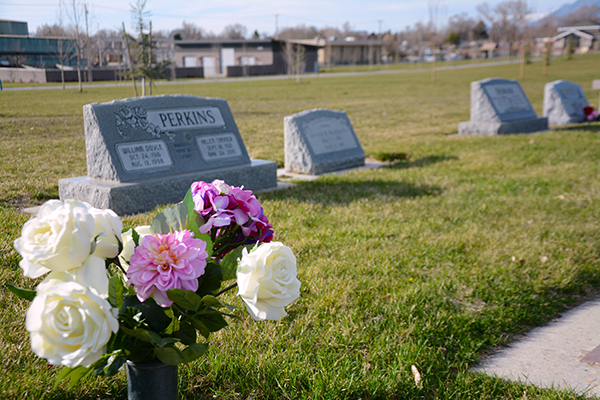 Beyond these graves on the west side of the Provo City Cemetery, are 474 unmarked graves of former mental hospital patients. The grassy field next to the cremation garden wasn’t marked because of beliefs of mental illness in the past, but now Utah State Hospital is raising money to mark those graves. (Photo by Rebecca Lane/UV360)

In 1931, doctors diagnosed 18-month-old Phyllis Joan with hydrocephalus. Because of her illness, her adopted parents didn’t want her anymore. So she ended up at the Utah State Hospital in Provo, where she would spend the last two months of her life. She died on July 27 that year, and hospital staff buried her in an unmarked grave on the west side of the Provo City Cemetery.

Along with Phyllis Joan, there are 473 other former mental hospital patients buried in unmarked graves at the Provo cemetery. The Utah Territorial Insane Asylum opened in July 1885, and the first patients died there in October 1886. The burials stopped in 1960, and the people who knew about them are gone.

“We really didn’t know they were there until a few years ago,” said hospital historian Janina Chilton.

Chilton said she was at a meeting and heard about problems in other states that had closed old mental hospitals. Those hospitals had cemeteries on their grounds, and when they closed the grave sites were abandoned or disturbed. She hadn’t ever seen a cemetery on the Utah State Hospital campus — “I’ve worked at the hospital forever.”

So she went to the city cemetery. It had records for all 474 burials, and exact burial locations. She and others have spent the last few years researching the patients, and comparing the hospital records with the cemetery, to make sure death dates and names are correct. They don’t have exact birth dates for very many.

Now that the research is done, the hospital is raising money to honor the hundreds of patients, some of who have been forgotten for more than 100 years. State Rep. Edward Redd, R- Logan, this year sponsored a resolution (it passed) to honor the forgotten patients and support efforts to build a monument to them, House Concurrent Resolution 3.

They’ve raised about $3,000 of $120,000 needed to build an obelisk monument dedicated to the patients. There also will be markers or tiles with patients names. They looked into putting markers on each grave site, but it would cost too much. Also, in one area the bodies are so close together that it would have formed a sea of concrete.

“We are really passionate about his project,” Chilton said. “We believe people lost in life shouldn’t be forgotten in death.”

They don’t have much information about the lives of the former patients. Each had a two-page commitment order, and in some cases that’s all the hospital knows about the person.

There was Julia, a housewife and mother of two, who was committed in 1885. She’d already spent two years at another asylum. She tried to escape twice, and she died at the hospital in 1903. The oldest person who died at the hospital was Martin, who was 90. Some of the patients had diagnoses of mental illness, some had developmental disorders, and others had epilepsy. Most patients spent their entire adult lives there — more than 100 of the people buried at the cemetery were at the hospital for 40 to 50 years, Chilton said.

The area where the patients are buried is on the west end of the property, and is now a nice spot near the new cremation garden. If you want to donate to the effort, go to the Utah NAMI website. For more information about the project, go to the Utah State Hospital website.