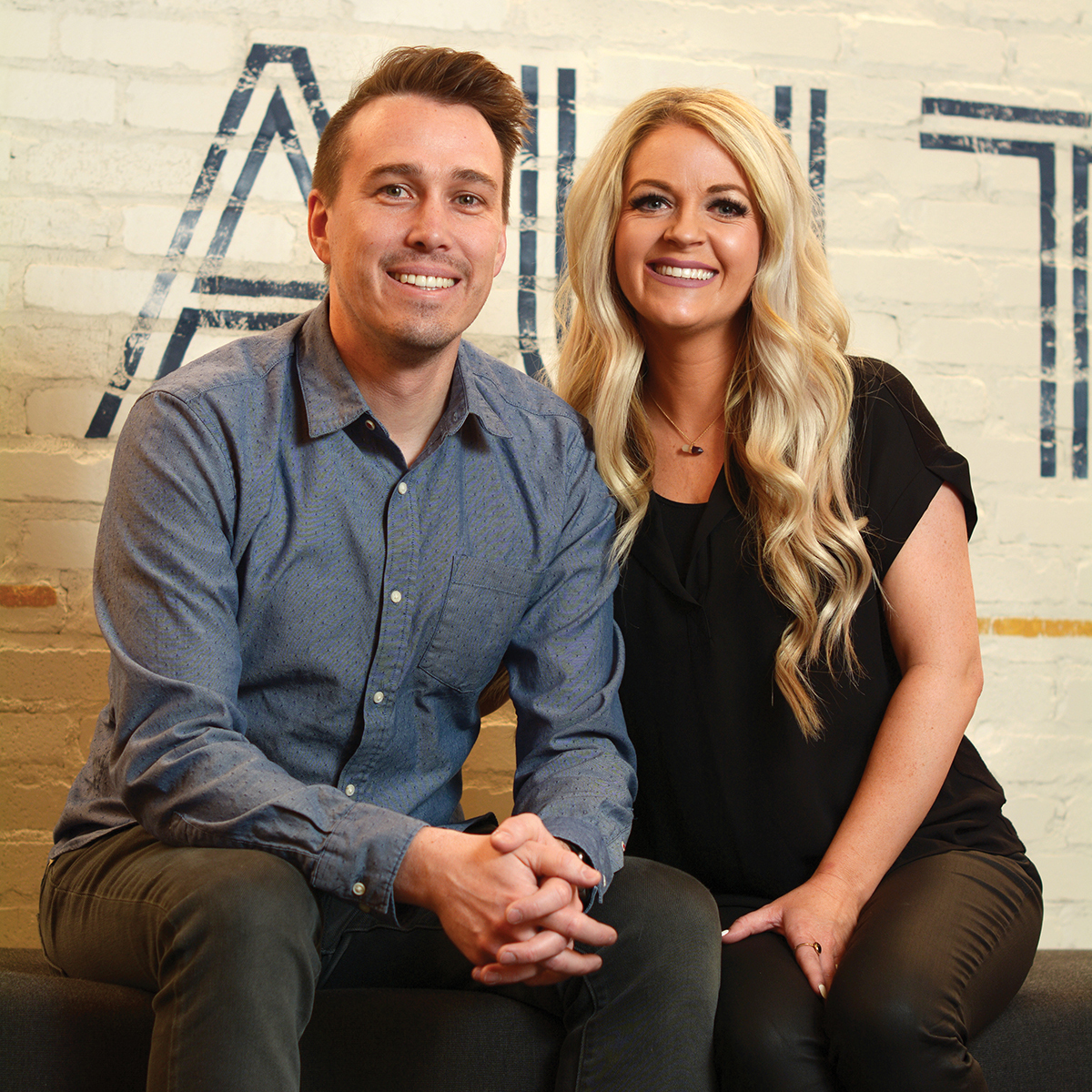 “People can read these kinds of articles and think we’ve got it all together — that we’re kicking butt and taking names. We’ve got tons of issues we’re constantly working through, and we’re always collecting feedback from our employees, sellers and customers to determine what we need to work on. The difference might be that we’re aware of them. And although it may be slowly, we’re working through them. It takes time, patience, and being OK with being a bit of a hot mess at times. We’re doing great things, but we’re a growing company with tons of hurdles. And once we clear those, there will be a multitude more to greet us.” (Photo by Dave Blackhurst/UVBizQ)

What started in 2011 as a home-based operation making button earrings has turned into a 100-employee, $110-million world-class online boutique.

Year in the life

This last year has been a whirlwind for Jane and its founders, Mike and Megan McEwan. They went from 56 to 100 employees, reached over $100 million in annual revenue, and had their first $1-million day on Black Friday (and proceeded to crush that record on Cyber Monday). Each of these milestones has been a blessing — and a challenge.

1. MUSANA. Jane works with Musana, which empowers women in uganda to break the cycle of poverty. “I went to Uganda with my daughter last year,” Mike says. “It was such an incredible, eye-opening experience to see these strong women forge through trials and hardships.”

2. Elizabeth Smart Foundation. Jane is now working on a relationship with the Elizabeth Smart Foundation to provide assistance to her center in Nepal. “This is the most excited I’ve ever been over Jane’s Philanthropy efforts,” Megan says. “It gives me goosebumps every time I think of it.” Adds Mike: “We’ve done some work with Operation Underground Railroad. We felt for these girls who’ve been dragged to hell and back. Elizabeth’s organization helps rehabilitate and educate these children so they can have a higher chance of success in society. We feel a duty to give back to our community and the world in a meaningful way. Philanthropy provides us, as naturally self-centered humans, with the opportunity to forget ourselves for a moment and realize how little we are. Perspective is restored. Egos shrink. We become a little softer. A little more accepting. More filled with love.”

“Managing 56 people is a whole lot different than managing 100,” says Mike, who is Jane’s CEO. “And I consistently find myself in new situations where I need to adapt and come up with new solutions. But we’ve made some incredible hires this year, and we’ve laid an incredible foundation for what’s to come. ”

“It’s so crazy,” Megan adds, “because every year I think there’s no way we can keep growing the way we have been, and every year surprises me. When we started Jane, I was just hoping for it to make us a steady, decent income. And it has done so much more than I could have dreamed.”

Another major moment of 2016? Mike winning Ernst and Young’s Entrepreneur of the Year.

“It was totally unexpected. What an honor,” Mike says. “My only regret is that Megan and I didn’t apply together as a couple. She’s as deserving of the award as I was. Jane wouldn’t exist without her hustling to find sellers, booking deals, sourcing product for backup deals, and raising our kids at the same time.”

Jane is focused on female empowerment in almost every facet of the company. More than half of its employees are women, the majority of its sellers are women, and it focuses its philanthropy efforts on women and girls. (See above sidebar for a closer look at two of Jane’s giving back missions.)

In particular, Mike and Megan have been surprised, stunned and seriously moved by giving sellers an opportunity to take charge of their incomes and lives.

“We had a seller who was literally living out of her car, homeless, and selling with Jane gave her the means to buy her own house and take care of her family,” Megan says. “Another seller was drowning in medical bills that she was finally able to pay off. Another was able to quit her full-time job and stay at home with her disabled son. We’ve heard so many beautiful success stories. It’s incredibly humbling.”

“Our culture is awesome … or at least I like to think so,” Mike laughs. “We have a lot of amenities and perks, but it truly comes down to our values. We’re working harder than ever to make our values known — authentic, simple, curious, initiative, impactful and resilient — and hiring people who exemplify them. Our Janesters are an ego-less people. They want to come up with and execute on the best ideas — no matter where they come from.” (Speaking of amenities, check out Jane’s incredible digs on page 50.)

The future is now

Where will Jane be in five years?

“Honestly, who knows! We could be in a smoldering pile of rubble and on an episode of VH1’s ‘Remember the 2010s,’” Mike laughs. “Obviously, that’s not what we want or what we think, but it’s hard to predict the future. We’ve bootstrapped Jane from day one. No doubt we’ve made mistakes, but it’s allowed us to learn and grow and make the decisions we want to make when we want to make them. The future is ours.”