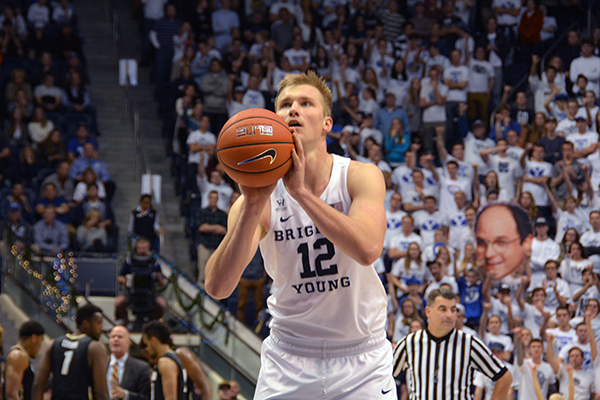 Eric Mika shoots a free throw during the game against Colorado University at the Marriott Center. During the 2016-17 season, Mika shot the second most free throws (295) and had the third most makes (225) in the NCAA. (Photo by Rebecca Lane/UV360)

BYU basketball sophomore Eric Mika announced Wednesday that he will enter his name in the 2017 NBA Draft. However, he will not hire an agent so he can maintain his college eligibility.

While Mika has chosen to forego having an agent, he wants people to know that this isn’t a drill. Instead, it is a carefully thought out plan he will intentionally execute over the next few months with assistance from his family and coaches.

“I expect to do well. I wouldn’t be entering my name, I wouldn’t be making a big deal out of it if I wasn’t expecting to do well and get drafted,” Mika said. “I have confidence in myself and my abilities and I’m hoping that I’ll get some attention from teams and do really well.” 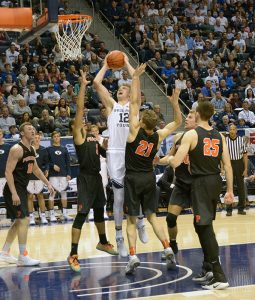 BYU sophomore Eric Mika pushes through the defense in the season-opener against the Princeton Tigers. Mika has decided to enter the 2017 NBA Draft. (Photo by Rebecca Lane)

Going into the season, Mika says he didn’t expect the level of success he experienced. He had no intention of entering the NBA Draft so early in his college career at the beginning of the season — but that progressively changed.

As Mika weighs his options for the upcoming year — entering the NBA, playing overseas or returning to BYU — he is grateful for the support of his coaches.

“It wasn’t easy going to them and telling them what my plan was, what my vision was, especially considering how much they have done for me, how much they do for me and the relationship we have and how much I love BYU,” Mika said. “It was a big relief hearing their support and having them put their arm around me and say, ‘We’re excited for you, this is what we wanted for you and we’ll be with you every step of the way.’”

Mika says the reactions were similar for teammates Nick Emery and TJ Haws, who make up the Lone Peak Three. The three played together in high school at Lone Peak High School in Highland, Utah where they earned the high school national championship in 2013.

“I expect to do well. I wouldn’t be entering my name, I wouldn’t be making a big deal out of it if I wasn’t expecting to do well and get drafted.” — Eric Mika, BYU sophomore

“[Their reaction] was positive, supportive, happy for me for sure. And I know that was 100 percent genuine,” Mika said. “It’s hard to think that what we thought of and what we had envisioned so long ago wasn’t going to be. I think it was tough for them, but those guys love me. I love them. We’re like brothers. They want what’s best for me and I told them I think this is what’s best for me, so they were 100 percent behind me.”

Becoming a professional athlete wasn’t always part of Mika’s plan, but when reporters started asking him about his NBA aspirations his senior year, he started considering the option. Then his high school coach Quincy Lewis, who now is an assistant coach at BYU, told him he could play the sport for a long time if he committed to it. That’s when the NBA seed was planted in Mika’s prospective future.

“I think it was toward the end of my senior year of high school that I said I really liked this and apparently people think I’m good at it, so I’d love to play and commit to it,” Mika said.

At this time, Mika says there are a lot of different aspects to his ultimate decision that he has to evaluate, but one consideration was his age. At 22, Mika considered himself just as ready as other prospects.

“I don’t think anyone is really NBA ready,” Mika said. “You look at the draft picks for how many years now and a lot of them are 18-year-old and 19-year-old kids that aren’t ‘NBA ready.’ But a lot of it is potential, a lot of it is what can you do for us in a couple years or in a year with the right development.” 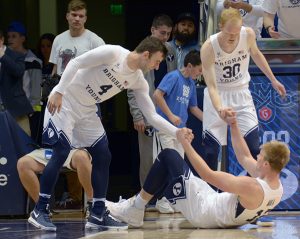 BYU sophomore Nick Emery (4) and BYU freshman TJ Haws (30) help up teammate Eric Mika during a game at the Marriott Center. Mika has decided to enter the 2017 NBA Draft, which means these three known as the Lone Peak Three could have officially seen their last days on the court together. (Photo by Rebecca Lane/UV360)

Ready or not, Mika says he intends to make every necessary preparation to see his NBA goal come to fruition. He’s planning on reaching out to former BYU point guard Kyle Collinsworth, who currently plays for the Texas Legends in the NBA D-League, for advice. He’s already received a piece of advice that is shaping his schedule for the next month in preparation for the competition: workouts are 60 percent conditioning, 30 percent is mental state and 10 percent is ability.

“Obviously those numbers can be exaggerated or shifted a little bit, but hearing 60 percent is conditioning helps me know what I need to do in the next month,” Mika said. “Obviously, I have things to work on. A lot of guys doing this have things to work on, but I’ve got to stay in shape is one of the biggest things.”

Mika says he hopes to demonstrate his ability to stretch the floor as a four with more mid-range shooting, which fans saw more of during his sophomore season.

“I think with this year I was blessed to have been here and have the season that I had, which once again, looking back I wonder how I did it because I didn’t have these kind of expectations for myself,” Mika said. “I know that NBA teams are watching. I know that scouts are watching and I definitely turned heads this year. That’s a good base to build on.”

And while he fully “intends to be drafted by a team,” Mika said he would be happy to return to BYU if things don’t pan out during the 2017 draft to play for another season.

“Life’s all about those options,” Mika said. “That would definitely be something high on my option list. In case something happened and I did come back, obviously I would love to be here and just improve and get ready for the next year.”

I tried it: Writer Kjersten Johnson goes under with Dive Utah’s scuba class Next post