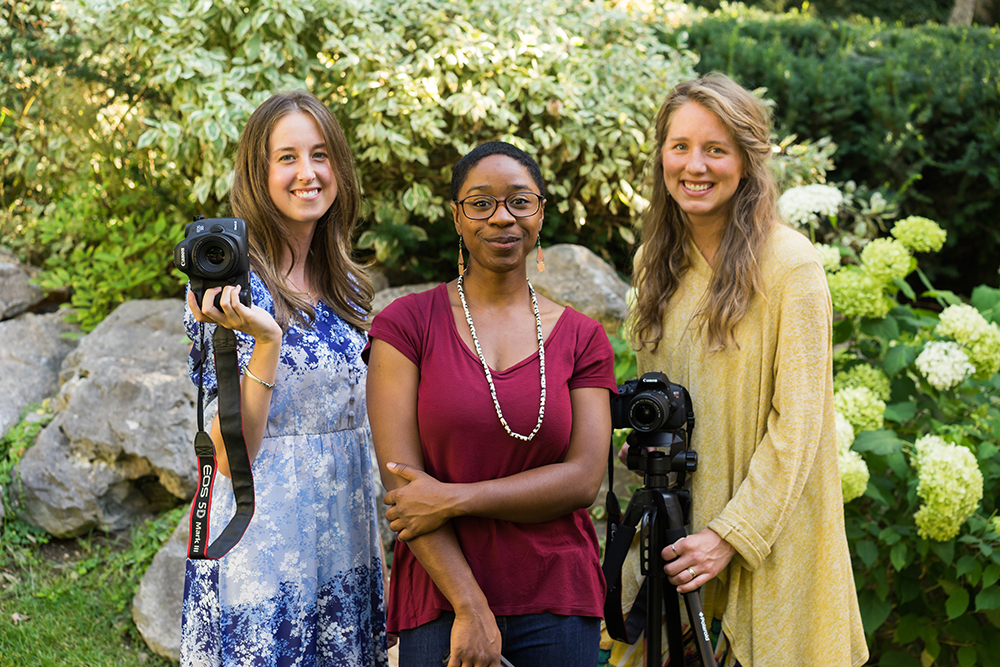 Amber Richardson, Camlyn Giddins and Anna Hargadon Peterson are the co-creators — or as they call themselves “story gatherers” — for Splitting the Sky, a new video series interviewing women about their relationship with God. (Photo courtesy Splitting the Sky)

Although the Relief Society is one of the largest women’s organizations in the world, three LDS women noticed a lack of Mormon women represented in church history stories.

So they decided to fill that void with a video series — Splitting the Sky. The videos explore individual women discovering who they are, developing their relationship with God and coming to terms with their unanswered questions.

Over the next six months, Splitting the Sky will release a new video from its series every Wednesday on YouTube. The ultimate goal is to lessen the ambiguity and philosophical division amongst women in The Church of Jesus Christ of Latter-day Saints.

“That was part of the motivation and objective — to create and model how we can connect with each other and unify instead of being divided,” said Anna Hargadon Peterson, co-founder of Splitting the Sky.

Alongside Peterson, Amber Richardson and Camlyn Giddins ventured on a personal journey of reflection and answer-seeking while exploring the lives of other Mormon women.

Why Splitting the Sky?

The video series name, Splitting the Sky, was inspired by a poem by Edna St. Vincent Millay, “Renascence.” The final stanza in the poem reads:

“The soul can split the sky in two,
And let the face of God shine through.”
Peterson says when she found the poem, it beautifully illustrated the process of revelation that they were seeking in this project.

“It’s powerful the image and putting yourself in a position of splitting the sky — that’s a position of power,” Richardson said. “A lot of people associate deity with the sky.”

The three “story gatherers,” as they refer to themselves, found their niche in projects focused on Mormon women in 2013. Together they worked on their first project, “Women of Faith,” a short film sharing stories about women in church history. But the trio split when Giddins left on her LDS mission.

While Giddins was serving, Splitting the Sky conceptualized.

During a fireside for “Women of Faith,” people expressed their desire to hear more stories of modern-day women and the struggles they face in daily life. Contemplating this feedback, Peterson went to the temple where she first felt inspired to interview women about their relationship with God.

When Peterson approached Richardson with the idea, Richardson sensed the project’s potential.

“We’ve never really told the stories of women through video and when we do, we do it in really limiting ways,” Richardson said. “I don’t feel like the church or any other body has captured the diversity that is implicate within the members of the Mormon church. I … started realizing that actually this is a field and nobody is working in it and it is really, really important.”

The last instrument the two needed for Splitting the Sky was their partner from the “Women of Faith” project.

It didn’t take long for Richardson and Peterson to approach Giddins when she returned home from her mission in February 2015. In fact, they approached Giddins at her homecoming. But Giddins wasn’t sure if she wanted to join because she knew the extensive hours it would take to create the elaborate project — but she came around to the idea.

“When I went over and we talked about it, they were using certain vocabulary words that were trigger words for me as far as what path I wanted to take — words like journey, identity, revelation, questions,” Giddins said. “They were using all the words that were things that I was in the middle of and seeking.”

With Giddins in, the team was formed once again and the project began.

The initial idea of the whirlwind project morphed over time as the women realized these discussions and their own journeys sat more in gray than in black and white.

“Women are complicated and spirituality is complicated,” Peterson said.

The general idea to interview women about their relationship with deity stuck while the project developed.

“The goal is to capture that woman for who she is, not for who she appears to be,” Richardson said.

The project dove deeper with the decision to document the development of their own stories along the way, inputting their revelations and lessons learned from hearing about other women’s lives.

“We start sharing, but what is unique is we keep coming back to our stories and our experiences with each woman’s story, so we keep coming up and how we are evolving with them,” Giddins said. “Then we are hoping at the end we’ll share where we’re at right now all together.”

Executing the project: The women

Finding women to interview was a surprising challenge for the group. Their goal was to find women from all different ethnicities, political standings and backgrounds, but sometimes when they found a woman with a diversified story, the woman wouldn’t feel like her story was special enough for the project.

“We’re hoping this project will help those women who were not previously self-reflective or self-aware or willing to go there,” Giddins said. “Now, hopefully, they’ll have courage to tell those stories because these women have.”

They asked the participants — which includes some international women, a cancer patient and even a former stripper — soul-searching questions about what motivates them to be who they are today.

Splitting the Sky found a total of 30 women to interview. All of the women featured in the series are LDS women except one — Giddins’ grandmother, a minister for a nondenominational Christian congregation.

While the group hasn’t found answers to all the questions they had about womanhood in the beginning, they feel fortified in their faith.

“I would say it’s deepened my understanding of womanhood, godhood and sisterhood,” Peterson said.

Beyond gaining an appreciation for her fellow sisters in Relief Society, Giddins found herself.

“At the beginning of this journey I was seeking so hard to know who I was,” Giddins said. “I spent so much time zeroing in and focusing on this small little thing, but this has opened me up to be comfortable with where I am now instead of continuing to seek for something that’s out there.”

They have also developed an ability to express their thoughts, doubts, questions without fear that it takes away from their individual testimonies.

“I think we’ve talked about how we’ve felt our questions deepen, but simultaneously I feel a greater confidence that there are answers and we can get to them,” Richardson said. “That’s an interesting juxtaposition, but for me it looks like I can sit in the same room with my questions and they’re like an old friend. I’m not afraid of them and I’m not trying to get them into a choke hold.”

Follow the Splitting the Sky series on YouTube, where the group will release a new video every Wednesday.