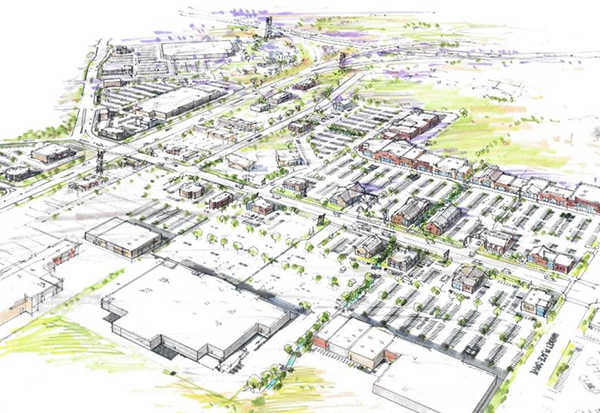 In 2007, Target and Home Depot were slated to build in Spanish Fork, just off I-15 along Highway 6. Then the economy fell apart, target pulled out and Home Depot sold its property back to the developer. The land remained empty for a while, then things started to happen again.

First Costco came along and opened in 2011, said Dave Anderson, Spanish Fork’s community and economic development director. Then Wal-Mart. And the stores and restaurants keep coming in the Canyon Creek Commercial Center.

“I think everybody’s patience paid off,” he said.

“It’s taken a really long time to get here so we’re just really excited to see now this next phase really coming online.”

Woodbury Corporation, which also owns University Place in Orem, announced this month that it’s adding 245,000 square feet of retail and restaurant space to the shopping area. That will mean up to 45 new stores and restaurants. It already has Costco, Wal-Mart, Good Earth, Ace, restaurants and more. When its built out, the shopping area will have more than one million square feet of retail and commercial space.

As part of the new area, a Petco and Ross are being built where the Water Gardens movie theater and Food4Less were. The Food4Less building was empty for 12 years, Anderson said. Construction is underway.

“They’re really pushing to be open for Black Friday,” he said.

Besides Ross and Petco, the new area will have a Cinemark, DownEast Home, Ulta Beauty and Famous Footwear, according to a Woodbury press release.

The development has stores that used to only be in the Provo-Orem area in Utah County.

“We envision Canyon Creek Commercial Center as a central hub for economic activity in south and central Utah County,” Jeff Woodbury, senior vice president of development and acquisitions for Woodbury Corporation, said in a press release.

Anderson said city officials hear from people who live in Juab, Carbon and even Emory counties who used to drive to Orem or Provo regularly to shop, who don’t need to anymore. “They’re saying increasingly that they don’t need to go any farther north than Spanish Fork. … We speak to different retailers who recognize the trade area we serve in Spanish Fork with I-15 and US 6 is extremely large. They anticipate drawing customers from hundreds of miles away.”

IHC also plans to build a hospital north of the commercial space. Anderson said construction could begin in 2018, with an opening in 2020.

He said he’s most excited about the new movie theater, but not because of his love of movies. For years residents have been asking for more sit-down restaurants. Having the new theater is the best chance to get interest from restaurants like Olive Garden, Chili’s and Applebee’s.

The development also has increased interest in other parts of the city. “Our biggest challenge is finding a place for other restaurants and retail that want to be in Spanish Fork.”

Wal-Mart is building a neighborhood market near the mouth of Spanish Fork Canyon, and there is other commercial development in that area. Eventually, the area around the Salem/Benjamin I-15 interchange likely will develop into retail, he said.