Gonzaga credits loss to BYU for success in NCAA tournament 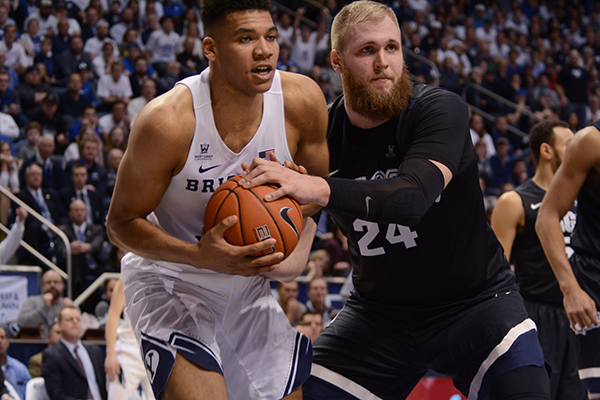 BYU freshman Yoeli Childs and Gonzaga senior Przemek Karnowski battled for possession during a game in the Marriott Center. (Photo by Rebecca Lane/UV360)

As Gonzaga’s basketball team prepares for the NCAA championship game Monday night, they are grateful they aren’t going into the game undefeated, according to Yahoo! Sports.

In February, the Cougars dished the then-undefeated Bulldogs its first and only loss. The 79–71 victory for the Cougars was the third year in a row the Cougars had defeated the Bulldogs in The Kennel — but it was an even bigger deal than previous years. Gonzaga was ranked No. 1 in the AP poll and the ESPN broadcaster perfectly explained the scenario when he proclaimed, “Goliath goes down,” at the end of the game.

“It definitely helped us,” Gonzaga guard Jordan Mathews said in a Final Four post-game press conference. “There’s a process we have to winning, and we kind of deviated from it in that game. We’d been so used to crushing teams. In that game, we were up 18-2 early and we got away from what we did to get that lead. That made us realize if we don’t stick with the process, we’ll be in trouble.”

The Bulldogs were devastated, but the loss that brought their record to 29-1 at the conclusion of West Coast Conference play was also a helpful awakening for the team.