2017 Marketer of the Year: Harmon Brothers 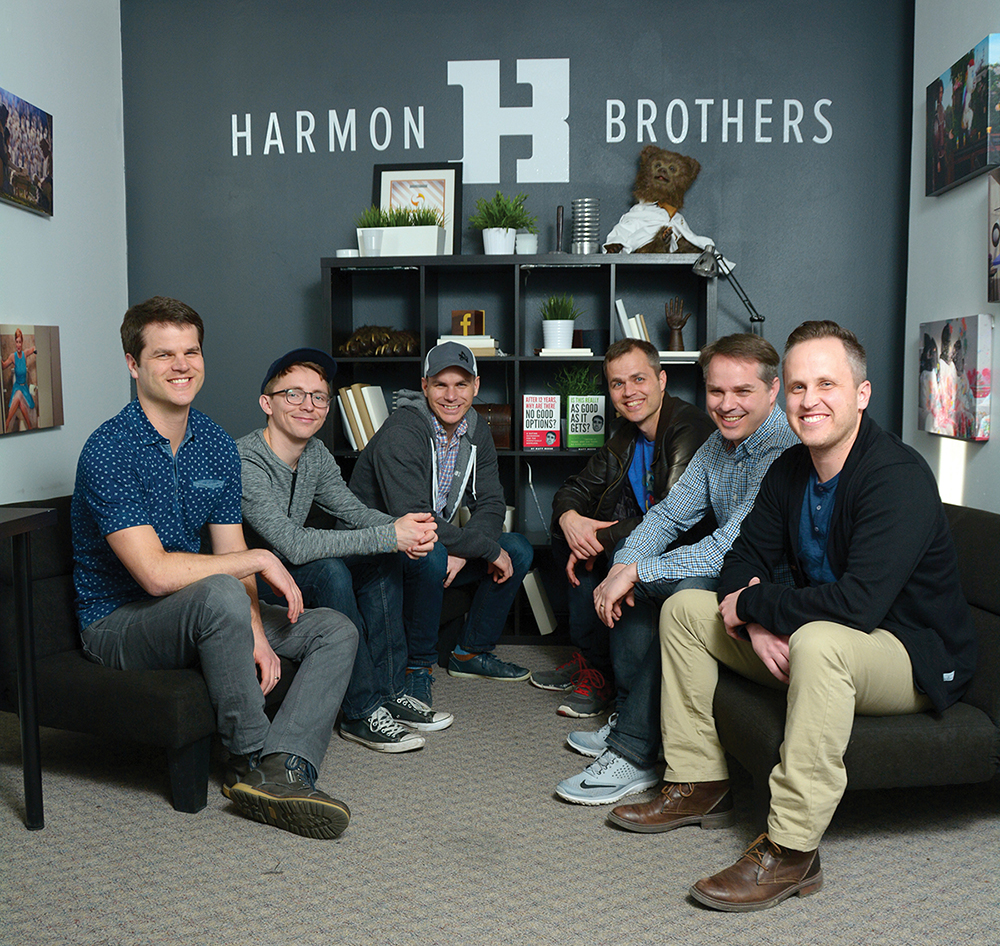 “Working with family is great. We understand each other quickly. We coordinate things well. And whenever a heated blow-up comes along, it’s over in an hour and then we can get lunch like nothing happened. Because we’re family, there’s a safety there where work disagreements aren’t personal. We can be passionate without the threat of ruining relationships. And without question, there are more pros than cons.”

There’s no skipping these ads.

The Harmon Brothers are all work and all play. The Provo-based marketing agency is a viral video king, with its ads being viewed more than 450 million times and driving more than $100 million of revenue in 2016.

So what’s on their playlist?

They made Chatbooks all the chatter of social media with their “real mom” commercial that so doesn’t suck (don’t say suck). They drove a car off a cliff — and crashed view counts —with their FiberFix ad. They gave Purple mattresses a dream pitch with Goldilocks and the four raw eggs. They created a political ad for Gary Johnson that outperformed any campaign ad from Trump, Clinton, Sanders or Obama. And heck. They even turned crap into marketing gold for both Poo Pourri and Squatty Potty (the latter starring a rainbow ice cream pooping unicorn, of course).

1. Star players. There are four Harmon Brothers working the business: Jeffrey, Neal, Daniel and Theron. Their cousin, Benton Crane, is also on the roster. And the total all-star employee team numbers nine (plus an additional 11 contractors).

2. First brush with success. Before they were officially The Harmon Brothers, the bros created the marketing campaign for Orabrush. Remember the Bad Breath Test? That came from the minds of Neal and Jeffrey Harmon. For the record: Google used the campaign as a poster child for YouTube advertising, it was taught as a case study in business schools, and it launched Orabrush into major retailers.

3. Angelic entrepreneurship. The Harmons also founded VidAngel, which helps people watch movies “however the bleep they want.” The company is in a tough legal battle with four major Hollywood studios, but community support is heavenly. They raised $10.1 million to help with legal fees (nearly 40,000 customers donated) and 8,000 people wrote letters to the federal district court detailing why movie filtering matters to them.

This isn’t your grandma’s marketing, folks.

So what’s the key to their viral prowess?

“We really are the best of both worlds,” says Daniel Harmon, creative director and one of the brothers. “We can give companies both the prestige of traditional branding and the call-to-action of an infomercial — without all the negative cheesy baggage. We can build a compelling, emotional brand and get a return on investment. We’re actually rather remarkable.” (laughs)

“We don’t go into any ad with a specific timeframe,” says Theron Harmon, a producer, client liaison and one of the brothers. “We know what we want the sale to be and we know how much we want people to be laughing. Our videos are typically anywhere from two to four minutes, but we’ve done some as long as seven minutes. We make it as long as the product demands.”

But what happens if they don’t believe in the product?

That’s easy. They don’t sell it.

“We have to be passionate about what we’re selling,” says Dave Vance, one of the company’s lead writers. “So once we decide to take on a client, we immerse ourselves in the product. We use it. We live it.”

That immersion includes fun and boisterous pitch sessions. And let’s be clear — there are no crazy ideas in brainstorming.

In everything the Harmon Brothers do, humor is the common component.

“Comedy makes boring things interesting and controversial topics safe,” Vance says. “People want to laugh together. If something is hilarious, it will get shared.”

But word to the wise-guys: the laughs need purpose.

“If the hilarity has no connection to the product, people will walk away from the commercial remembering the joke but not what they’re supposed to buy,” Vance says.

“Companies with a sub-par product think a great campaign is the silver bullet,” Crane adds. “But to have truly profound success, you need both a great product and a great campaign. Good luck faking it.”

The future of the Harmon Brothers is on loop — with a few new plays in the plan.

“And of course big oil,” Vance quickly adds. “Big tobacco, big pharma — anyone who needs a spin. That’ll be phase three in our quest for world domination.”