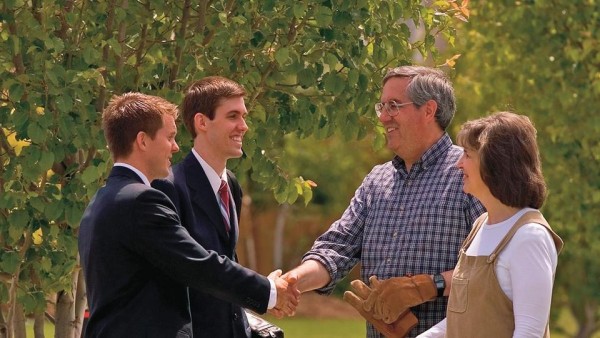 The idea is simple: On P-days, a missionary calls a toll-free number, talks to a machine for five minutes, then hangs up. A link to the recording is then emailed to the missionary’s friends and family.

The implications are exciting: Families can hear their missionary’s voice, the missionary doesn’t have to spend as much time on email, and the process is well within LDS mission rules (the missionary never speaks to a live person, and calls are toll-free). The family can download the messages as a missionary voice journal or order a CD from the company at the conclusion of the mission. The service is called Listen to the Mission, and it’s up and running now.

“As we’ve talked to mission presidents, they’ve told us, ‘We hear so often from parents that they’re not hearing enough from their missionaries,'” says Kim Scoville, who came up with the idea for Listen to the Mission. “This helps solve that problem. And one of the common conflicts between companionships is how to spend P-Day time — to not have to spend the time to take a trip to the library and email home but to be able to just use the mission phone to record an update on your way to the zone or district activity makes it easier for them as well. We’re really excited about it. It solves some problems for mission presidents and for missionaries, and missionary moms love it.”

Listen to the Mission is a voice recording service for full-time missionaries. It’s an idea Kim had for years, but one she didn’t act on until she had a missionary of her own.

“As we’ve talked to mission presidents, they’ve told us, ‘We hear so often from parents that they’re not hearing enough from their missionaries.’ This helps solve that problem.” — Kim Scoville, Listen to the Mission creator

Kim teaches entrepreneurship at BYU. After seeing some interesting new applications for voice recording tools, it occurred to her that the lost practice of missionaries creating voice recordings on tape recorders could be easily revived with modern technology — as long as appropriate limits were built in to comply with mission rules.

Those limits are built in to the program with Listen to the Mission: missionaries can only record messages on P-days, they can only record for up to five minutes, and the system is built in a way that missionaries never speak to a live person — their message is simply recorded and emailed home. All mission presidents in the U.S. and Canada were sent a letter explaining the service, and the response was largely positive.

The advantages of using voice recordings to report home are obvious. Parents of missionaries who have used the service say that hearing their child’s voice — including voice inflection and mood — often tells them more than words in an email can.

“There’s nothing more comforting than being able to hear your missionary’s voice,” says Barry Robinson, whose son used the service for the last few weeks of his mission. “It gives you comfort, knowing they’re enjoying themselves and that their emotions are not being covered up in the words of a letter. We could hear his companion in the background; it was neat.”

Kim uses the service with her son, who is currently serving in Indiana.

“I remember one voice recording, it was just after a transfer and he was expecting to be transferred but he wasn’t. He said, ‘It was great; we had a great week, my companion is great’ — he said ‘great’ like 97 times,” she says. “I could tell he was trying to stay positive. I thought, ‘It’s time to put a package together. He could use a little pick-me-up this week.’ That’s a benefit of it. Moms know their kids and they can tell how they’re doing. I’m more connected to him emotionally, and that makes me feel like my prayers for him are more on target. I can respond with what he needs — a package, or a prayer, or whatever it is. It’s a deeper connection for the family to feel like they’re having that experience with him.”

“The opportunity to listen to yourself in the future, or to have your posterity listen to you when you were on your mission, that’s quite valuable as well.” — Barry Robinson, Listen to the Mission client

Another limitation of the voice recording program is that missionaries may not include as much detail in a stream-of-conscious voice recording. But using the voice service doesn’t mean a missionary can’t email as well.

“I think the two work really well together,” Robinson says. “It’s a lot easier to go read a journal than it is to sit down and listen to a journal, but at the same time, the opportunity to listen to yourself in the future, or to have your posterity listen to you when you were on your mission, that’s quite valuable as well. I’d say it’s important to do both.”

The Listen to the Mission service is available on a subscription basis for $9.95/month (for most missions). The subscription gives the missionary 20 minutes of recording time per month and allows family members to send the incoming messages to friends and family members. Visit the company’s website for more information.