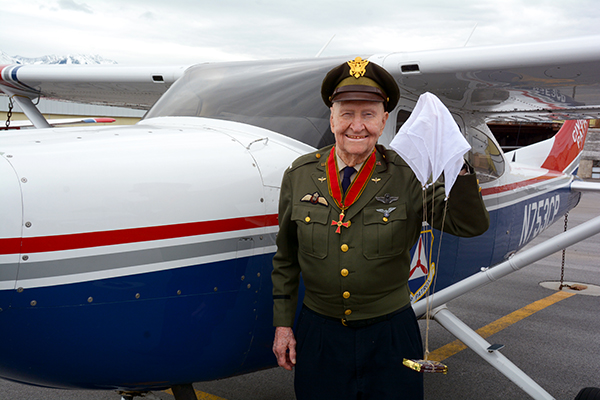 Gail S. Halvorsen — famous as the Candy Bomber from the Berlin Airlift — lives in Spanish Fork and carries on his legacy of service through The Gail S. Halvorsen Aviation Education Foundation. (Photo by Greg Bennett/UV360)

Gail S. Halvorsen, known internationally as the “Candy Bomber,” has dedicated his life to aviation education, to mentoring youth and responding to the emergency needs of those around him. Now, the foundation dedicated to his legacy — The Gail S. Halvorsen Aviation Education Foundation — continues his work.

The retired colonel lends his name and support to the Foundation, which is dedicated to advancing aviation education, promoting youth leadership development, enhancing community capacity for emergency response and encouraging humanitarian service on macro- and micro-levels.

As its initial project, the Foundation is raising money to construct an 8,000-square-foot multi-use facility at the Spanish Fork-Springville Airport. The facility will provide space to house STEM educational enrichment events for local schools and private youth groups, display memorabilia and artifacts that visually depict the Candy Bomber story, and provide meeting space for other like-minded organizations that support the Foundation’s education and humanitarian service missions.

The Candy Bomber story starts with Halvorsen’s initial idea to drop small gifts out of an airplane using small handkerchief parachutes long before the Berlin Airlift that would bring him international fame as the “Candy Bomber.”

“I was impressed with those children. Not one of them asked for chocolate when they saw us. They just didn’t want us to give up on them. They knew that someday they would have enough to eat. One of them said, ‘If we lose our freedom, we know we’ll never get it back.’ It had an affect on me. These children, who had lived through Hitler, taught me a lot about appreciating freedom.” — Gail Halvorsen

Shortly after graduating from Bear River High School and earning his pilot’s license, Halvorsen would fly north from Brigham City to Rigby, Idaho, where the pilot spent his early years.

“I flew over the home of my friend, Harold Dowdle, and wiggled my wings as I circled,” Halvorsen said. “Then I dropped a parachute to him. That was the first time I had the idea.”

Seven years later, in 1948, Halvorsen was assigned by the Army Air Corps to Germany to be a pilot for the Berlin Airlift, which delivered much-needed supplies and food from West Germany into West Berlin. It was during this assignment that Gail would wiggle the wings of his plane and then drop candy from parachutes to the children of Berlin. His actions would earn numerous nicknames, including the Candy Bomber.

“I was impressed with those children,” Halvorsen says. “Not one of them asked for chocolate when they saw us. They just didn’t want us to give up on them. They knew that someday they would have enough to eat. One of them said, ‘If we lose our freedom, we know we’ll never get it back.’ It had an affect on me. These children, who had lived through Hitler, taught me a lot about appreciating freedom.”

With his desire to assist others and give them hope, Halvorsen’s legacy continues through the The Gail S. Halvorsen Aviation Education Foundation. The Foundation advances aviation education, promotes youth leadership development, enhances community capacity for emergency response and encourages humanitarian service on macro- and micro-levels. 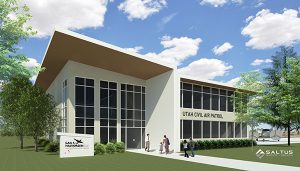 The Foundation’s new 8,000-square-foot facility will be located at the Spanish Fork-Springville Airport. It will include meeting space for the Foundation, memorabilia from Gail’s life and will serve as a local operating location for the Civil Air Patrol. (Image courtesy Gail S. Halvorsen Aviation Education Foundation)

“Another thing that stood out to me from talking with those kids in Berlin is that they said they can live with thin rations, but not without hope,” Halvorsen says. “Without hope, the soul dies. It applied to the children in Berlin and it applies to our neighbors today.”

The Foundation is dedicated to serving others and carrying on Halvorsen’s legacy.

“At another point in my life, I asked a group of people, ‘Why is the Dead Sea dead?’ The reason it’s dead is because it wraps its arms around the fresh water from the Sea of Galilee and takes the life out of it. There are people in our neighborhoods that are Dead Seas — they look for themselves first. We need to reach out to improve our lives and the lives of those around us.”

The building will also become the operating location for the Civil Air Patrol’s central region of Utah. The Civil Air Patrol is the civilian auxiliary of the U.S. Air Force and is made up of volunteers that work toward three main purposes: aerospace education, youth cadet programs and emergency services, including search and rescue and disaster relief.

Weekend best bets: 5 Utah Valley events to get you outside Next post