Home Life Home and Garden I tried it: Writer Kjersten Johnson moves into a local tiny home for a big night

I tried it: Writer Kjersten Johnson moves into a local tiny home for a big night 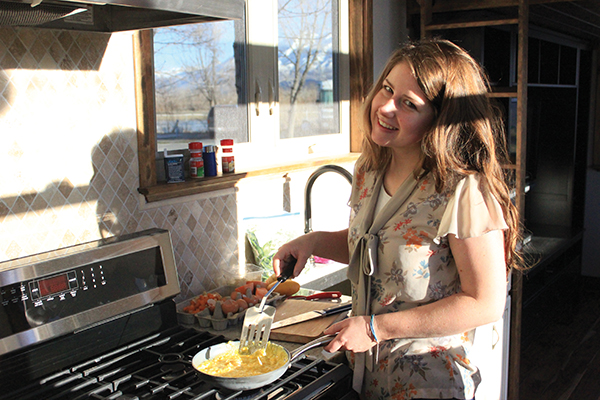 I walked toward the tiny home I would be staying the night in, and a 20-week-old yellow Labrador awkwardly galloped over to me before collapsing at my feet. I took it as a good sign and gave Jack his fair share of attention before approaching the tiny home created by Alpine Tiny Homes, a business based out of Vineyard that builds custom minimalist homes.

My palace for the night is eight feet by 28 feet  — 224 square feet not including the loft — and it looks like a trendy tiny home straight from a Pinterest board, including full-size stainless steel appliances, granite countertops, a large flat-screen TV, rustic wood accents and a skylight in the master loft. I immediately know I’m going to love it here.

Alpine Tiny Homes started out when Boyd Riding, vice president, was excited about the concept of miniature living. He wondered if there was enough of a market for it and, after a little analysis, he knew going tiny was a big way to go.

He officially started the company in December 2015, and in just over a year the company has built custom tiny homes for people all over Utah and the United States.

Boyd started constructing residential homes when he was only 14 years old and hasn’t looked back — though his houses have decreased in size.

As the company’s vice president, Boyd Riding, shows me around, I feel his excitement for his products.

“This is fun,” Boyd says. “Everything is unique. It’s a new challenge, and it’s different every time.”

My stay in the home really was fun, even though the Labrador didn’t stay with me. I’ve wanted to live in a tiny home or van for a long time, but had never had any experience other than seeing the homes on Pinterest and Instagram. This was my chance to try out tiny for myself.

I got to the home right after scuba diving (see article here), which was perfect so I could test out the shower. I also cooked, read a book, and even took a nap. I felt like a lifestyle blogger who posts Instagram pictures of her super cute space.

The entrance to the bathroom was a pocket door, which was illustrative of how the plan maximized available space. Just inside was a washer/dryer combination, hanging rack, tankless water heater, sink, toilet and shower.

The real question I had going into this adventure was whether the shower would pass the test of washing my very thick hair. I was pleasantly surprised. I could comfortably stand in the full-size shower, the water was hot and the Kohler showerhead easily cleaned my hair. It was better than the shower in my Provo apartment.

The model I stayed in is the “Teton,” which has two loft spaces with ladders leading up to them. I moved the ladder out of its tucked-away position and climbed to the loft with the bed. The mound of pillows and cute yellow, blue and gray bedding must’ve distracted me because I slammed my head into the roof.

I removed some pillows from the mattress and bang — strike two.

I learned my lesson after the second hit, but I did bump and bang into the ceiling a few other times throughout the night. Turns out lack of headroom was an adjustment for me.

My workout in the morning wasn’t yoga on the hardwood floor with sunlight streaming in and it wasn’t a brisk jog around the KOA campground where the tiny home was set up; it was making the bed. With the slanted roof and narrow space, the skylight was my saving grace in giving just a little extra room to move around and make the bed.

I love to cook and looked forward to this part of my stay. The large kitchen in my apartment is generally covered in dishes and food by the time the meal is done. I decided to keep it simple for this morning meal and stick with tried-and-true breakfast burritos. I was nervous about counter space so I suppressed my inner Martha Stewart and avoided preparing an extravagant meal. A friend came to cook with me and we whipped up the burritos in no time. I peeled a sweet potato and scrambled eggs while he cooked onions and overseasoned the food.

There was plenty of space for the two of us and the size of the kitchen didn’t bother me. I think having the full-size appliances and large stainless steel sink helped, even though we were basically in a narrow hallway. There was a bar along the wall where we sat and ate rather than eating in the living room on the couch. It was nice to have seating options, even in such a tiny space.

Granted it was fewer than 24 hours I was actually “living” in the home, but I feel I could live in one. It was cozy and organized, and I could tell I’d like the sustainability and the anti-consumerism mentality it would quickly give me — there’s just no room for extra stuff.

And it’s not just the hippy in me that the tiny home movement appeals to. Chris Riding, who works with his brother Boyd, told me the majority of their clients are older, retired couples who are looking to downsize and experience more life rather than more things.

Sounds like a pretty good trade-off to me … one that’s probably worth a few bumps in the loft every now and then.

Weekend best bets: 5 Utah Valley events to get you outside Previous post

Snapshots of the heart: With all their hearts Next post