Home Life Snapshots of the heart: With all their hearts

Snapshots of the heart: With all their hearts 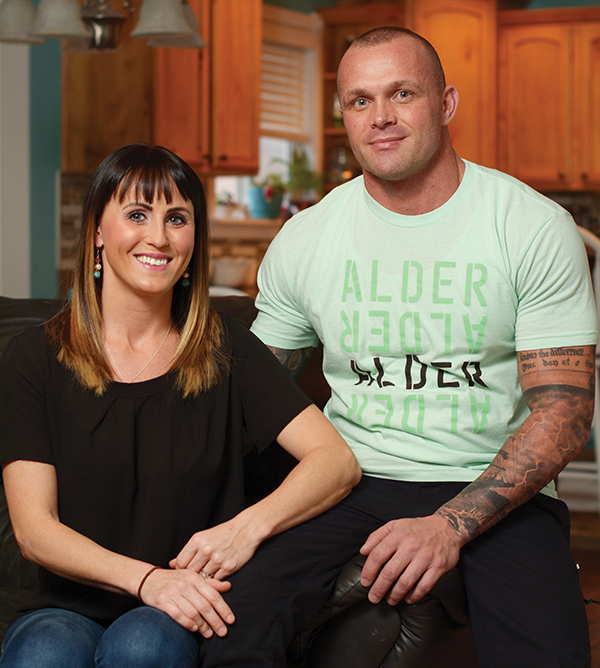 Stephanie Oldroyd stayed by her husband’s side through his drug addiction. “Being together for so long I knew who he really was,” she says. (Photo by Dave Blackhurst/UV Mag)

Each morning before he leaves his Saratoga Springs home for work, Shaun Oldroyd says goodbye to his wife, Stephanie, with a kiss and an “I love you.”

Stephanie knows he is sincere, unlike years before when his drug addiction would cause the words to feel empty.

“In the past when I would say, ‘I love you,’ there was nothing to back that up,” Shaun says. “Today it’s different. There are actions behind that instead of being numb and just saying ‘I love you’ because it’s what you’re supposed to say when you’re married.”

The two first met in junior high on a summer day in Provo Canyon. They exchanged numbers and then dated on and off for years. Eventually they built a home together in Saratoga Springs, which acted as a catalyst to their October 2004 marriage.

But their happily ever after was delayed when Shaun saw his friends sell prescription drugs and decided to do it as well.

Other drugs followed — cocaine, heroin and other opioids. At first it started out as a way to make money, but after experimenting with the drugs himself, Shaun became an addict.

In 2009, he signed divorce papers in jail and Stephanie planned to sell the house and move to take a new position in the company where she worked. But that plan changed.

“Somehow I got pregnant,” Stephanie says. “We had tried before and couldn’t conceive, and then out of nowhere I was pregnant.”

“In the past when I would say, ‘I love you,’ there was nothing to back that up. Today it’s different. There are actions behind that instead of being numb and just saying ‘I love you’ because it’s what you’re supposed to say when you’re married.” —Shaun Oldroyd

So Stephanie decided to stay in the home and stay married to Shaun. He left prison with a newfound desire to change. But when the stresses of fatherhood and running into friends combined, old habits reemerged.

In 2013 Shaun decided to get proper help and started to look at rehab facilities. Since Stephanie had left her job, the two didn’t have health insurance and had to pay for treatment out-of-pocket.

“But paying for it helped,” Stephanie says. “We only had enough to get him 30 days of treatment, so we hoped this 30 days would stick.”

Shaun has been clean for four years and now works as the program director for the male facility at the same rehab he attended — the Phoenix Recovery Center.

Their relationship thrives as they’ve learned to focus on what really matters, including their three children.

“We’ve learned not to sweat the small stuff,” Stephanie says.

She treasures the big way she starts each day.

“I love to get that kiss goodbye and ‘I love you’ every morning,” Stephanie says.

I tried it: Writer Kjersten Johnson moves into a local tiny home for a big night Previous post