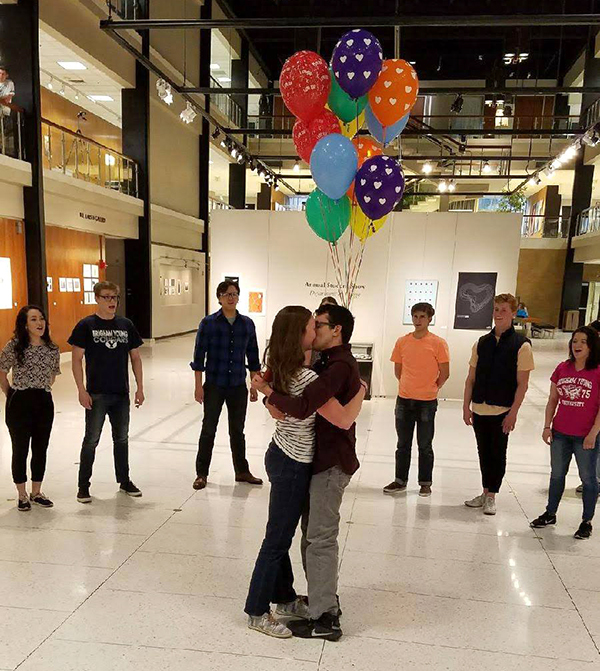 Carrie Ostler and Andrew Justvig got engaged at the BYU Harris Fine Arts Center on Monday, April 10, with the help of the cast from BYU’s production of “Mary Poppins.” (Photo courtesy Andrew Justvig)

Disney has played an important role in Andrew Justvig’s life.

A Disney aficionado, the BYU theatre student dreams of working for the entertainment beast. He has worked for Walt Disney World. And now Disney has brought him to his fiancee, Carrie Ostler.

And their romance is a Disney movie in the making. The “once upon a time” started in January while the “happily ever after” began on April 10, 2017 when Justvig proposed and Ostler said yes.

Justvig and Ostler met at South End Market, just south of the BYU campus, where Justvig asked Ostler to help him get a Dr. Pepper. As the two conversed, Justvig told Ostler about the play he was performing in at BYU, Disney’s “Mary Poppins,” and invited her to see the play.

“She will tell you that after I left, she was just so intrigued by me and had a million questions for me,” Justvig, who has cerebral palsy, wrote in an email. “She had no idea if I was a BYU student or a community member or what. She’s seen me in my motorized wheelchair around campus, but thought I was grumpy because I drove my wheelchair fast and wore a Grinch hat.”

The two parted — and Ostler was intrigued. So Ostler and her cousin went to see “Mary Poppins.” While she didn’t talk to Justvig that night following the performance, she went home and friended him on Facebook. When Justvig received the friend request, he felt impressed to message her, which led to the two messaging back and forth all day.

“We talked all day Sunday both pretty much asked each other out at the same time, and we got together that night,” Justvig wrote. “Two days later, on January 31, I took her to dinner at Brick Oven and snuck her backstage of ‘Mary Poppins.’ That night I asked her to be my girlfriend right before the song, ‘Anything Can Happen,’ and we’ve seen each other every day since.

“This song touched both of our hearts during the production of ‘Mary Poppins’ and explains how we both have faced trials, but always had an optimism of faith. … ‘Anything Can Happen’ is a song that reminds me that the impossible can happen and dreams do come true.” — Andrew Justvig, BYU theatre student

Three months later Justvig proposed with that song (and a little help from the cast of “Mary Poppins”).

“This song touched both of our hearts during the production of ‘Mary Poppins’ and explains how we both have faced trials, but always had an optimism of faith,” Justvig wrote. “We weren’t looking for love, but love found us. For me, the song is more personal because having cerebral palsy, I have faced naysayers, doubts, and criticism of who I am and my dreams. I was told I would never walk or live a normal life, but I’m dancing and singing in shows, pursuing my dreams of working for Disney, and now I get to marry my best friend who dreams bigger than I do! ‘Anything Can Happen’ is a song that reminds me that the impossible can happen and dreams do come true.”

The “Mary Poppins” cast was happy to help Justvig with his proposal as the cast had all seen the couple’s relationship blossom as Ostler would spend time with Judvig backstage during the show.

“People ask me if I was surprised to get engaged that night. The answer is yes. Was I shocked by what Andrew did? Not really,” Ostler wrote in an email to UtahValley360. “Those who know Andrew know that nothing about that production was atypical at all. He’s a showman, loves a good surprise, and knows how to make those he loves know it. I know that proposal was all for me, not for my parents, friends, or Facebook. The location, song, and crowd were hallmarks of our relationship. What a wonderful start to an incredible future.”

The couple is planning a late summer wedding in California.

Watch the proposal below.