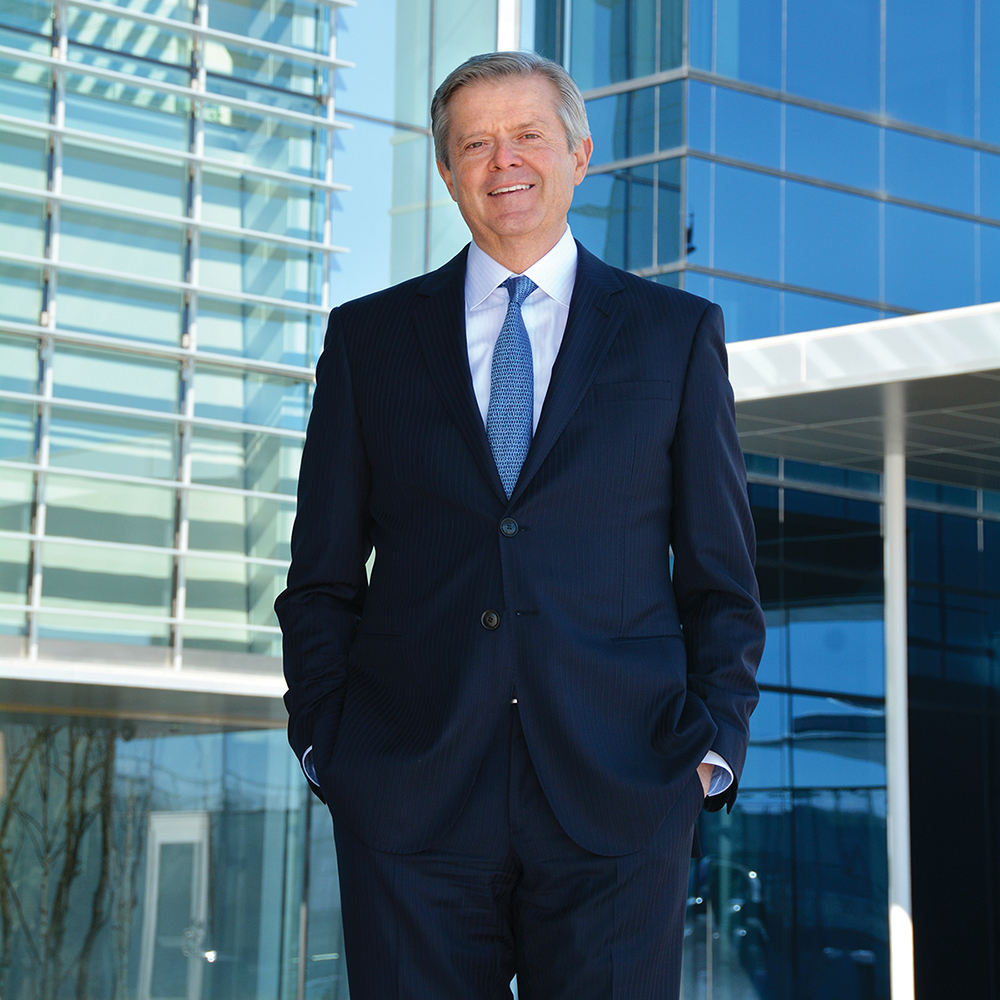 “I learned about a little company creating nutritious food for starving kids around the world. the folder sat on my desk for weeks until I realized how many children had died during that time,” says Truman Hunt. “I took Blake (Roney) and Steve (Lund) out to this local company and we could see the possibility of our Nu Skin family getting involved in the humanitarian endeavor. We walked to the parking lot, and Blake said to me in his vernacular, ‘Anything we can do that tricks people into doing something good is a good thing.’ I went back in and negotiated a deal, and now we’ve generated 500 million meals through Nourish the Children.” (Photo by Dave Blackhurst/UVBizQ)

Truman Hunt and Blake Roney met in the mission field while speaking French.

The two said bonjour again as roommates at BYU and later bishopric-mates in an LDS ward. Then the two left on splits as Roney founded Nu Skin while Truman earned a law degree. But the au revoir didn’t last forever. In 1996, the old became nu again and Roney hired Hunt to take the Provo company public.

“I thought I would get that project done and move on. I didn’t see myself spending a career in direct sales,” Hunt says. “But in the course of the nine-month process of going public, I fell in love with the business. Now 20-plus years after standing on the New York Stock Exchange, our company is in better shape than ever and I’m proud to have spent my career in this market.”

Hunt became president and CEO in 2003 and is now stepping down after 14 years to serve a three-year assignment as an LDS mission president in the California San Jose Mission. Previous Nu Skin CEOs Roney and Steve Lund also left the direct sales company to lead missionaries.

LOVE THE SKIN YOU’RE IN

1. Billion with a B. Under Hunt’s 14-year watch as CEO, the Nu Skin campus has grown to include several glassy buildings in downtown Provo and increased to nearly $3 billion in annual revenue.

2. Let’s do lunch. Nu Skin added to the downtown dining scene with its open-to-the-public restaurant ‘The Spoon,’ named for the utensil used to fill the first Nu Skin products. Hunt’s favorite dish is the salmon salad, and he’s known for sitting down in the high-ceiling dining room with anyone from upper management to a new hire.

3. Heart of stone. The lobby of the Nu Skin campus is floored with rectangular SLABS of stones, including one inscribed with a truman hunt quote in front of the indoor fountain. “There is power in dreams, in imagination, and in the courage of those resolved to make their dreams a reality.” Before the rock was installed, hunt and other executive leaders signed the back.

“Blake is one of the most visionary and fun people I’ve ever been around,” Hunt says. “Steve has one of the most solid characters anyone will ever encounter. I try to be a blend of the two, and I see myself as the bridge between the founders who are very entrepreneurial and a more institutional approach of running a business as we spread throughout the world.”

Under Hunt’s leadership, the company has taken its scientifically backed lotions and potions to 50 countries around the globe and at one point hit $3 billion in annual revenue ($2.21 billion in 2016).

Hunt recalls a day when Roney asked him to come down the elevator and out to the street, where three new Audis were parked on the curb. The duo drove each one, and then Roney asked if Hunt wanted the S4, A6 or the A8.

“I said, ‘Blake, we can’t do company cars! Everyone will feel like they have to have one, and there’s no end to the number of people in our building who deserve a car,’” Hunt recalls, adding that he didn’t feel comfortable with the conversation. Roney insisted it was a personal gift and that if Hunt didn’t select a car, there would be a coin toss.

“That afternoon, I had the keys to an Audi A8 on my desk,” Hunt laughs.

Hunt has a reputation for remembering distributors’ names and asking follow-up questions months and years later about family details and hobbies. He recently learned of a top sales distributor fighting for her life, and Hunt jumped on a plane to lift her spirits just days before she passed away.

Although Nu Skin has a philanthropic heart that beats around the world and our community, one of Hunt’s favorite days is when he spreads the love under his own roof. At Christmastime, Nu Skin employees can donate to colleagues who have medical bills or other challenges. When donations (individual and corporate) are collected, the employee gets called to meet with the CEO, and Hunt showers them with his signature kindness before handing them an envelope.

“I’m going to miss the daily interaction with people I love,” Hunt says. “There isn’t a more ‘people business’ than this one, both internally and externally. I love being part of a global family of like-minded people, and it will be difficult to separate myself from that for a few years.”

For his leadership, the Nu Skin family says merci and au revoir.

Made in UV: Mountain shelves and rocky necklaces Previous post

Utah Valley mortgage company is paying out $5,000 in a video contest made for first-time home buyers Next post