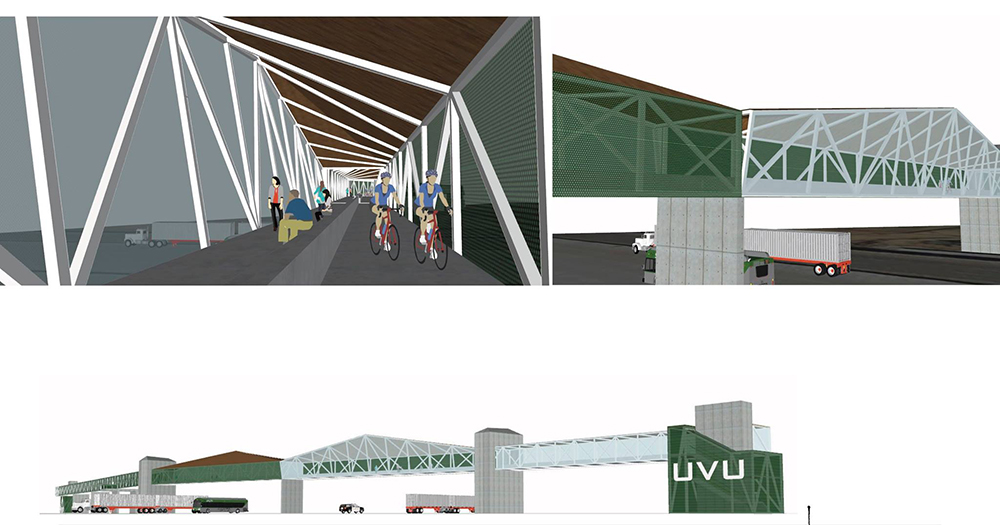 This is one of two conceptual designs by Mountainland Association of Governments for the UVU pedestrian bridge. (Image courtesy Orem City)

Crews will start building a bridge next spring — if everything goes as planned — to connect the Orem FrontRunner station to Utah Valley University.

The bridge, about a half mile long, will pass over the Union Pacific and FrontRunner tracks, Interstate 15, some private property, 1200 West and end at the L14 parking lot, aka the lot just south of the track. It will be 16 feet wide, and have lanes for pedestrians and cyclists, said Frank Young, UVU’s associate vice president – facilities. In addition, it likely will have some UVU branding on it.

“It’s a great, safe connection between our east and west campuses,” he said.

Now, students and faculty that use FrontRunner either have to wait for a bus to bring them from the station, at 1350 W. 900 South, or they walk or bike. So the walking or biking route takes them down Geneva Road and across I-15 on University Parkway. “It’s not really meant for a lot of pedestrian traffic,” he said. “This will would be a straighter, shorter connection.” 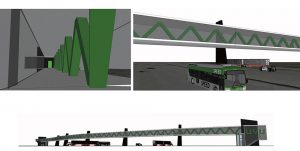 The second conceptual design by Mountainland Association of Governments for the UVU pedestrian bridge connecting the campus across I-15. (Image courtesy Orem City)

So with the bridge, FrontRunner riders will have a safer, faster path to campus. Plus, students with classes on both sides of campus will have a new route, Young said. In addition, new student housing west of I-15 may mean 6,000 new beds. The bridge will be a way for those students to get to campus without driving.

The bridge is happening now because the state Legislature approved $4 million in transportation bonds for the project. UTA will pay that back over 10 years. In addition, UVU is contributing $3 million and UDOT $7 million.

It has undergone a design process through Mountainland Association of Governments. So now the Utah Department of Transportation is taking the reins of the project, Young said. UDOT officials will do more design work, and it may be ready to go out to bid in eight months.