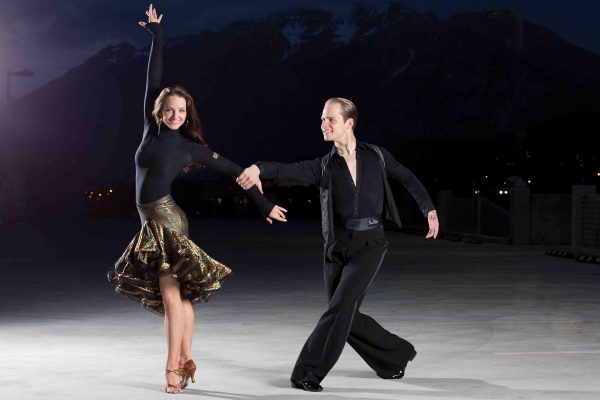 Kayci (left) and Casey (right) Treu share a first name, a last name and a love of dance. (Photo By Kelsi Lou Productions)

As national and international ballroom dancers, Casey and Kayci know how to keep their toes in line and match choreography. But they break the routine in one major way — they share a last name, Treu.

“It’s taboo to date your dance partner,” she (Kayci) says. “You don’t do that because basically dance partnerships are everything a marriage is — but without the romance. There’s money, planning, goals and communication.”

His interest in her began before the two met thanks to hearing all about Kayci from his sister who was also on the BYU Ballroom Dance Company. So the two auditioned to be dance partners — but he had one condition. If they were to be dance partners, she would have to agree to go on a date with him.

“He told me later that if I said no he would have not danced with me at all — he would have just dated me because he was that interested,” she says.

So the terms of the agreement were set and the duo became dance partners spending their time foxtrotting, waltzing and quickstepping.

“It’s taboo to date your dance partner. You don’t do that because basically dance partnerships are everything a marriage is — but without the romance. There’s money, planning, goals and communication.” — Kayci Treu, BYU ballroom dancer

“We didn’t spend any time apart,” he says.

In March 2016 they added a marriage relationship to their dance step.

“Ballroom is a partnership between a man and a woman, and we each present skillsets and abilities,” she says. “We have our own roles to play but within those roles we are each giving 100 percent of something. I don’t bring 50 and he brings 50 — we each bring 100 percent.”

“If you get frustrated in the practice room, we leave that there and go home — you don’t want to take that with you,” she says. “If something is going on at home, you don’t bring that into the practice studio.”

Casey and Kayci have found being life partners and dance partners has benefited their dancing.

“The only way you will fulfill your true potential is by being with someone who will help you grow,” he says. “You draw on each other’s strengths — the things you may be strong in may be the other’s weaknesses, but you both have things to contribute.”