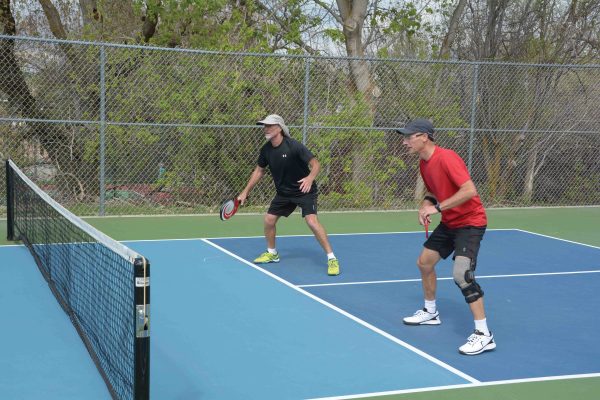 Tyler Sheffield (right) plays pickleball with Larry Moon (left) in his Highland backyard and at the community park right behind his house.

It’s hard to tell Tyler Sheffield apart from Larry Moon on the pickleball court. They’re the same height, about the same weight and both in their 60s.

“I get called Tyler and I don’t even correct people anymore,” Larry says.

The pair has played pickleball together for five years competing in nearly 30 tournaments and winning a handful of national championships.

Tyler, who lives in Highland, first became involved in pickleball while building his house. He thought of putting a basketball court in his backyard until a Google search led him to put in a pickleball court instead.

“I had never heard of it, but I made the concrete slab a little bit bigger and ordered a starter kit,” Tyler says. “We didn’t know what we were doing. We just played.”

With time and with tournaments, pickleball started to occupy Tyler’s leisure time and eventually led him to meet Larry (of Layton) who stepped in when Tyler’s partner got injured. The two realized they matched well for matches, especially since they could also compete in age-specific tournaments.

“We had a lot of success,” Larry says. “We get along together, play similar styles and we have a lot of fun.”

Even though the two live over an hour apart, they find ways to play together  — and if they can’t swing paddles together, they practice separately knowing their styles will perfectly merge the next time they reunite.

“You don’t see many people who partner together for so long,” Tyler says. “They’re always trying to get something better or don’t get along. I’ve never had hard feelings for Larry and as long as he’ll partner with me, I feel lucky to do it.”