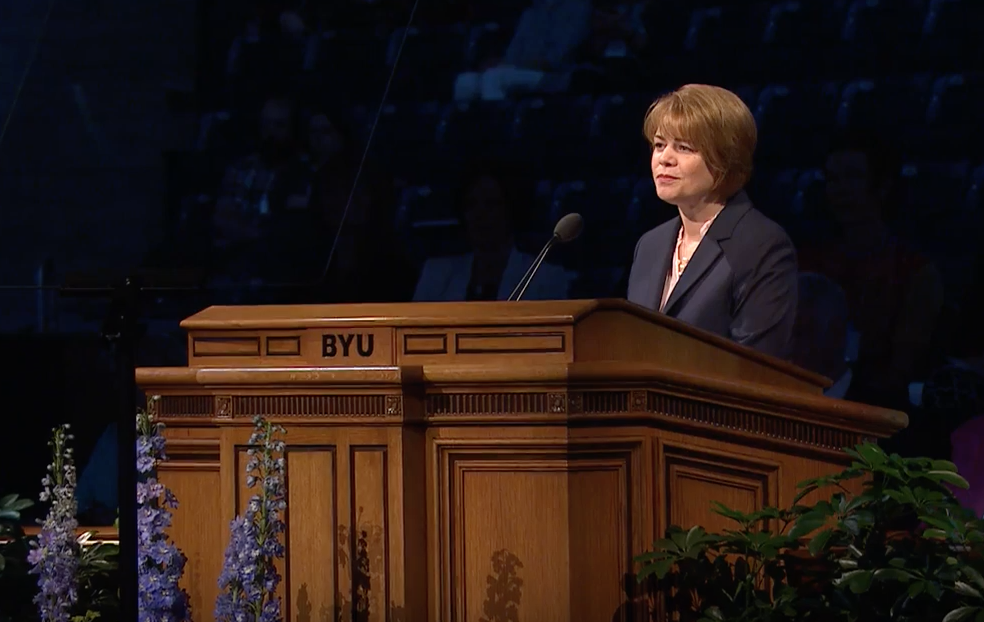 In her opening address for BYU Women’s Conference Thursday morning, Sister Sharon Eubank shared the role of Relief Society in combining faith, family and relief to pave the road for conversion.

Sister Eubank said conversion can be a group effort at the conference the university hosts annually in partnership with the Relief Society, the women’s organization for The Church of Jesus Christ of Latter-day Saints

“Relief Society is exactly the place for all of us who don’t fit in,” Sister Eubank, first counselor in the general presidency of the Relief Society, said in her remarks.

“Relief Society is exactly the place for all of us who don’t fit in.” — Sister Sharon Eubank, First counselor in the general presidency of the Relief Society

As part of her address, “… Converted unto the Lord,” the LDS Church leader told women they are part of a special and unique women’s organization.

“We can’t give in to those voices who just say, ‘Well, it’s just like a sewing circle or it’s a book club for people who have the same interests,'” Sister Eubank said. “If you don’t have those same interests or that same background, then you don’t fit in. No, Relief Society has a work to do on this earth. When you belong to Relief Society, you are part of that work.”

She then shared a long list of differences amongst women that describe members of the Relief Society.

“Can we open up the circle of our sisterhood to many more kinds of backgrounds, and see those backgrounds as valuable instead of as handicaps?” Sister Eubank asked.

She continued by talking about a role she has that could have made her feel like a misfit in the family-focused church — a single woman. Instead of allowing herself to distance herself from the Relief Society because she didn’t fill the role of motherhood along with so many of her sisters, she found comfort in the organization.

“On a very powerful, emotional level, I felt like I had been stopped from being a creator and I wasn’t able to use my eyes to look beyond the barriers of this life,” Sister Eubank said. “Do you know what helped me get past this heavy grief, honestly? Relief Society. I was around women who acknowledged emotionally that I was still a creator. That not having my husband and my children with me at this time was temporary. I have being a being with creative gifts for millennia.”

22 high schoolers who will change the world Next post