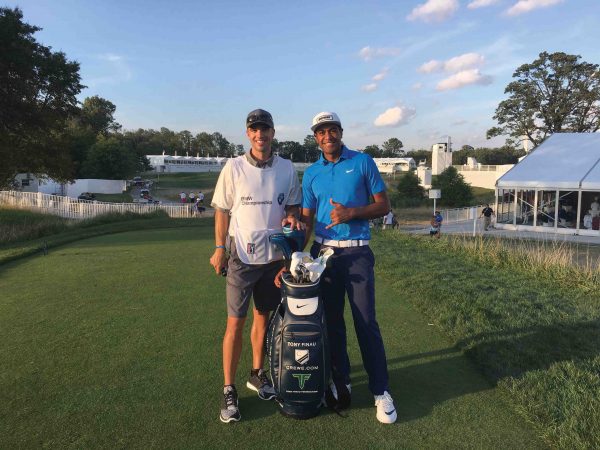 Tony Finau of Lehi (right) lives over 800 miles away from his caddy, Greg Bodine, who is based in Seattle. During the season, the two spend four to eight hours a day together.

As his third straight birdie sunk into the 18th hole, Lehi’s Tony Finau claimed his first PGA Tour title at the Puerto Rico Open in March 2016.

By his side was his caddy, Greg Bodine, who had just rejoined Tony’s team after giving up the game temporarily to heal a broken leg. Tony is at the top of his game when Greg is inside the ropes.

“We’re both Christian, so we both had faith in God that things would work out,” Tony says. “A couple weeks after he came back having not been on the bag for a couple of months, we were able to win, so that was a testament to the faith we both have.”

Tony first met Greg on the course. Since Greg’s cousins are both pro golfers, (Michael and Andrew Putnam) Greg had met Tony and played rounds with him before — and their personalities were on par. So when Greg heard of Tony’s search for a caddy during his rookie year (2014-15) on the PGA Tour, Greg took a swing and sent him a Twitter message.

“We were similar ages and had similar interests so I just reached out,” Greg says.

When Tony flew Greg to Arizona for a trial run, the two discovered it wasn’t just their height (6-foot-4) and age (now 27) that aligned.

“In golf the only person who can help me inside the ropes is my caddy,” Tony says. “I knew with my experience playing professional golf I wanted a caddy like Greg.”

One of Tony’s favorite things about Greg is his demeanor, especially his ability to stay calm during high-stress situations. Tony says when they qualified for the PGA Tour, Greg didn’t even flinch.

Outside of Tony being a great golfer, Greg loves the example the Lehi father-of-four sets, especially since the caddy and his wife expect their first baby boy to arrive on May 15.

“I’ve become a better person the more I’m around Tony,” Greg says. “The company you keep creates who you are, and if you aren’t around the best person every day for nine months of the year that wears on you.”

Over the course of his career, Tony has earned more than $5 million. With this success, he’s created the Tony Finau Foundation.

“I grew up in North Salt Lake Rose Park,” Tony says. “It’s a little more of a rough area, and I obviously didn’t come from a lot of money. I knew if I was ever successful I wanted to give back to that area and to the kids who are less fortunate.”

Each year, the Tony Finau Foundation hosts a golf classic here in Utah County along with a luau that pays tribute to Tony’s heritage. Tony is the first person of Tongan and American Samoan descent to play on the PGA Tour.

“The biggest sports in our culture are football and rugby — golf isn’t on anyone’s radar,” Tony says. “I like doing something different. If you love something and have enough passion to pursue it, why can’t you do it? I’m proud to be the first and I’m proud of where I am from and that I can represent my people.”