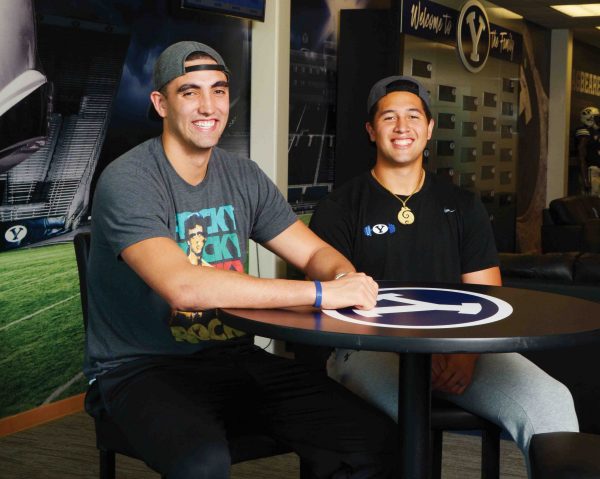 Cougars Corbin Kaufusi (left) and Va’a Niumatalolo (right) didn’t like each other when they first met. Now they’re known for their bromance. (Photo by Dave Blackhurst/UV Mag)

Corbin Kaufusi and Va’a Niumatalolo both don Cougar blue at LaVell Edwards Stadium and they both have football coaches for dads. The two athletes frequent In-N-Out Burger and McDonald’s and are known throughout the BYU football team for their bromance.

“We are like the same kid but he got stretched out more than I did,” Va’a says of 6-foot-9 Corbin, who he calls Gigantor.

At the Kaufusi home in Provo, Va’a is known as “Little Kenny.”

“I’m 6-foot-1 and 235 pounds and their home was the first where I was the smallest person in the house, so I literally was Little Kenny,” Va’a says.

Although he goes by Va’a, that’s actually his middle name.

THANKS FOR THE MEMORIES

Football memories dot the timeline of Va’a and Corbins’ friendship, whether it’s playing with BYU or watching Navy games. During their freshman year, Corbin and Va’a watched a Navy football game together in the dorms. Navy was up against their rival team, Army.

“Navy scored and Va’a got so pumped he tried to pick up one of the lounge chairs in the dorm and throw it but he couldn’t pick it up,” Corbin says. “He underestimated how heavy it was.”

“It wasn’t because I remembered it moved,” Corbin says.

“It’s because I ripped out the screws,” Va’a says. “I was that strong.”

The teammates/BFFs cheer each other on when they’re wearing their helmets.

During BYU’s 2016 homecoming game against Mississippi State, Corbin forced a bad throw by the opposing quarterback in double overtime, which ended the game and gave the Cougars the win. Fans stormed the field, and Va’a paralleled the fans’ excitement for Corbin’s big play.

The friendship between Corbin and Va’a extends to their families, including their football-coaching fathers. Steve Kaufusi is the BYU linebackers coach and Ken Niumatalolo is the Navy head coach (of “Meet the Mormons” fame). Corbin has visited the Niumatalolo family in Maryland.

“This guy talks big smack about roller coasters,” Va’a says. “We went to Hersheypark and we have photo evidence that I was enjoying it and he was freaking out.”

“It’s just my enjoyment face is so different from yours,” Corbin laughs.

When the Baltimore Ravens drafted Corbin’s older brother, Bronson, the Kaufusi family rejoiced knowing he would be close to the Niumatalolos. But Bronson’s first NFL season ended before the first game. During training camp, a teammate fell into his leg and broke Bronson’s ankle.

“Bronson was so excited to start his first year in the NFL so this was heartbreaking for him,” Corbin says.

When Va’a heard about Bronson, he asked his dad to visit him. Ken traveled there and gave Bronson a priesthood blessing.

“Bronson was so grateful,” Corbin says. “He could not believe that there was someone out there that he could turn to and especially someone as amazing as Ken.”

With Va’a in his senior year and Corbin in his junior year, 2017 will hold more football feats, more burger runs and plenty more dance parties for this bromance.

11 Utah Valley partnerships put the 'do' in 'duo' Next post