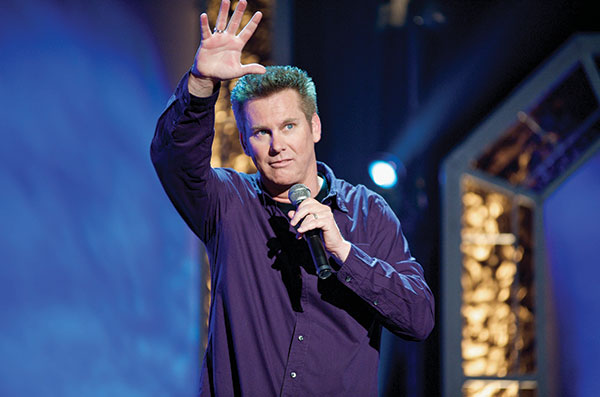 Brian Regan joined the lineup for the 2017 Stadium of Fire. (Photo courtesy of Brian Regan)

Regan joins country group Little Big Town and country singer Hunter Hayes, which were announced as the 2017 headliners in March.

Regan is known in Utah for his “clean comedy” acts and selling out shows at Vivint Smart Home Arena. He recently signed a two-special deal with Netflix, joining Jerry Seinfeld, Chris Rock, Dave Chappelle and Louis CK in multi-special deals.

“It’s cool to go out there and entertain people for an hour,” Regan told Utah Valley Magazine in an interview, “but it is also a little scary too, because if you’re in a big giant production and it isn’t going well you can go, ‘It’s not me, it’s these other people around me.’ But if you’re on a stage by yourself and it’s not going well, you just have to go, ‘It must be me.’”

Besides these national performers, the Stadium of Fire celebration will hold patriotic festivities including flag-waving skydivers, fireworks and performances on the field by local dancers. For the first time ever, the firework finale will include a laser show.

Stadium of Fire hosts approximately 40,000 people annually at LaVell Edwards Stadium, but the performance reaches a wider audience. The event is broadcast to more than one million military men and women in more than 100 countries via the American Forces Network. The 37th Annual Stadium of Fire will be on Saturday, July 1.

Tickets to Stadium of Fire are for sale on stadiumoffire.com and at the BYU Marriott Center ticket office in Provo.

11 Utah Valley partnerships put the 'do' in 'duo' Previous post

5 training tips for a more successful downhill race Next post