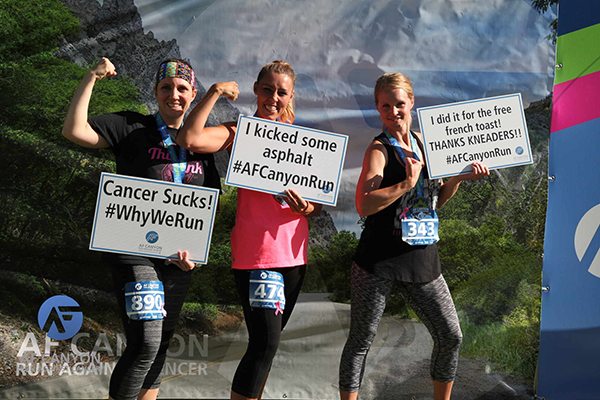 Like many Utah races, the AF Canyon Run Against Cancer (June 24) is mainly downhill — 2,484 feet downhill to be exact.

In the seventh annual race hosted by Intermountain, approximately the first eight miles are in American Fork Canyon.

“The descent can be really rough on your quads,” says Derick Woolf, a physical therapist at Intermountain Hospital in American Fork. “There is a long, flat section of the race at the end of the canyon, and if you get ‘spent’ slowing yourself down hill the first eight miles, then you have a hard time getting to the end of the race.”

In order to protect your knees and health come race day, Derick shares five tips in training for a downhill race.

While Derick doesn’t recommend training for the AF Canyon Run in the American Fork Canyon (the race provides blocked off areas and safety measures not available on a daily basis), he does recommend running a similar canyon in preparation for race day.

Stretching is both a workout opener and a closer. Derick recommends doing dynamic stretching (stretching that requires movement) before the race and static stretching afterward.

Derick says runners need to strengthen different muscle groups. “I’m a huge proponent of cross training in preparing for a race, like bicycling or swimming that will work another group of muscles,” he says.

Trade in the pavement for the weight room as part of your running regimen. For runners, Derick says the most important muscle groups to strengthen are first, legs and second, core.

As a general tip for race training, Derick says you need to add an extra minute of sleep per night for every mile you add to your training each week.
“Sleep is critical. That’s when we recover from the impact,” he says.

Learn more about the AF Canyon Run Against Cancer at afcanyonrun.com.