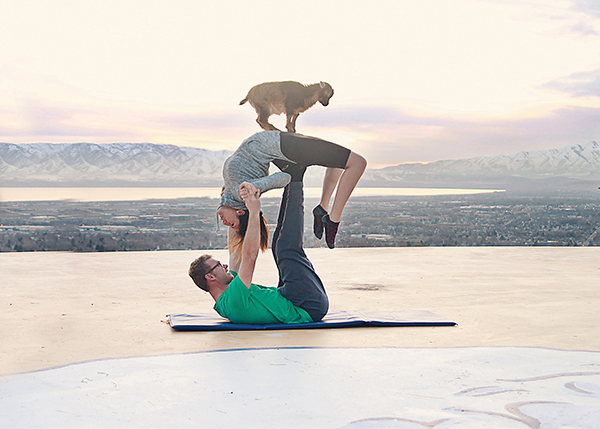 GOGA co-owner Benson Richardson does a yoga pose with instructor Valeria Larios and one of their four “kids,” Dew. (Photo by Ryan Turner/UV Mag)

Doing downward dog with a goat on your back is a thing now, and Utah County isn’t kidding around.

Imagine you’re looking out over the valley — toes at the top of your yoga mat — and breathing in the crisp mountain air. And then imagine a goat on your mat with you. Welcome to Goga.

BYU student Benson Richardson and UVU student Derek Westover both grew up on farms in Weiser, Idaho. Benson has done yoga for several years, and when he saw the fad in Oregon for yoga with goats, his and Derek’s business plan came to life.

While they admit to “riding the wave of the trend,” Benson and Derek are sold on combining yoga zen with animal therapy. “It’s positive, spontaneous fun,” Benson says. Having goats nibbling on hair, jumping on backs or lying down on a yoga mat makes yoga less competitive and judgmental for participants, yoga instructor Valeria Larios says.

Valeria happened to be doing yoga near the goat-filled class one day. She met Benson and Derek and started teaching with them shortly after. “I always like to do things that are different,” Valeria says. “So this is it.”

It appears Utah County likes things a little different, too. Goga classes started the beginning of March, and there has been no shortage of goats or participants since.

The four kids are named Dew, Pepsi, Pepper and Fresca, and they like to put a little mayhem into each class. As two goats climb on yogis, another chews on shoelaces and the last rips a mat, Valeria laughs. “These are the surprises that you get when you come to Goga,” she says.

Classes are $10 per person on Eventbrite and are held once per week in either Pleasant Grove at the Battle Creek Trailhead or in Provo at the Y Mountain Trailhead. Up-to-date information can be found on the Facebook page and Instagram.