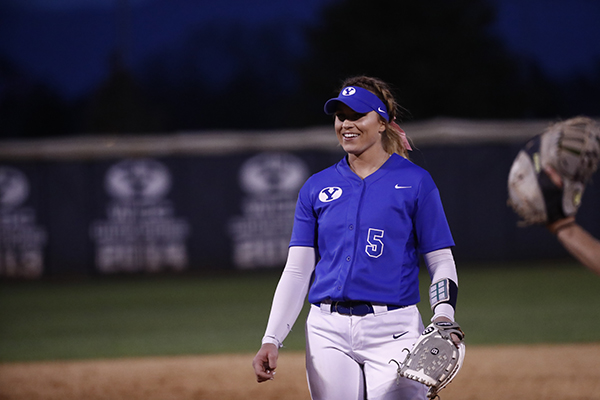 Every pitch McKenna Bull throws for BYU is a tangible result of blood, sweat and tears. From the backyard of her childhood home in Ogden, Utah to the circle at Gail Miller Field, Bull has put in countless hours into honing her skills.

What fans don’t see are the moments of frustration. Bull has hit a wall more than once. Moments have surfaced here and there where she quietly wonders if all the work it takes to master her pitches is worth the effort.

“There’s times where I thought, ‘I don’t think I can keep doing this,’” Bull said. “I would be on the verge of quitting and then I’d have success and I’d be like, ‘OK, that’s why I do it.’ You just keep moving until you get what you want. You just have to remember that everything gets better.”

No one can deny that things keep getting better for both Bull and BYU.

The No. 20 Cougars (44–11) have clawed out a spot as one of the nation’s top softball teams this spring and their senior ace is the driving force behind it. Bull boasts a 29–5 record in 38 appearances this season. She has struck out 226 batters and sports a 1.23 earned run average. At one point this spring, Bull pitched a school-record 57.2 consecutive scoreless innings.

“She’s undeniably the best that BYU has had. There’s been great ones, but the record book definitely shows she’s risen above those great ones.” — Pete Meredith, BYU pitching coach

“She’s undeniably the best that BYU has had,” BYU pitching coach Pete Meredith said. “There’s been great ones, but the record book definitely shows she’s risen above those great ones. Credit to her. And she’ll be the first one to tell you she’s not done. There’s still more stuff she wants to do.”

This degree of consistent dominance is definitely not a new trend. Bull has shattered virtually every BYU pitching record during her four years in Provo.

She is the school’s career leader in wins (106), innings pitched (894), complete games (93), saves (13), shutouts (32) and strikeouts (906). Rewriting the BYU record books acts as a happy bonus for Bull. Her primary goal has always been lifting her team to success.

“Every year, I’ve been able to break at least one record and, sometimes, break some of my own,” Bull said. “I’ve never really tried to focus on it too much. It’s always exciting and if I hear I’m close, I’m like, ‘OK, got to keep pushing.’ Obviously, it drove me. But it wasn’t in the front of my mind all the time because I was trying to get the wins for the team.”

Bull has built herself into an elite pitcher through determination. She’s got a dominant rise ball and has made equal strides with her curve ball and drop. Her varied pitching arsenal has paid off by giving opposing pitchers headaches trying to figure out how to attack her pitches.

Her earliest expectations were to simply play. Bull never had any outlandish goals coming into the program. How everything has unfolded for her has been a pleasant surprise.

“Things have gone far beyond what I expected in the best possible way,” Bull said. “It’s just been a blessing to be where I am and have accomplished so many things.”

The BYU coaches new they had something special in Bull before her freshman season even started. She played an important role right away. Bull made 32 starts that season and became entrenched as the Cougars’ ace by her sophomore campaign.

Since that time, she has built her rise ball into something fearsome to the point where she rarely walks batters or gives up hits. 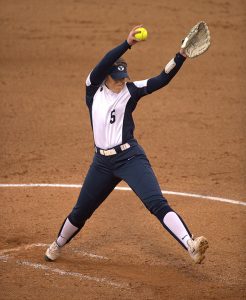 “The fruits of her hard work have really paid off,” Meredith said. “She’s a kid that’s wanted it with determination. Hats off to her for doing the above and beyond things to develop her skill set to compete at this level.”

One goal remains for Bull to accomplish in her career. She wants to help lead BYU past the NCAA Regionals.

The Cougars have failed to reach the Super Regionals or College World Series in each of the last three seasons Bull has been in Provo. Now they have one more shot.

BYU qualified for its 13th consecutive NCAA Tournament after winning a ninth straight conference title and fourth consecutive West Coast Conference crown. The Cougars will play in the Salt Lake City Regional where they will face Mississippi State on Thursday. Fordham and No. 13 Utah are the other possible regional opponents.

BYU has not faced the Bulldogs or Rams yet this season. The Cougars previously upset the Utes 4–3 at Gail Miller Field on March 22.

“This team has accomplished so much this year and we have so much left to accomplish that I’m just really excited to see how it turns out,” Bull said.

With Bull leading the way, the final chapter on this softball season for BYU could take quite a few pages to write.