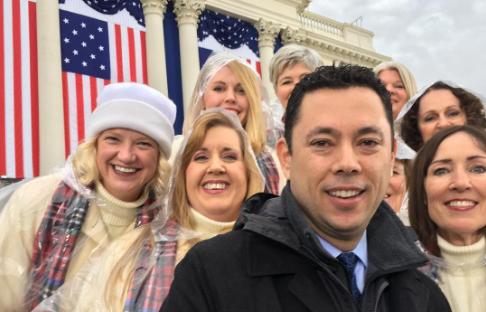 Jason Chaffetz stands with members of the Mormon Tabernacle Choir at the Presidential Inauguration in January 2017. (Photo courtesy of Jason Chaffetz Twitter)

Rep. Jason Chaffetz (R-UT) announced his resignation on his website Thursday afternoon. Chaffetz will officially resign from Congress on June 30, 2017.

“Serving you in the U.S. House of Representatives for nearly nine years has been a rare honor and privilege,” Chaffetz opened his letter to the 3rd District constituents. “When I first ran for Congress in 2008 I promised I would get in, serve, and get out. I told voters I did not believe Congress should be a lifetime career. I knew from day one that my service there would not last forever.”

“I’ve slept on a cot in my office largely to save money for the Chaffetz family, but also to remind myself that my service there was temporary,” Chaffetz wrote. “Though the time away and the travel have been a sacrifice, our family has always been united that public service was the right thing to do. We feel my time in congress has been well spent, but it now seems the right time to turn the page.

“I have very much enjoyed serving, but never for a moment have I thought that I was indispensable. I know others can and should serve. The House is known as the ‘People’s House’ because it is made up of a cross section of ordinary Americans who represent almost every walk of life – as it should be. While remaining true to my principles I have made the effort to ‘reach across the aisle.’ I count many Democratic members as my friends. I hope whoever replaces me will do even better.”