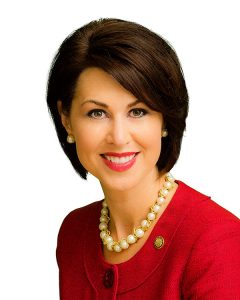 “We’re well organized and we’ve got a great ground game and we’re going to do well no matter what,” Henderson said on the Doug Wright Show Friday morning about her campaign.

Henderson began he legislative service in District 7 in January 2013. She was re-elected in 2016 for her second term.

Before seeking office herself, Henderson worked as part of Chaffetz’s team during his first political campaign. Her roles included political director and campaign manager.

“I would love if (Chaffetz) would finish out his term,” Henderson said on the Doug Wright Show. …”I believe him when he says that he’s had enough and he’s ready to be with his family more.”

In his letter Chaffetz wrote to members of the 3rd District, Chaffetz cited a need to spend more time with his family.

“I’ve slept on a cot in my office largely to save money for the Chaffetz family, but also to remind myself that my service there was temporary,” Chaffetz wrote. “Though the time away and the travel have been a sacrifice, our family has always been united that public service was the right thing to do. We feel my time in congress has been well spent, but it now seems the right time to turn the page.

Since Chaffetz’s term doesn’t technically end until December 2018, Utah will hold a special election to choose the 3rd District’s new representative in Congress. He will officially leave office on June 30, 2017.