Lifetime announces actress who will play Elizabeth Smart in movie 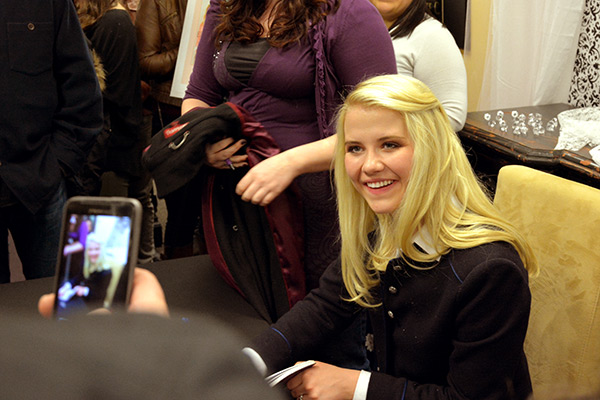 Elizabeth Smart signs a copy of her book, “My Story,” at Heritage School. Smart’s newest venture is being a correspondent for Crime Report Daily. (Photo by Rebecca Lane)

Boden stars in “Ride,” a TV series on Nickelodeon series about an equestrian boarding school. Skeet Ulrich, known for “Riverdale” and “Jericho,” will portray Brian David Mitchell, the man who kidnapped Smart. Deirdre Lovejoy, from “The Blacklist” and “The Wire,” will play Mitchell’s co-conspirator Wanda Barzee.

Smart’s story was shared in a CBS film, “The Elizabeth Smart Story,” in 2003. It was told through the eyes of Elizabeth’s parents, Ed and Lois Smart.

This time around, the story will be told from Elizabeth Smart’s perspective. The two-part biography special will include never-before-shared details about Elizabeth Smart’s captivity. It will be broadcast on A+E Networks and production began in May, according to Deadline.

In 2002, Elizabeth Smart made headlines when she was kidnapped from her bedroom in Salt Lake City. Smart, only 14 at the time, spent nine months held captive. Since her rescue, Smart has become a advocate of sexual assault survivors. She travels the country giving speeches, created the Elizabeth Smart Foundation and joined her foundation with Operation Underground Railroad.

“I’m so grateful for my experience,” Elizabeth Smart said in a speech. “I’m not saying that I want to be kidnapped again or that I ever wanted to be kidnapped the first time. I don’t. I didn’t. But I’m grateful for what it has taught me, for what it’s allowed me to do to become a voice for so many people who don’t have one or who are scared to come forward and share their own stories.”

In 2015, Elizabeth Smart wrote a memoir, “My Story,” with the help of Chris Stewart. For the first time, she shared her story in detail from her kidnapping at her home, through her nine months of captivity and on through her rescue.