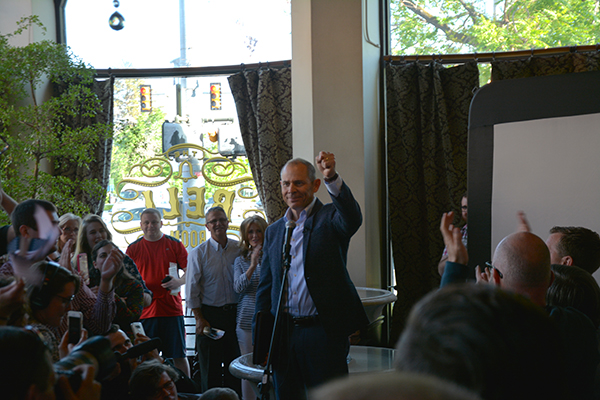 Provo Mayor John Curtis officially announced he will run for the 3rd Congressional District seat that Jason Chaffetz is leaving vacant at the end of June. (Photo by Rebecca Lane/UV360)

“Those of you who know me well know that I spent a long time trying to decide if this was the right thing to do,” Curtis said to a crowded room at The Bell in downtown Provo Thursday evening. “So long that the other candidates got a jump in a very short time period. But I had to know in my heart that this was the right thing for me, for my family and for the district. I’m here to tell you that I bring experience, engagement and effectiveness that nobody else can do.”

Curtis is basing his campaign on those three points which he exemplified during his time as Provo’s mayor: engaged, experienced and effective.

“I had to know in my heart that this was the right thing for me, for my family and for the district. I’m here to tell you that I bring experience, engagement and effectiveness that nobody else can do.” — Provo Mayor John Curtis

During his eight-year tenure as Provo’s mayor, Curtis cut 5.5 million in the city budget in his first year, brought Google Fiber to Provo, scheduled services at Provo Airport and more. He is known throughout the city for being a transparent politician with his blog and use of social media.

“I’m sensing that people throughout the state, throughout the nation, people want to be engaged at the federal level and we haven’t figured out how to do that,” Curtis said. “I’ll be able to bring that to the Third District. We will have engagement. As a matter of fact, not only will we do town halls, we will reinvent town halls.”

Before Curtis even took the mic — and before the “typical John style” video introduced his entrance — Curtis’ wife Sue said a few words.

“John is not afraid to tackle hard things,” Sue Curtis said. “I know John will make Provo and Utah proud. Our family is behind him 100 percent because we know that if anybody can try to make a course correction at this critical time in American history, that John will be the right person to do that.”

Curtis has two and a half weeks to get 7,000 signatures from supporters. The Primary Election is on Aug. 15. Learn more about his campaign at johncurtis.org.

Utah-Tube: The Piano Guys harmonize with Sir Cliff Richard to echo a hopeful message Next post