Home Things To Do Music Summer for everyone: Central Valley

Summer for everyone: Central Valley 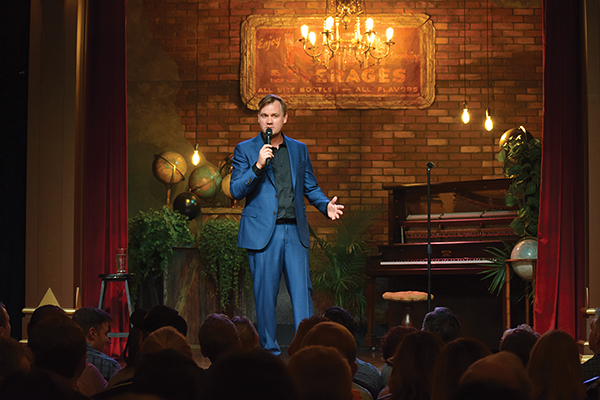 Those are the most dreaded words a parent can hear from non-pupilous children during the 99 days of summer. Put away the sigh and the eyeroll (we’re talking about yours) and check out 47 ideas divided geographically. No matter which part of the county you sip lemonade, you’ll have new ideas at your fingertips.

Make it funny, keep it clean.

Those are the rules at Dry Bar Comedy club in Provo. Opened by the owners of VidAngel, Dry Bar Comedy is the home for the hosting and filming of live, clean stand-up comedy specials. Utah Valley locals are just lucky enough to be part of the energetic audience with shows in downtown Provo on Fridays and Saturdays.

Two comedians with reputations for generally family-friendly content perform at each show and are flown in from all areas of the country. #nofilter

Downtown Provo has been an important economic, spiritual and governmental hub in the state of Utah since Brother Brigham was running the show. Today, the geographic center has changed in looks but not in importance. With the dedication of the LDS Church’s temple on the corner of University and Center came a refreshment of downtown drawing visitors from far and wide, thirsty and hungry, young and old, loud and soft.

υυWhat’s the point of living close to the beautiful Provo River if we don’t use it? From mild to wild, High Country Adventure provides a simple, safe, beautiful Provo Canyon trip. The adventure company also provides ziplining, fishing, floating, rafting and everything Provo River related.

Okay … maybe this county-wide event doesn’t take place exclusively in the central part of Utah Valley, but a large number of the homes featured in the Utah Valley Parade of Homes this year are in the hot areas of Orem and Vineyard.

Visitors can put on booties and walk through 30 homes, built by 28 of the area’s top builders in this annual tradition put on by the Utah Valley Home Builders Association. It’s the perfect place to find a dream home (and builder) or find the perfect decorating idea. 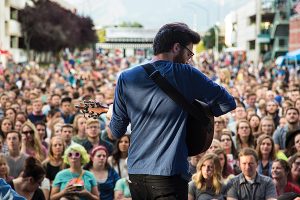 The Rooftop Concert Series rocks out in downtown Provo the first Friday of the month throughout the summer. (Photo by Justin Hackworth)

No Utah summer would be complete without slip-and-slide time at Seven Peaks Resort. The resort has been renovated and renewed for 2017, including private cabanas, park-wide lounge chair seating, extended weekend hours and merchandise available for purchase from the best beach brands. Stay all day and feed the family at Bistro 72, Woody’s Resort Grill or Roxberry.

LEGOLAND might be in southern California, but Utah Valley kids (and kids at heart) can work on their “master builder” skills at the Brick Slopes event held at the UCCU Center at UVU. BrickSlopes is an annual LEGO Fan Event organized by the SBC Corporation and features hundreds of LEGO displays created by more than 60 adults and teens from around the United States. The event has welcomed more than 25,000 visitors during the past three years and grows bigger each year.

Rock the Night Away

What happens when your Rooftop Concert Series gets so popular you can’t have it on a rooftop anymore? You keep the name and move it to the Nu Skin Plaza in downtown Provo (100 West and Center Street).

Provo is enjoying a renaissance, and the Rooftop Concert Series is Florence. It’s at the center of building the reputation of local musicians and downtown Provo as a place worthy of a precious Friday night.

When: First Friday of every month
Site: rooftopconcertseries.com 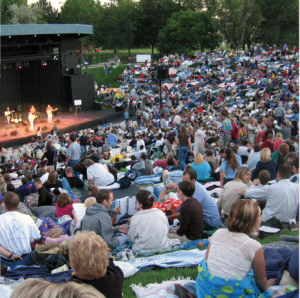 Featuring a demonstration garden highlighting water efficient plants, the Central Utah Gardens in Orem focuses on educating the public on responsible water use. After all, we live in a desert.

The Gardens hosts a variety of classes for adults and children. However, there are also “just for fun” events. For example, Aug. 14 features an “Evening with a Magician” with Jason Carling of the Utah Valley Magic Academy.

The Hill(sides) Are Alive with the Sound of Music

Since 1933, the SCERA in Orem has been offering an artistic flair to the Wasatch Front. And even with all the amenities and classes associated with the SCERA, the true summertime favorite is the SCERA Shell Outdoor Theatre. The 2017 outdoor season features a wide range of one-night events, including performances by Air Supply (May 29) and The Drifters (Aug. 28).

However, it is the musicals that highlight every summer. The 2017 lineup includes outdoor performances of Hairspray (June 9 to June 24), Seussical: The Musical (July 7 to July 22) and Brigadoon (Aug. 4 to Aug. 19).

So, pull up a chair — or bring a blanket — and enjoy entertainment under the stars.

Starting June 19, the boys of summer return to Orem and keep the summer filled with the smell of peanuts and Cracker Jacks. The Orem Owlz pitch a local opportunity to take the kids out to the ballgame and see the stars before they’re majors.

Plus, Brent Brown Ballpark includes one of the most beautiful backdrops in professional baseball.

Get on Center Street in Provo and head west. Keep going until you hit the shores of the largest freshwater lake in Utah — Utah Lake. Camp and then wake up to a wonderful day of boating, sailing or fishing — all within minutes of home.

The BYU Museum of Art is one of the most well-attended art museums in the Mountain West. Children may especially like “Playground.” British photographer James Mollison, inspired by his own childhood experience, took photographs of school playgrounds around the world. The exhibit is open now and runs through July 8.

Utah Lake has a variety of water activities.

The winter wonderland known as Sundance Mountain Resort remains spectacular through the summer, too. Trade in the slopes for theater (“Joseph and the Amazing Technicolor Dreamcoat” runs from July 20 to August 12), ziplining or a kids camp.

At the very least, enjoy a nice mountain drive minutes from home and enjoy lunch at the Foundry Grill. Ongoing

Little Big Town will be performing in our little big town at the Stadium of Fire in the culmination of America’s Freedom Festival, Provo’s premier summertime event. LaVell Edwards Stadium swells in a patriotic tribute every summer, and somehow the weather is always perfect.

Besides the concert and fireworks show at the stadium, the Freedom Festival also includes the Balloon Fest, Freedom Run and the Grand Parade.

Glass Is in Session

After 12 years in the making — and being featured on the cover of our November/December 2016 issue — the Roots of Knowledge exhibit is open to the public in the Ira A. and Mary Lou Fulton Library at UVU.

Bring the family and find the hidden artistic — and historical — treasures in the display.

Keep up with what events are happening in Utah Valley with our once a month “UV To Do” email. Sign up below!