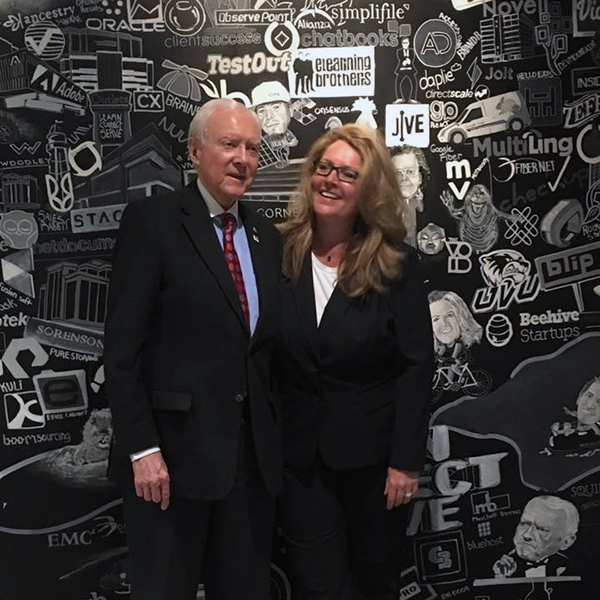 Senator Orrin Hatch and local tech entrepreneur Carine Clark have collaborated on issues and developed a friendship. Clark showed him the art wall depicting tech entrepreneurs inside the lobby at Silicone Slopes in Lehi. (Photo by Jeanette Bennett/UV360)

During the hourlong discussion held before lunch, the group discussed a myriad of topics from technology and its involvement in Utah’s growth to politics and transportation concerns. Here are seven insightful takeaways from Senator Hatch’s impromptu message and question-and-answer session.

“All senators and congress people get excited about high-tech issues, but not many understand what we need to do to support you.”

“I’ve been in the Oval Office with (President Donald) Trump for a total of about three hours discussing things. He takes my calls. He is sincere about wanting to move this country forward. Frankly, he’s bringing some changes to the United States government that are well-intended. If the other side would give him half a chance, he would bend over backwards for them. They are bitter about Hillary (Clinton) losing. I understand that. She was supposed to win. And they are bitter because it’s Trump — for a variety of reasons, and I understand that, too.”

3. Immigration and the lack of diversity in Utah

“We need to come up with an immigration system that works. We educate international students, and then we push them out of the country. We need to allow them to stay and work in businesses here, which will add to the diversity we seek. Canada comes down and advertises to these graduates to come work up there so they don’t get stuck with immigration problems. Our system seems stupid to me in many ways.”

Senator Orrin Hatch sat down with about 25 entrepreneurs at Silicon Slopes Thursday afternoon to answer questions about technology and politics. (Photo by Jeanette Bennett/UV360)

“Some are afraid to come to Utah because of the Mormons. But what they will find is that Mormons are entrepreneurial and open-market oriented. They are decent, honest people for the most part.”

“The federal government has all but screwed up health care. If Hillary had won, we would have gone straight to socialized medicine. As it is, we’re very close. Hillary was being pushed to the far left by Bernie — and I like Bernie. I get a kick out of him! But it’s a tremendous mess back there. In addition, we’ve got to come up with a better tax structure instead of this stupid system we have now.”

“You are the people upon whom we need to depend to save the country. Entrepreneurs cross party lines very well. You’re not all that political, which is a shame in a way. I need you to tell me how you can get more out of this old U.S. senator than you ever have before.”

Telling Kennedy's story right: 'Love, Kennedy' is as accurate as it gets in movie portrayals Next post