Home Things To Do Movies Telling Kennedy’s story right: ‘Love, Kennedy’ is as accurate as it gets in movie portrayals

Telling Kennedy’s story right: ‘Love, Kennedy’ is as accurate as it gets in movie portrayals 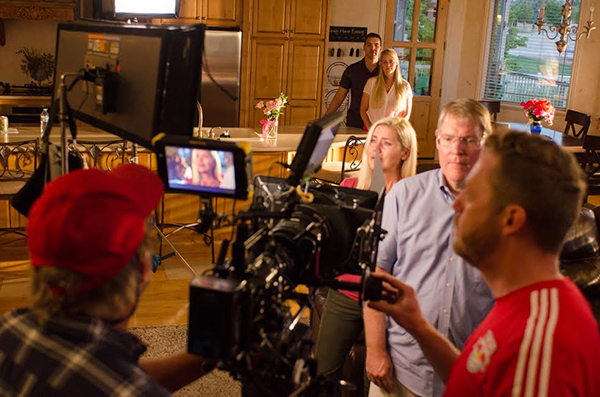 When  T.C. Christensen set out to direct a film about Kennedy Hansen, he hoped to make the story as authentic as possible.

Kennedy Hansen, from West Haven, Utah, died on May 30, 2014 at the age of 16 from Juvenile Batten Disease, a rare neurological disease. Throughout the last few years of her life, the disease had progressively worsened until she was blind, unable to speak and left with the mind of a child.

While Kennedy died three years ago, it isn’t her disease that makes her story live on. It was her optimistic attitude, unshakable faith and ability to change the lives around her that made Kennedy the hero of Christensen’s newest movie, “Love, Kennedy,” and the inspiration of nearly 80,000 Facebook followers.

In order to keep the film honest and reminiscent of the actual events, Christensen (“17 Miracles,” “Cokeville Miracle”) went back to Kennedy’s roots. The film used locations, props and actual people who lived through the events portrayed. 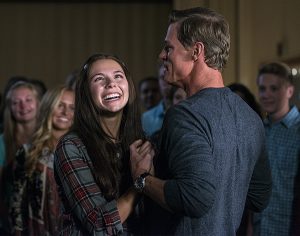 “All this authentic stuff that we try to do, it’s intangible,” Christensen said. “I can’t put a finger to it and say that shot is better. The way people feel as we are filming it and the respect would not have been the same if we had just found some anyday locations.”

For Kennedy’s parents, this movie is an opportunity to tell their daughter’s remarkable story and, in a way, relive some of those moments. Both Kennedy’s father, Jason Hansen, and director T.C. Christensen agree that the movie is around 95 percent accurate. Christensen added a few short scenes to make the story flow, but the Hansens had input all along the way — which they didn’t expect. Once the script was complete, Christensen dropped it off at the Hansen’s home and requested feedback to better align the movie with Kennedy’s life.

“He brought the script to our house and wanted our approval,” Heather Hansen, Kennedy’s mom, said. “He said, ‘Hey, what can we change? What do we need to do? We want it to be as accurate as possible.’ And then we loved it.”

From there, Christensen invited the Hansens to the auditions where Heather and Jason Hansen saw the two actors who would play them in the film and, ironically, shared the same given name.

“I think that’s Kennedy’s way of drawing a little bit of humor in there,” Heather Hansen said. “For me, when we were at casting and Heather Beers came in, immediately when I first saw her, I felt a connection. Then when I saw her read my part in the script for it, she just had such compassion and love. Afterwards when she was done, T.C. introduced us and she just gave me a hug and I felt like I knew her and I knew she was supposed to be in this part. For me, I hoped it was going to be Heather Beers.”

Beers got the part and actor Jasen Wade landed the role of Jason Hansen.

As filming began, the fake Hansen family walked the steps of the real Hansen family. Filming took place in the Hansen’s home, at Kennedy’s soccer fields and at her high school. The actors used the Hansen’s cars.

“Because it was so intimately involved that way with accuracy and details and what really happened, I was able to be on set every single day for the filming because it was right in my backyard,” Heather Hansen said. “It was right there. Jason was able to be there for a lot of it as well in between his work and meetings. … We felt really, really good about the film and its accuracy in telling a true story of what happened in our lives and in Kennedy’s life. We’re very pleased.”

Heather Hansen would even bring Tatum Chiniquy — the Orem, Utah native who plays Kennedy in the movie — pieces of Kennedy’s wardrobe.

“In every single scene I’m either wearing one of her necklaces, one of her hair barrettes or earrings,” Chiniquy said. “The Hansens are family. They are and forever will be. I love them with all my heart. I didn’t replace Kennedy, obviously, but I’m just an extension and I’m so grateful I can be. Being able to do this for them and for Kennedy, it’s an honor.”

“Kennedy’s story is not a tragedy — it’s a miracle.” — T.C. Christensen, director

Then there were the cast members who required no actor — they played themselves.

“They were there with Kennedy and they loved Kennedy, so I wouldn’t want to shut them out from the possibility of them being on the film,” Christensen said. “They created a real spirit on the set because they all knew Kennedy.”

And the family and cast believe Kennedy had a hand in bringing the film together because in life she wanted her story to be shared with as many people as possible.

“Kennedy’s story is not a tragedy — it’s a miracle,” Christensen said at the end of a special screening.

Editor’s Review: While “Love, Kennedy” is a tearjerker, it’s a movie that will make you cry in the best way. My faith was restored in humanity helping me know that, yes, there are still good people on this earth. The movie heavily portrays beliefs of members of The Church of Jesus Christ of Latter-day Saints. Word of advice — don’t forget your tissues.