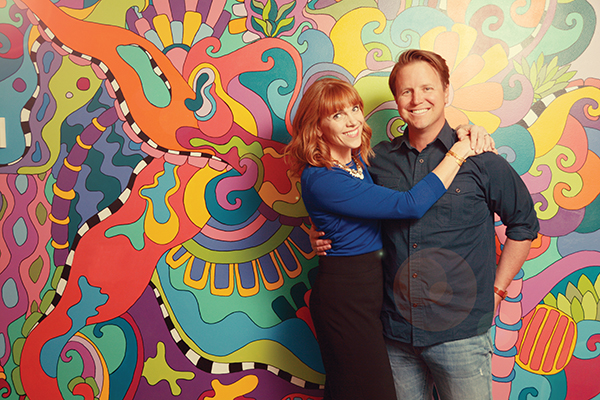 As the BusinessQ camera clicked, Vanessa and Nate Quigley debated about whether today was their 22nd or 23rd anniversary. “It’s our 23rd … Calvin (oldest son) is 22,” Vanessa explains ventriloquist-style to her husband as she smiles for the camera. The couple is raising seven children, a pregnant dog and their baby Chatbooks, which turns 3 this summer. “We run Chatbooks the way Nate and I run our family,” Vanessa says. “The culture has sprung out of our personalities.” But Vanessa has also learned that as much as she loves the business, it’s not her family. “You never cut anyone from a family — you never give up,” she says. “In a business, sometimes it’s better for everyone involved to kindly let someone go. When that happens, we offer a generous severance package and we create a story to launch them into their next experience.”

Chatbooks is the first business venture for Chatbooker-in-Chief Vanessa Quigley. Her role during her husband’s first companies was to support from the sidelines where she was learning leadership in a family setting.

When Nate and Vanessa decided to write a new storyline and grow a business that took pictures from tap-able to tangible, they combined their strengths and added an eighth child to their family: Provo-based Chatbooks, which is a subscription-based app that takes Instagram feeds (and other digital photo sources) and turns them into tangible books.

“In Nate’s previous companies, there wasn’t a conscious development or talk of culture,” Vanessa says. “He would leave before the kids got up and come home after they were in bed. That was not the life I had dreamed of or imagined, and I shed a lot of tears — which is maybe why I had so many babies right away.”

Now the Quigleys have hired 45 full-timers and 65 part-timers who earn their livelihood at Chatbooks, and together they are creating their startup culture with conscious intention. Aaron Skonnard, CEO of PluralSight (one of Utah’s tech darlings) was one of Chatbooks’ first customers and he sensed that the Quigleys would cross the culture chasm quickly. He suggested “The Advantage: Why Organizational Health Trumps Everything” by Patrick Lencioni.

“I didn’t yet have context for what I read, but it resonated with Nate and we talked about codifying our culture,” Vanessa says.

When their first small leadership team had been formed, they selected five Chatbooks values and developed a star motif to teach and perpetuate their handful of ideals: Grownup, Amazing, Ship, Optimistic, Kind.

“We want to do amazing work, but we also have to ship product — and sometimes those are at odds with each other,” Nate says. “We hire talented people who can deliver products in the cadence that we need. Some people are so caught up being amazing that they can’t flip the switch to push it out there.”

The optimistic corner of the star describes Nate and is essential in the chatty culture.

“We have to be optimistic to pitch to an investor, to sign a lease on a bigger space, to see competitors on the landscape and not be concerned,” he says. 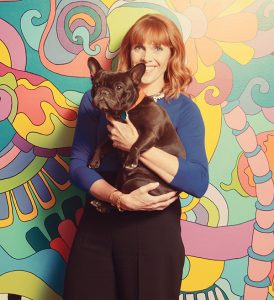 Vanessa brought Roxy to the photo shoot — the pregnant pet who is loved at home and at Chatbooks HQ. Roxy is also the name of an upcoming product offering that Chatbooks has up its startup sleeves. (Photo by Dave Blackhurst/UV Mag)

“Things aren’t always smooth sailing in a startup company,” Vanessa says. “We have things that don’t work. Things that fail. But if everyone is grownup and assumes responsibility for mistakes, we can kindly deal with the fall-out. We talk about all five values regularly.”

The five corners of the star play a big role in the hiring process and in the company’s ability to trust all employees with the flexibility that Vanessa herself needs to get her work done. The company looks for applicants who have all five attributes, but they have occasionally hired those who rate 4.5  — “unless we know that half-value will be a problem down the road,” Vanessa says.

The Quigleys reward their team with one of the most generous paternity/maternity benefits in the state. The company offers unlimited family leave, including three months medical for maternity leave, even for their part-timers.

“Our mom force is really the key to our success,” Vanessa says. “Our customer service is what sets us apart because we develop relationships with the customers and keep them informed of new Chatbooks options.”

When employees have babies, birthdays, Chataversaries, and other special occasions, they get rewarded with Chatbooks swag, which the company constantly updates. Chatbooks also celebrates each of the company’s birthdays (all three of them).

“When we hit our first birthday, Nate was adamant that we celebrate in style, so we went to Sundance where we had our wedding reception,” Vanessa says. “It was the perfect place to celebrate a major milestone.”

“Our mom force is really the key to our success. Our customer service is what sets us apart because we develop relationships with the customers and keep them informed of new Chatbooks options.” — Vanessa Quigley

The second birthday had a carnival theme, including a soda truck, activities and sticky gooey fun for employees, families and top customers. This month their third birthday will be celebrated with a Provo party themed Chatchella (after Coachella).

All of this culture club has been created since 2015 when BusinessQ named Chatbooks the No. 1 Startup to Watch as part of the annual UV50 issue and accompanying gala. The startup sold 1 million books within the first year and a half. As we go to print, Chatbooks is up for the Ernst & Young Entrepreneurs of the Year, and the Quigleys have become darlings at business events, panels and magazine articles (Exhibit A: you’re looking at it, kid).

“When we talk about what we’re planning for the future, Nate does a good job of keeping me excited instead of scared,” Vanessa says. “Our plans are huge. It’s crazy and amazing what has happened in three years.”

Chatbooks offers its employees a variety of chat-worthy benefits.

Chatbooks drinks to a healthy work week with green smoothies on Monday morning. “We have Green Me deliver, and it’s a tasty kickstart,” Vanessa says.

To balance out drinkable veggies, Chatbooks HQ includes a continuous “Table of Friendship” where treats pile up like paperbacks. Employees bring baked goods or leftover goodies from last night’s party. The staff knows co-founder Nate likes donuts, so sugary circles show up by the dozens. “It’s a place to share food and friendship.” Once a month, the company has Traeger Thursday where they grill flank steak, tri-tip, ribs and bratts for the lunchtime meal.

One of Nate’s mottos is “Keep It Weird.” He’s the king of nicknames, funny T-shirts and silly uniforms. He has trained the staff to keep their eye out for weirdness. The Chatbooks office overlooks the Provo River Trail, and people-watching is part of the job description. Nicknames for passers-by are kept on a whiteboard near the window, with regular walkers listed such as “Floppy Hat Guy.” Chatbooks purchased a floppy hat and people take turns wearing it around the office and hoping to spot the original floppy hat guy on the trail. “Sense of humor is really important,” Vanessa says. 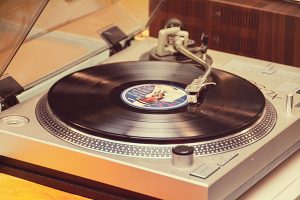 Just as vinyl records are the analog version of today’s Spotify and Pandora, Chatbooks is the analog version of social media and camera rolls. Symbolically, Chatbooks has an extensive record collection and chooses to put the needle on music that correlates to whatever company goal they are working on at the moment. (Photo by Dave Blackhurst/UV Mag)

Chatbooks has nearly outgrown its first-floor Provo Riverbottoms space and will be moving into the former Qualtrics building later this summer. To add fun, convenience and exercise to the Provo Chatbooks experience, the company has electric bikes for employees to hop on and go grab lunch at Kneaders or to run an errand. “It’s faster and more fun to travel by bike,” Nate says. “It’s part of our culture, although at the heart of it, culture is really about the values, the mission and the way we treat people. The bikes are just one small aspect of what the day-to-day experience includes.”

The talk of the town

The Chatbooks community includes in-office employees, an at-home mom force, and tech titans in Texas (say that three times fast). To stay connected, the company hosts a Town Hall every Thursday. The agenda includes lunch (Chick-Fil-a on the day BusinessQ was in “town.”). The chatter happens in-office with many joining electronically while the staff introduces employees, reviews new products, shares updated marketing plans and anything weird Nate wants to say. The meeting also includes a Q&A and a highlight of an employee who exemplifies the Chatbooks values. Nobody skips town!

Chatbooks culture is on full display by doing a headcount throughout the week. Mondays and Thursdays are in-office days when meetings and collaboration are the headliners. On Wednesday, it’s time to crank. Staff members work whenever and wherever they want, which means the office is quiet and doorway chats are nonexistent. “We expect employees to get work done that day,” Vanessa says. “I usually lock myself in my bedroom office. Some of our employees meet in a tree fort in Salt Lake. Crank Wednesday makes for a more productive Thursday when everyone is back together.”

Written in the stars

When Chatbooks was still a baby, the eight-person leadership team went to the Quigleys’ home for a retreat. Everyone was asked to think of their favorite person to work with at Chatbooks. The group filled a whiteboard with qualities of the all-stars and then distilled the ideas down to five distinct values, which the company put in the framework of a star. At the top of the star is “grownup.” Vanessa says, “I’ve lived my adult life with children, and if I’m going to come here and sacrifice the free time I was going to have, I want to be working with grownups who are responsible and follow through.”

Chatbooks is about to celebrate its third birthday, and this toddler is flying in all of their out-of-town employees for Chatchella (a spin on Coachella). “A lot of our remote force hasn’t met everyone, and we always have hugs and even tears when we meet,” Vanessa says. “There is something powerful about building something together. At one point, Instagram disconnected us from our customers. We all had to help deal with that. Our backend guy was at Disney World and we had to rally to overcome obstacles. It binds us together, and we use our company birthday to celebrate the unity.”