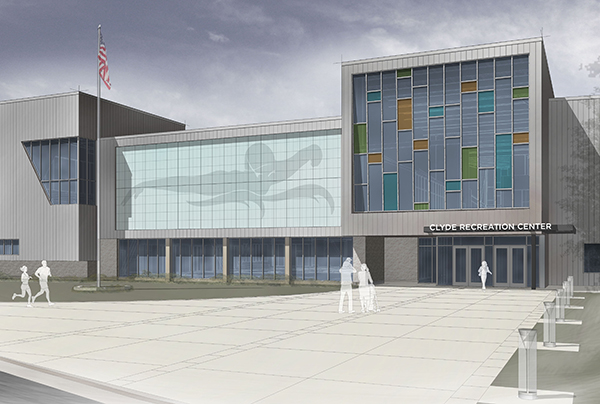 “We are honored to continue the Clyde mission of ‘Building a Better Community,’ and feel confident that this donation will leave a lasting impact in our community for many years,” said Wilford Clyde, Chairman and CEO of Clyde Companies, in a press release. Wilford Clyde is also the mayor of Springville.

Because of the generous donation, the Springville City Council voted to officially name the new city facility the Clyde Recreation Center. The 65,000-square-feet building will include indoor pools and an indoor track. The new aquatic center, which is currently under construction, will be behind the Smith’s Marketplace and Meadow Brook Elementary in west Springville between 600 and 700 South.

The city expects to open the facility at the end of 2017.

“We’re doing everything we can to get it ready for the end of the year,” said Rod Oldroyd, Springville director of administrative services.

The donation from Clyde Companies will not pay off debts, but instead it provides the funding for additional amenities, such as an improved scoreboard and an outdoor water feature.

“We’re doing everything we can to get it ready for the end of the year.” — Rod Oldroyd, Springville director of administrative services

“The city of Springville is so pleased to receive this generous donation from Clyde Companies,” said Troy Fitzgerald, Springville City administrator. “The additions to the Clyde Recreation Center would not have been possible without the donation and it will make the facility even better.”

Facilities in the Clyde Recreation Center will include:

“The pools will be a plus for the entire community,” Oldroyd said.

The Clyde Recreation Center will service the swim teams for Springville High School, schools in the Nebo School District and city swim teams year round. The center will also host swim meets.

Those swim teams have been using Springville’s current indoor pool, which is about 40 years old. It has been a challenge to keep running, “but we’ve done it,” Oldroyd said.

Prices for residents to use the aquatic center are posted on the Springville City website. A daily pass will be $5 for adults and $3.50 for children and seniors. They will provide discounted rates for family as well as monthly and annual passes. Higher rates will apply for non-residents.

“This donation by Clyde Companies is a way for our business to give back to the city of Springville and the community that has supported our businesses since my grandfather, W.W. Clyde, started here in Springville over 90 years ago,” Clyde said.

November 2016 the city council voted and approved the aquatic center project. Construction began at the end of year in 2016.