Summer getaway: Tuacahn, an oasis of entertainment in southern Utah 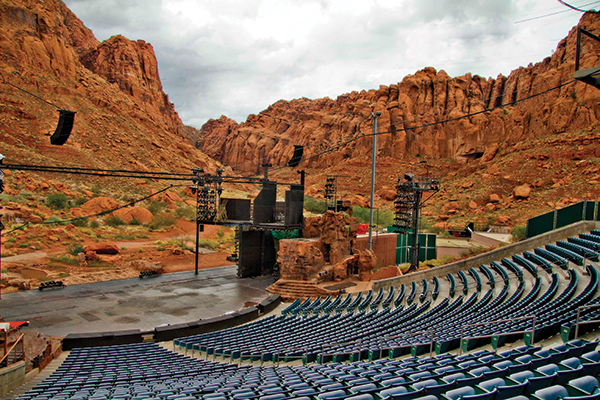 St. George cools down at night, making a show at the Tuacahn Ampitheateer a comfortable rest from Dixie activities life hiking and golf.

Looking for a place to take the family this summer that’s not too far away, is reasonably priced, offers top-flight theater performances and creates lasting memories?

Take a look at Tuacahn.

The Tuacahn Center for the Arts is located in Ivins, Utah, near Snow Canyon State Park. It’s an oasis of entertainment in the southern Utah desert.

The 42,000-square foot Tuacahn facility, which opened in 1995, includes a 1,920-seat outdoor amphitheater amid the beautiful red rocks.

Artistic director Scott Anderson in his 13th year with Tuacahn and he’s excited about the lineup of Broadway-quality shows.

“We spent a long time casting in New York, Los Angeles, Utah and Nevada. It’s great,” Anderson said. “We get Broadway veterans and Tony Award winners that we’ve had on that stage. We have some really talented regional performers. It’s really grown in stature. We’ve had some great involvement from Disney and now we’re working DreamWorks, which just was purchased by NBC Universal. There are some fun things happening here due to the great people who work here.”

“Shrek: The Musical,” based on the series of “Shrek” movies, is popular with children and adults, said Anderson, who directs the musical.

“Mamma Mia,” which features plenty of music from the 1970s pop group ABBA, is geared toward an older audience due to the mature content of the show.

And each year, Tuacahn’s popularity seems to get bigger.

Visitors to Tuacahn come from all over.

“Thirty percent come from southern Utah, which is pretty amazing,” Anderson said. “We have a larger percent from northern Utah. We also get big crowds from the Las Vegas area, as well as southern California, Arizona and Idaho. We have 10 percent from all over the world and all over the United States. People will come to the National Parks and canyons and everything else.”

Tuacahn Amphitheatre is located on 1100 N. Tuacahn Drive in Ivins. Tickets prices are anywhere from $29–$89 apiece.