5 lessons prophets learned from their fathers

“Follow the Prophet” is a popular song from the The Church of Jesus Christ of Latter-day Saints Children’s Songbook. It sings of biblical prophets with nine verses and one catchy chorus. Members of the LDS faith respect and revere the leaders of their church.

Members also respect and revere their fathers, as fatherhood plays a crucial role in the church.

In church addresses, LDS prophets have reflected on lessons learned from their fathers and tried to follow in their father’s footsteps. Often they recall these stories tenderly and with great emotion.

In the spirit of Father’s Day, here are some stories shared by prophets about the fathers they followed. 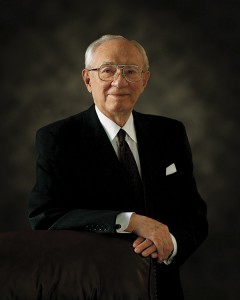 Members of the LDS Church cherish this story about President Gordon B. Hinckley’s father, especially by those serving or preparing to serve missions.

While President Hinckley served a mission in England as a young man, he became discouraged. He wrote home to his father, expressing his concerns. In July of 1989, the Ensign published an adaptation of the talk President Hinckley made at BYU, recounting this mission experience titled, “Taking the Gospel to Britain: A Declaration of Vision, Faith, Courage, and Truth.”

President Hinckley’s father responded to the letter of discouragement. “He wrote a very short letter to me which said, ‘Dear Gordon, I have your recent letter. I have only one suggestion: forget yourself and go to work,'” President Hinckley said. “Earlier that morning in our scripture class my companion and I had read these words of the Lord: ‘Whosoever will save his life shall lose it; but whosoever shall lose his life for my sake and the gospel’s, the same shall save it.’ (Mark 8:35.) Those words of the Master, followed by my father’s letter with his counsel to forget myself and go to work, went into my very being.”

In April 2016, Elder D. Todd Christofferson gave a talk titled, “Fathers.” In his talk, he reflected on his father’s example and the respect he developed at a young age.

“I myself was blessed with an exemplary father,” Elder Christofferson said. “I recall that when I was a boy of about 12, my father became a candidate for the city council in our rather small community. He did not mount an extensive election campaign — all I remember was that Dad had my brothers and me distribute copies of a flyer door to door, urging people to vote for Paul Christofferson. There were a number of adults that I handed a flyer to who remarked that Paul was a good and honest man and that they would have no problem voting for him. My young boy heart swelled with pride in my father. It gave me confidence and a desire to follow in his footsteps. He was not perfect — no one is — but he was upright and good and an aspirational example for a son.” 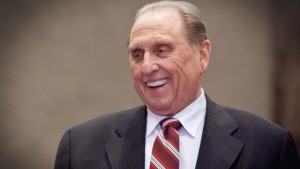 President Thomas S. Monson is well known for his positive attitude and willingness to serve other people at any time. President Monson expressed how his father similarly would care for others in need in a talk titled “An Attitude of Graditude” given at the April 1992 general conference.

“As I reflect on my own father, I remember he yielded his minuscule discretionary time to caring for a crippled uncle, aged aunts, and his family,” President Monson said. “He served in the ward Sunday School presidency, always preferring to work with the children. He, like the Master, loved children. I never heard from his lips one word of criticism of another. He personified in his life the work ethic. I join you in an expression of gratitude for our fathers.” 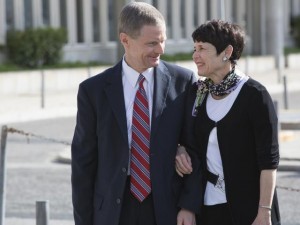 Elder David A. Bednar honored his father in a general conference talk in April 2012 titled “The Powers of Heaven” by recounting a story that led to his father’s baptism.

Elder Bednar’s father responded by asking about LDS priesthood holders fulfilling their church callings and responsibilities and what it means to hold the priesthood.

“I have never forgotten the lessons about priesthood authority and power I learned from my father, a good man not of our faith, who expected more from men who claimed to bear God’s priesthood,” Elder Bednar said.

Elder Bednar’s father was later baptized a member of the LDS church. 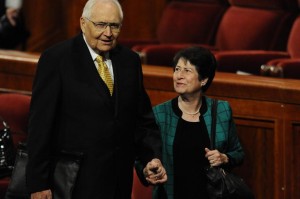 In a general conference address in April 2014 titled “Obedience through Our Faithfulness,” Elder L. Tom Perry shared a story of his grandfather.

Elder Perry described the treasured relationship he shared with his grandfather. “One day I asked my grandfather how I would know if I was always doing the right thing, given that life presents so many choices,” Elder Perry said. “As my grandfather usually did, he answered me with an experience from farm life.”

Elder Perry’s grandfather continued to share a principle about breaking in a team of horses and related it to how people can receive revelation from God.

“So the lesson my grandfather taught me was always to be ready to receive the gentle tug of the Spirit,” Elder Perry said. “He taught me that I would always receive such a prompting if I ever veered off course. And I would never be guilty of more serious wrongdoings if I allowed the Spirit to guide me in my decisions.”

Retracing the Restoration: A guide to visiting Restoration sites Next post