Home LDS Being LDS Retracing the Restoration: A guide to visiting Restoration sites 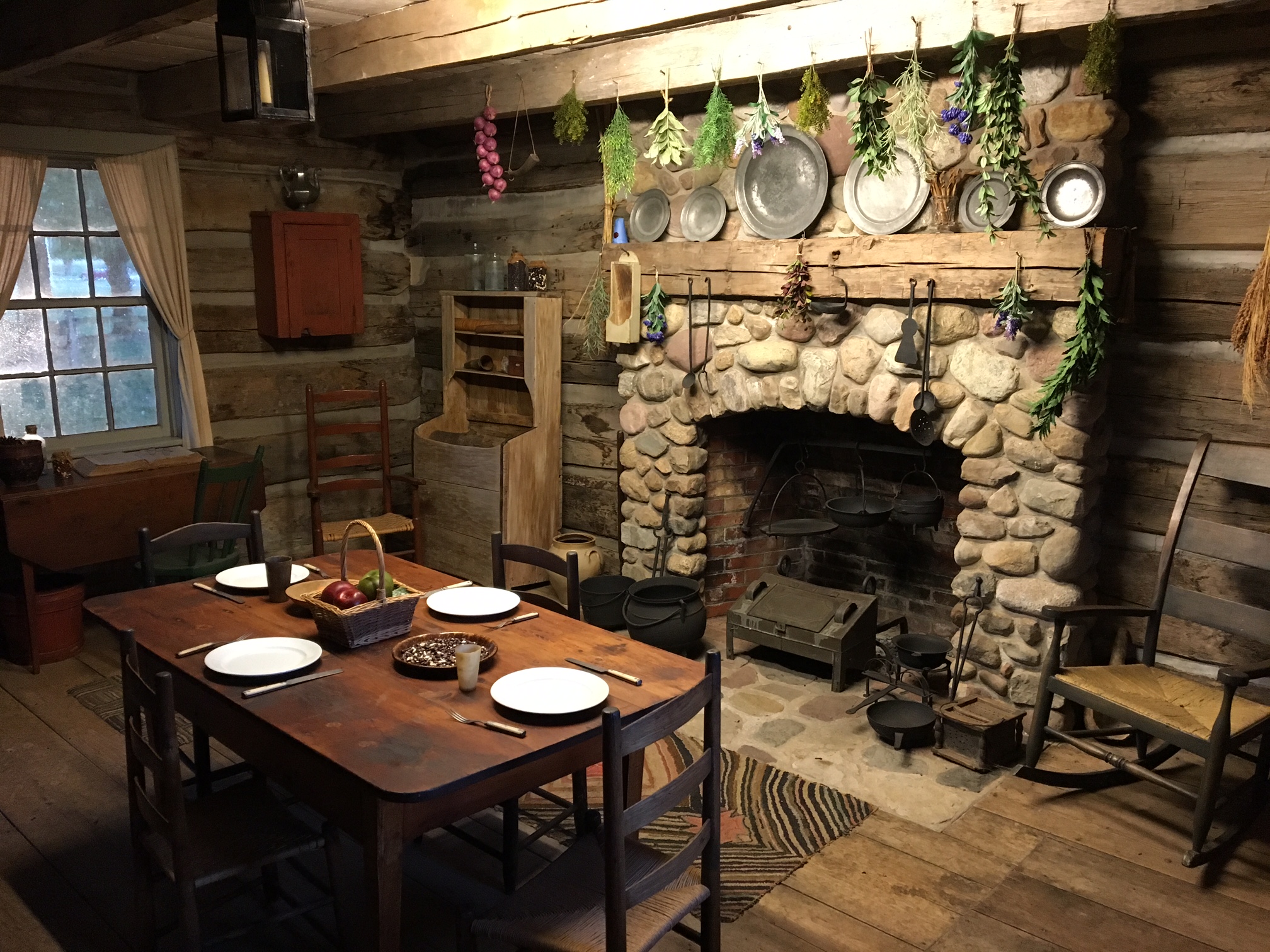 The Church of Jesus Christ of Latter-day Saints was founded in the Whitmer family’s small log cabin in Fayetteville, New York, in 1830. It’s unlikely its six founding members could have envisioned church membership growing to nearly 16 million. (Photo by Christa Woodall)

Ever dreamed of meeting Joseph Smith, Brigham Young, and other early Latter-day Saints? Although they passed away 100-plus years ago, their spirits are still alive and well at the historical sites of The Church of Jesus Christ of Latter-day Saints. Senior and sister missionaries bring history alive throughout the Northeast and Midwest, sharing the stories of what happened in pivotal Church history sites and testifying of the truth of the gospel.

In a three-part series, we’ll take a look at Latter-day historical sites scattered across the United States, from the household-name heavy-hitters like Palmyra and Nauvoo to some lesser-known hidden gems. There’s no better place to start such a series than in the LDS Church’s first homes.

Palmyra: Birthplace of the Restoration 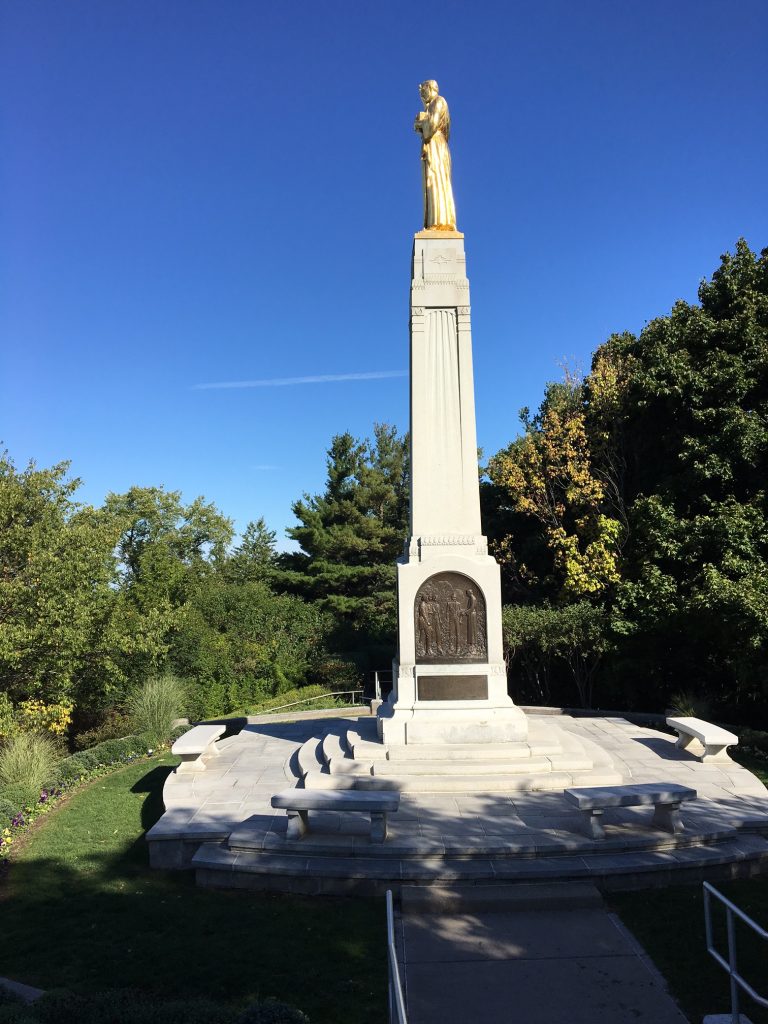 Unlike his typical temple-topping trumpeter pose, the Angel Moroni statue on the Hill Cumorah features the ancient Book of Mormon holding the gold plates he buried in life and revealed to Joseph Smith in angelic visitation. (Photo by Christa Woodall)

The First Vision. Moroni’s appearances to Joseph Smith. The Book of Mormon’s first publication. So many pivotal moments of the Restoration happened in Palmyra, an obscure, small village in upstate New York.

Start your visit with a missionary-led tour of the Smith homes, including the replica log cabin where Moroni appeared to Joseph Smith and the historic frame home built by Joseph Smith’s oldest brother, Alvin. After the tour, visitors are invited to stroll privately through the Sacred Grove, woodland adjacent to the Smith farm where God the Father and Jesus Christ appeared to Joseph.

The Book of Mormon Publication Site

It was here, on Palmyra’s Main Street, that E. B. Grandin printed the first 5,000 copies of The Book of Mormon for Joseph Smith. The publication building features missionary-guided tours an interactive look at the labor-intensive printing process from Joseph Smith’s day. Visitors can purchase replica copies of the first edition of Book of Mormon at the gift shop next door.

The pyramid-shaped hill rises above the flat terrain south of Palmyra. At its base is a visitor center with exhibits on Book of Mormon history. Visitors can trek the steep hill to an Angel Moroni-topped monument dedicated in 1935 by President Heber J. Grant. The monument itself is deeply symbolic, with bronzed depictions of the Book of Mormon witnesses and stonework ornamentation representing the administrative pattern of the LDS Church.

The Whitmer family was integral to the early Church’s success, and it was in their home 22 miles from Palmyra that Joseph Smith and five others formally organized the restored Church of Jesus Christ of Latter-day Saints. Several Whitmers were among the Book of Mormon’s witnesses, and Mother Whitmer holds the distinction as one of the only women to have seen the gold plates. 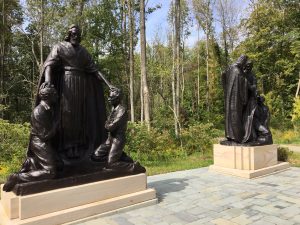 Statues depict Joseph Smith and Oliver Cowdery receiving both the Aaronic and Melchizedek priesthoods by heavenly visitation at the site where both restorations happened in Pennsylvania. (Photo by Christa Woodall)

The Priesthood Restoration Site is one of the LDS Church’s newest historic sites. It was here, while Joseph Smith and his wife, Emma, lived with her parents on a farm near the New York-Pennsylvania line, that the Aaronic and Melchizedek priesthoods were restored. This time was also filled with milestone in the young prophet’s life, including the birth and death of his firstborn child and much of the work translating the Book of Mormon. 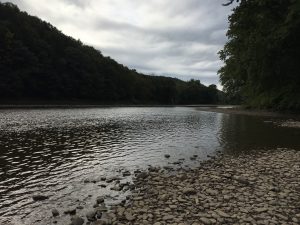 It was near this spot that Joseph Smith and Oliver Cowdery baptized one another after the Aaronic Priesthood was restored to them in May 1829. (Photo by Christa Woodall)

Much like Palmyra, a visit to the Priesthood Restoration Site begins at the visitor center. The site’s newness — it was only dedicated in September 2015 — provides interactive, technology-driven exhibits featuring early Latter-day Saints whose lives were changed by the revelations and restorations that happened here.

A missionary-led tour walks visitors through the other sites clustered at the site, including Emma Smith’s reconstructed childhood home, the small home nearby in which Joseph and Emma lived, and the cemetery in which their infant child is buried along with Emma’s relatives. West of the visitor center, paths take visitors at their own pace through the woods where John the Baptist conferred the Aaronic Priesthood to Joseph Smith and Oliver Cowdery in May 1829.

A short drive from the visitor center, a small path leads to the banks of the river behind Joseph and Emma’s home. Small markers along the path tell of the site’s significance. It was here, on May 15, 1829, that Joseph Smith and Oliver Cowdery baptized one another — the first baptisms of this dispensation. 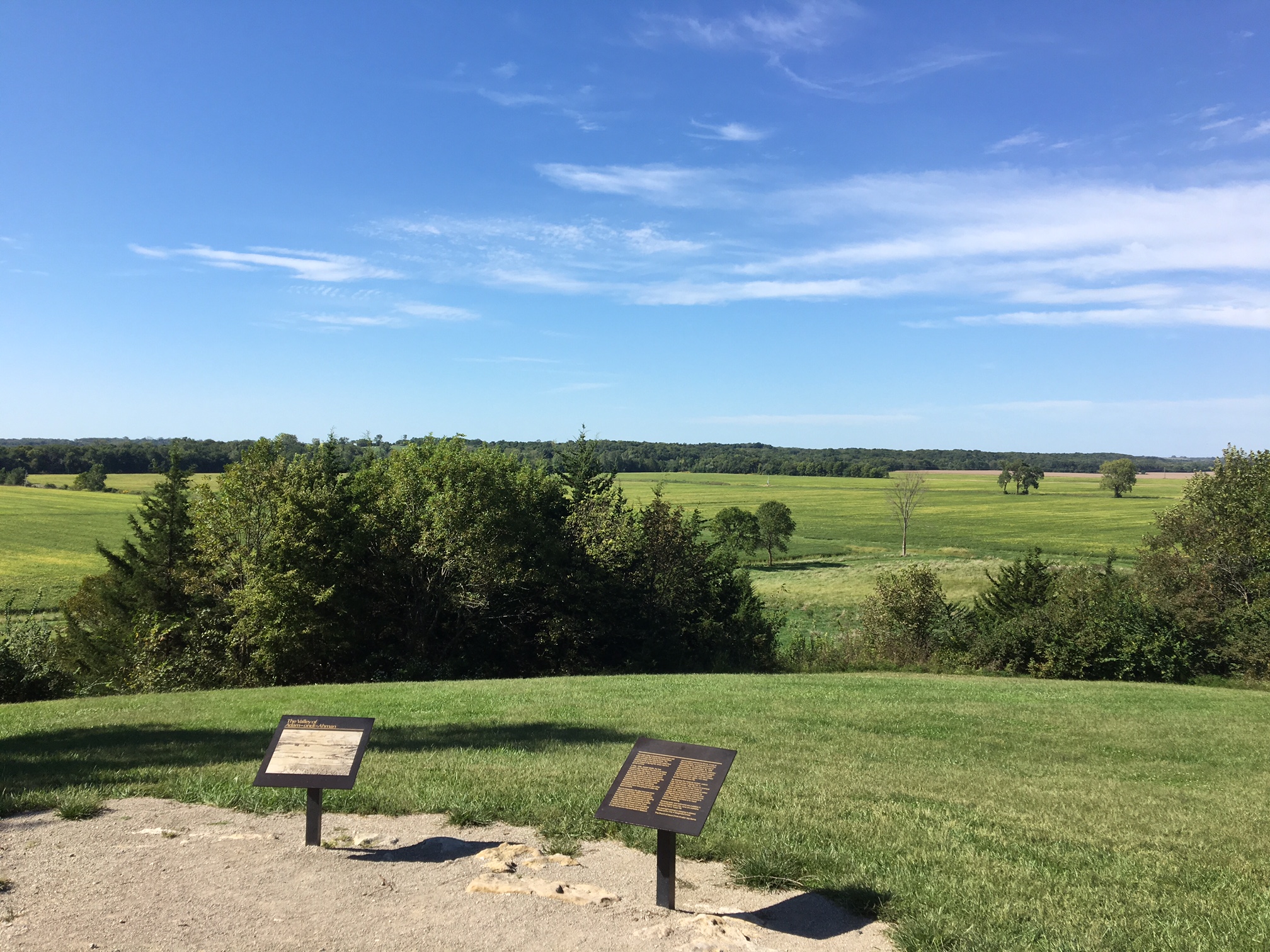 Once home to a bustling Latter-day Saint settlement, the valley of Adam-ondi-Ahman sits quietly today, with sections in use as farmland. (Photo by Christa Woodall)

Facing persecution in New York and Kirtland, Ohio, the early Latter-day Saints were instructed to move to Zion—revealed to be in Independence, Missouri — in 1831. The eight years the Saints spent in Missouri were filled with violence and harassment, but historical sites scattered throughout northwestern Missouri stand as testaments to their faithfulness in seeking to fulfill God’s will against all odds.

Independence, Missouri, is filled with traces of Latter-day Saint history. Located near the temple site—which was dedicated in August 1831 but never built upon — are churches and temples for several churches rooted in the Mormon movement. The LDS Church Visitor Center offers videos and exhibits detailing the Saints’ time spent in Missouri. Missionaries can provide guidance for seeing sites nearby.

Across the street is the Community of Christ temple, which offers tours of its nautilus-inspired building. The Community of Christ was founded by Joseph Smith’s son, and as such, the temple’s museum has wonderful Smith-family heirlooms and church-related artifacts that are worth the visit.

While driving around the area, take note of how many buildings have variations of “Church of Christ” on them — these are home to several denominations who broke off at some point from the LDS Church or Community of Christ.

This prison cell which held Joseph Smith, his brother Hyrum, and others for five months is often called a temple prison because of the reassuring revelations and spiritual growth received therein. The LDS Church built a cut-away, diorama-style replica of the prison on its original site, encased within the visitor center. An audio-visual presentation depicts the prisoners’ experiences in a unique manner that brings the history to life.

Far West was, at one time, the largest Latter-day Saint settlement in Missouri. Today all that remains of that era are the foundation stones for a temple, encased alongside placards explaining the site’s historical significance. An LDS Church-maintained site stands as a monument to early Saints’ faithfulness despite persecution. In 2012 the Church purchased nearby burial grounds wherein an estimated 200 Latter-day Saints were buried, many dying at the hand of mob violence; however, the grounds were an open field of weeds as of last fall.

Nearly 100 miles north of Independence is the a large, open valley where prophesy says Adam, the first man, and his righteous posterity will meet with Jesus Christ upon the Savior’s return. The peaceful, pastoral property features plaques and trails (as well as restrooms) maintained by the LDS Church. Sections of the land are leased to locals for farming, and within the woods still lie remnants from the Mormon settlement that once thrived.

Best Company to Work For: BambooHR believes 'work life should support the personal life' Next post