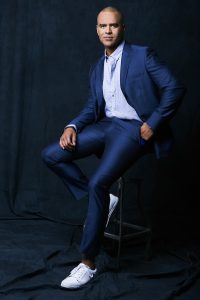 Broadway star Christopher Jackson will perform with the Mormon Tabernacle Choir and Orchestra at Temple Square as part of the Pioneer Day celebration on Temple Square.

Jackson — who won a Grammy Award for his performance as George Washington in the Broadway play “Hamilton” — is the guest artist at the “Music for a Summer Evening” performances on July 14 and 15 at the Conference Center in Salt Lake.

“We are delighted to have Christopher Jackson join us for this year’s concerts,” said Mormon Tabernacle Choir president Ron Jarrett in a press release. “He is a multitalented artist with an amazing stage presence. Combined with the choir and orchestra, he will create a magical experience for audiences.”

Jackson’s other credits include the singing voice of Chief Tui in “Moana,” roles in the Broadway plays “The Lion King,” “Memphis,” “The Bronx Bombers” and “In the Heights,” and an Emmy composing for “Sesame Street.”

The “Music for a Summer Evening” concerts are a part of the Salt Lake City Pioneer Day celebrations.

“The choir will capture the courage of these early settlers by singing pioneer hymns as they unite listeners in harmonious appreciation for their sacrifice,” Jarrett said in a press release.

The concerts start at 8 p.m. on July 14 and 15. Tickets come at no charge, but are required for entry. Tickets are available via phone, online or at the Conference Center ticket office starting June 20.

Patrons without tickets can wait in the standby line outside the Conference Center for last-minute seating starting at 6:30 p.m. the day of the concert.

Children must be eight or older to attend.

MormonTabernacleChoir.org will live-stream the July 15 concert at 8 p.m. MDT. Mormon Channel will also stream the event via YouTube. It will provide translations of the event in Spanish, German, French and Portuguese.

After the concert, the MormonTabernacleChoir.org will upload a video of the performance.