BYU aims to craft a balanced offense in 2017 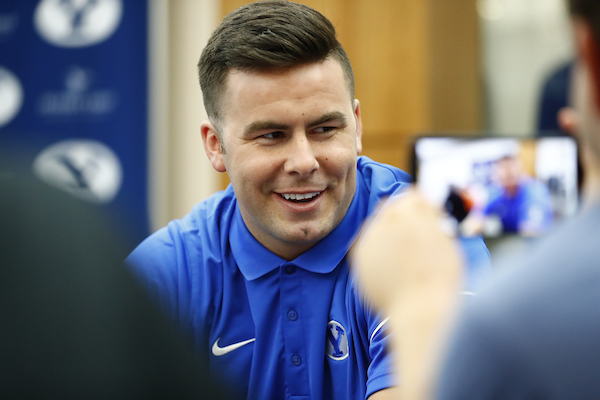 Classic BYU football starts and ends with throwing the ball and lighting up the scoreboard. The Cougar offense took on a much different form in Kalani Sitake’s debut season.

BYU ran opponents into the ground most of the time behind all-time leading rusher Jamaal Williams and Taysom Hill. Now that Williams and Hill have graduated, the expectation is to see a return of a more wide-open aerial attack behind Tanner Mangum.

A high-flying and high-scoring offense is BYU’s legacy. Offensive coordinator Ty Detmer added to it as a Heisman Trophy winning quarterback. Detmer, however, isn’t about to swing the pendulum from a steady diet of running to a binge of pass plays.

“You hear it from the fans. They want to see the ball in the air,” Detmer told reporters at BYU’s annual football media day on Friday. “My job is to do what’s asked of us to win the game. If that’s keep the defense off the field and 12 to 15 play drives and work the clock – if that’s what it takes to win the game – that’s what we’ll do offensively.”

“My job is to do what’s asked of us to win the game. If that’s keep the defense off the field and 12 to 15 play drives and work the clock … that’s what we’ll do offensively.” — Ty Detmer, BYU offensive coordinator

BYU is striving for offensive balance entering the 2017 season. The Cougars want to lean on a healthy running game whenever they can and attack with a more potent passing game.

Mangum showed plenty of promise for getting it done through the air during his freshman season. He threw for 3,377 yards and 23 touchdowns while completing 59.9 percent of his passes in 2015.

The junior expects even better things in 2017. He has made strides in his grasp of the BYU offense. Mangum is able to put plays and formations together on his own without needing Detmer to draw up scripts for him. His confidence is soaring as he graduates from Hill’s understudy to true team leader.

“There’s pressure, but I like it,” Mangum said. “It’s a good pressure. It’s motivating. It’s exciting. It’s kind of feeling like everything is coming together as an offense. We’re picking things up. It’s year two now with the coaches. I feel good. From a leadership standpoint, I’m feeling confident. I’m really excited about the guys we have playing for us. I feel like it’s not all on me.”

Mangum will have plenty of targets to work with in 2017. BYU has greater depth and talent at tight end after moving Moroni Laulu-Pututau from receiver and adding Matt Bushman into the mix alongside returners Tanner Balderree and Hunter Marshall. Laulu-Pututau is the frontrunner to earn a starting role after totaling 277 yards and two touchdowns on 27 catches last season.

Jonah Trinnaman and Aleva Hifo headline the returning wide receivers while Micah Simon and Talon Shumway appear poised to carve out bigger roles as pass catchers. Trinnaman is the top returning receiver of the group, with 321 yards and a touchdown on 28 catches in 2016.

Mangum is prepared to make the most of their talents. Sitake discerns a new level of maturity and confidence from the junior gained from watching and learning as Hill’s understudy a year ago.

“There’s pressure, but I like it.” — Tanner Mangum, BYU quarterback

“He’s going to benefit from having the headsets on,” Sitake said. “He also knows what Ty (Detmer) expects during the game. For him, he’s been ready for this moment compared to his freshman year when he was kind of thrust into it right away, kind of unexpectedly.”

No Williams or Hill means BYU’s running game will look different — at least in the beginning — when the 2017 season starts. The Cougars have several quality backs, but not a ton of experience with the group.

That means a running back by committee approach. Squally Canada figures to get the first shot at evolving into a primary ball carrier. Canada totaled 315 yards and two touchdowns on 74 carries as Williams’ primary backup a season ago.

The junior is determined to make a much bigger impact this time around. He has boosted his weight from 192 pounds to 205 pounds during the off-season with an eventual goal of 208 pounds and 8 percent body fat by the season opener against Portland State.

Canada has made similar strides with his running style. His vision has improved. He’s making better pre-snap reads and following blocks rather than simply relying on instinct to find the hole and burst through it.

“I’m approaching the season like this is my year,” Canada said. “I know they haven’t given out a spot yet and I know they’re saying it’s running back by committee. But my goal is to go in and make it my best year so far. Every year of football in my life that I’ve played, I always get better as I get used to being in the program.”

Canada’s main competition will come from Ula Tolutau, K.J. Hall, Riley Burt and former receiver Trey Dye. Hall averaged 5.3 yards per carry as a freshman, posting 101 rushing yards against Massachusetts and 127 all-purpose yards against Southern Utah. Tolutau rushed for 2,465 yards and 31 touchdowns as a senior at East High in 2013.

Migrating with the Mormons: A guide to visiting Kirtland, Nauvoo, and Winter Quarters Next post