Home LDS Being LDS Migrating with the Mormons: A guide to visiting Kirtland, Nauvoo, and Winter Quarters

Migrating with the Mormons: A guide to visiting Kirtland, Nauvoo, and Winter Quarters 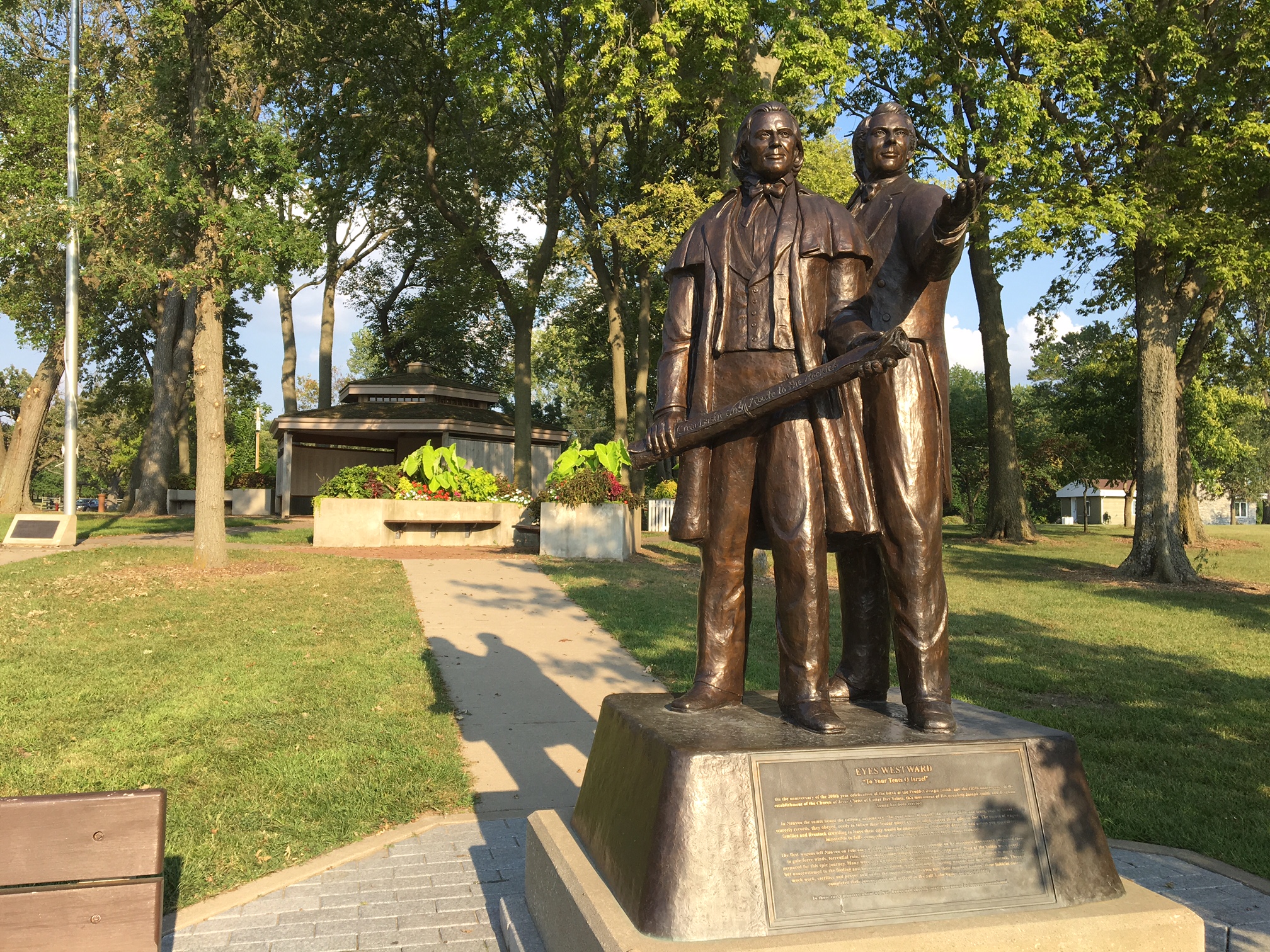 A statue of Brigham Young, left, and Joseph Smith looking westward to the future marks the end of the Trail of Hope along Nauvoo’s Parley Street. It was from here that thousands of Latter-day Saints crossed the Mississippi River during their exodus across Iowa to Winter Quarters and beyond. (Photo by Christa Woodall)

The heartwarming aroma of freshly baked bread. The clanging of hot metal against an anvil. The clip-clop of horse hooves pulling a loaded wagon. Visiting Nauvoo, Illinois and Kirtland, Ohio transports you to life in the 1830s and 1840s, with historical sites large and small preserved in a beautiful, hands-on way. Step back in time and see how the Saints lived before their pioneer trek to the Salt Lake Valley. 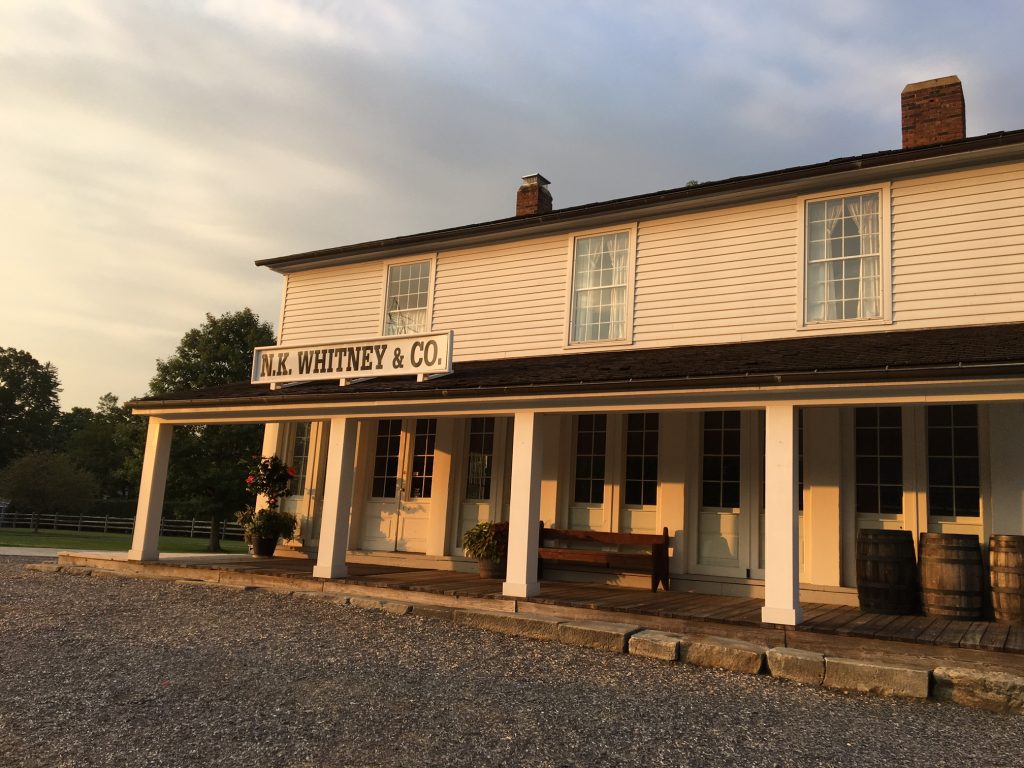 The Newel K. Whitney Store doubled as LDS Church headquarters during the Kirtland era. It was here that the School of the Prophets initially met—which also led to receiving the Word of Wisdom, among other revelations. (Photo by Christa Woodall)

The small northern Ohio village of Kirtland served as LDS Church headquarters — and home to about 2,000 Saints — from 1831 until 1838. Its historic sites are a little spread out but worth the drives to understand this pivotal era in Latter-day Saint history.

The Visitors’ Center offers a great starting place, with missionary-led tours through the historic sites. A walk through the Newel K. Whitney Store provides a glimpse at both temporal and spiritual life in Kirtland, with the shop’s upstairs serving as church headquarters and home to the School of the Prophets. Learn how the Saints turned trees into lumber for the temple at the sawmill on the Chagrin River, and see how the refiner’s fire provided Saints with revenue to fund Church activity at the ashery. The reconstructed John Johnson Inn acts as a second visitor center with several exhibits about life in Kirtland, including databases wherein visitors can search for their ancestors’ involvement there. 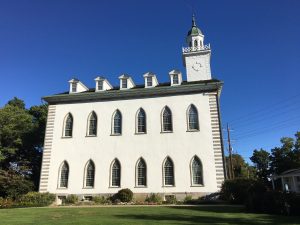 Although now covered in white stucco, the Kirtland Temple once glittered in the sunlight from shards of broken glass and crockery in its cement. (Photo by Christa Woodall)

When the Kirtland Temple was dedicated in 1836, it served a different purpose than LDS temples today (those ordinances didn’t come until Nauvoo). Instead, the Kirtland Temple was a house of worship for the Latter-day Saints, and its unique structure has been beautifully preserved by the Community of Christ. For a small fee, visitors can take a tour to see — and to sit — where the early Saints learned from Joseph Smith and other leaders.

“Father Morley,” as the Saints affectionately called him, was a 26-year-old bachelor who bought 130 acres of Ohio farmland in 1812. Decades later he, and his farm, was among the large group of Kirtland converts one mile from Historic Kirtland, became a gathering place for the Saints. A 45-minute tour shares Morley’s story, including the sacrifices he made in following his faith.

Father Johnson opened his home to Joseph and Emma Smith, and its restored beauty speaks to Johnson’s prosperity and to the site’s importance in Church history. It was here, 25 miles southeast of Kirtland, that Joseph received a number of powerful revelations, and that power is palpable. The site also holds the pain of loss and persecution. It was here that a mob dragged Joseph and Sidney Rigdon from their beds, beating and then tarring and feathering the men. Exposure from that night resulted in the death of Joseph’s infant son. 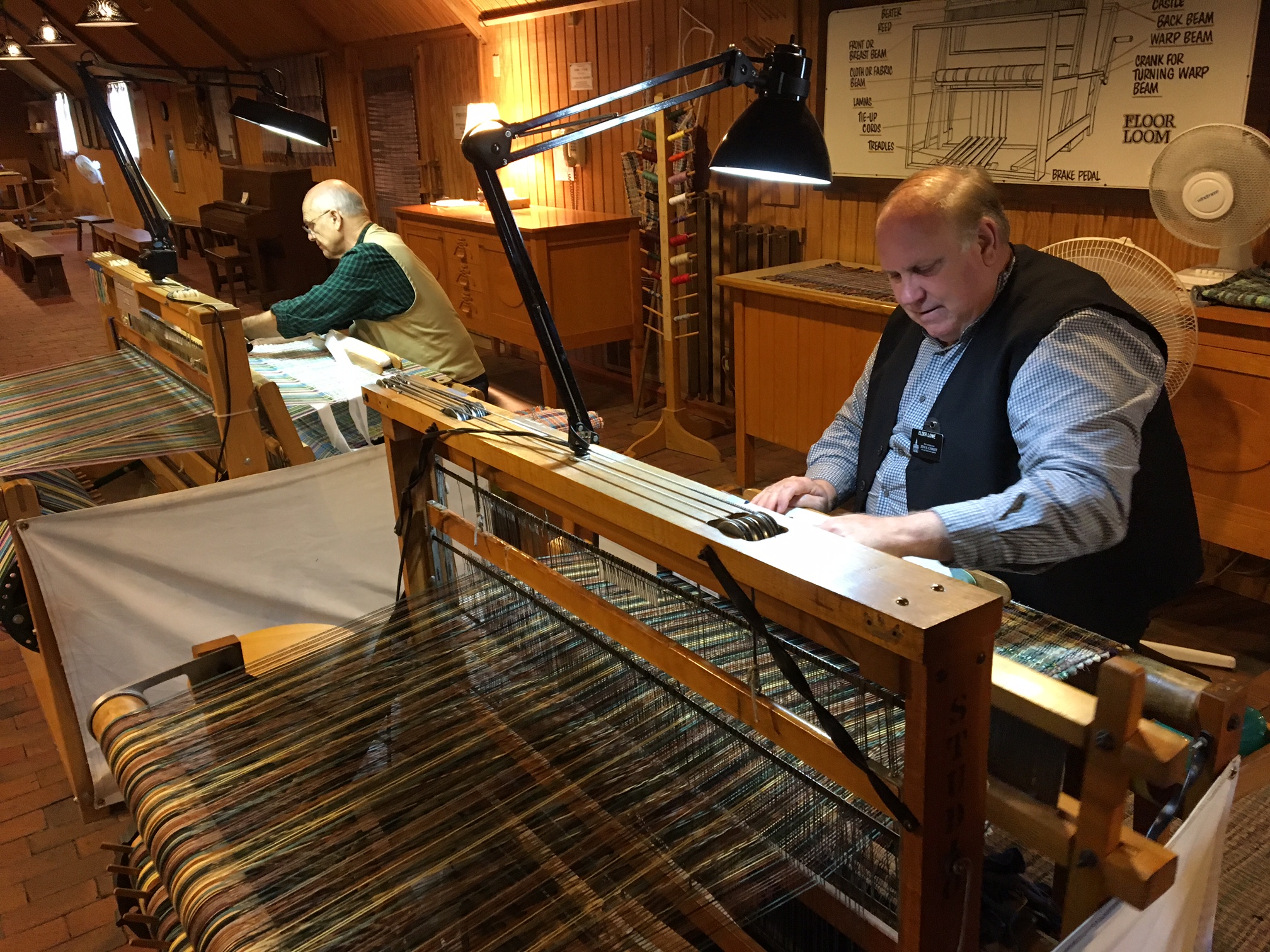 Nauvoo served as the Saints’ gathering place from 1839 to 1846. After persecution in Missouri and Kirtland, the Latter-day Saints found refuge and safety in Nauvoo. They thrived here, turning a swampland on the banks of the Mississippi into the largest, most vibrant community in the state of Illinois. It was in Nauvoo that the Saints built a temple, received saving ordinances for the living and dead, and founded the Relief Society.

It was also from Nauvoo that Joseph Smith was imprisoned and martyred in nearby Carthage, ending the Saints’ peaceful respite and driving them westward one last time. With this history, it makes sense that Historic Nauvoo is the most extensive of the LDS Church’s historical sites. 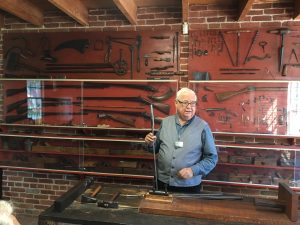 The Browning Home and Gunsmith Shop is a popular stop in Historic Nauvoo. (Photo by Christa Woodall)

Day-to-day 1840s life comes into the forefront in Historic Nauvoo, a living history village with missionaries staffing more than two dozen restored homes, businesses and religious centers encompassing the district. Give yourself at least two or three full days to get the most from all that Nauvoo offers.

Head straight to the Visitors’ Center to pick up a map of Historic Nauvoo and learn the day’s schedule for carriage rides, handcart treks, entertainment shows and more. Summertime features additional shows and activities, including the famed Nauvoo Pageant. All shows, activities and takeaways are free.

A handful of sites have hands-on activities and souvenirs that make them crowd favorites. Taste history with a homemade gingerbread cookie from Scovil Bakery. Watch old-time blacksmithing and wagon making in action at the Webb Brothers’ Blacksmith Shop — and put a ring on it with your own prairie diamond ring. Visit the brickyard to see how Nauvoo got its trademark red brick, and pick up a commemorative brick to take home. Engage in basic life skills like candlemaking, bread baking, rope-making, weaving and more at the Family Living Center.

For visitors with pioneer ancestors, the Lands and Records Office is a must. Missionaries at the center can mine databases for information about Nauvoo’s residents, including maps of homes and properties, family histories, church service records and more. If you’re not sure whether you have Nauvoo connections, stop by the FamilySearch Center to dive into your family’s story. 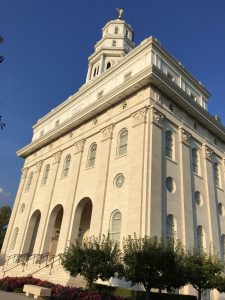 At its dedication in 2002, President Gordon B. Hinckley said the Nauvoo Temple paired with the Salt Lake Temple as bookends in tribute to the Saints’ westward exodus. (Photo by Christa Woodall)

Be sure to make time for the Trail of Hope, a path along Parley Street lined with plaques telling the stories of the Saints who fled their homes and lives in Nauvoo for safety out west. The trail ends at the Pioneer Memorial and Exodus to Greatness, where a monument overlooking the Mississippi River lists the names of pioneers who perished during the trek to the Salt Lake Valley.

Just south of Historic Nauvoo are five historic sites owned and operated by the Community of Christ. For a small fee, visitors can take a 90-minute historical tour in or around Joseph Smith’s homes. The tour includes the Smith Family Cemetery, where Joseph Smith is buried alongside his wife, Emma; his brother, Hyrum; his mother, Lucy Mack Smith; and others.

Shining above Historic Nauvoo is the reconstructed Nauvoo Temple, which was dedicated in 2002. Although the temple is open only to recommend-holding Latter-day Saints, the Nauvoo Temple Arrival Center offers a place for family and friends to wait for those visiting the temple.

A 25-minute drive from Nauvoo is Carthage Jail, the historic jail where Joseph and Hyrum Smith were martyred at the hands of an angry mob. The serene, sacred spirit of this place stands in contrast to the violence its walls witnessed. A missionary-led tour leads through the jail, including a powerful audio presentation detailing the events of that bloody June afternoon.

Winter Quarters: A Time of Transition 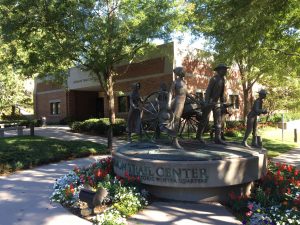 The Mormon Trail Center in Omaha documents the Mormon Migration from Nauvoo to Winter Quarters to the Salt Lake Valley. (Photo by Christa Woodall)

Straddling the banks of the Missouri River near Omaha, Nebraska, are two communities where about 12,000 Latter-day Saints wintered after their exodus from Nauvoo. Their history nods to the LDS Church’s transition from the restoration era under Joseph Smith’s leadership to the pioneer days with Brigham Young at the helm. Winter Quarters became the launching pad for thousands of pioneer companies, with many Saints called to stay behind and prepare others for their journey across the plains.

Meetinghouses are central to Latter-day Saint life, and this transition period was no exception. While gathered for the winter in Kanesville (now Council Bluffs), 200 men built this large log structure to seat 1,000 Saints in two and a half weeks. Although the original was dismantled, a replica bears tribute to the historic meeting here wherein Brigham Young was sustained as president of the LDS Church on December 27, 1847. A small visitor center here also details the journey of the Mormon Battalion, who departed from the area in July 1846.

Although not an LDS historical site, this art deco monument in Council Bluffs offers breathtaking views of the Missouri River. Pause here and ponder how the Saints would have felt, gazing across the plains without knowing what lay ahead on their journey. 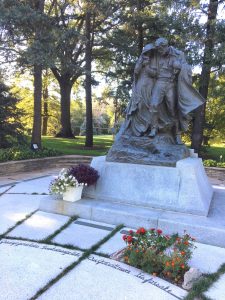 The Mormon Pioneer Cemetery in Omaha, Neb., features an Avard Fairbanks sculpture of parents mourning the loss of their infant child due to the harsh conditions of Winter Quarters. (Photo by Christa Woodall)

Located across the street from the Winter Quarters Temple, the Mormon Trail Center brings to life the Saints’ transition from their beautiful city of Nauvoo to encampments in the Middle Missouri Valley. It also provides a hands-on glimpse of the Mormon Migration, with exhibits detailing how thousands of pioneers journeyed by covered wagon, handcart, railroad and steamship on their journey to Zion.

The Mormon Pioneer Cemetery sits beside the temple, marked most clearly with a monument to the 359 Saints buried there (and in tribute to countless others who died across the Missouri in the Iowa settlements). Only one pioneer headstone remains, but missionaries from the Mormon Trail Center can help visitors find the spot where specific individuals are buried. The monument proclaims the mission of the tribute to the Winter Quarters Saints: “That the struggles, the sacrifices, and the sufferings of the faithful pioneers and the cause they represented shall never be forgotten.”

This is the second installment in a three-part series on Latter-day historical sites scattered across the United States. Look for the final installment on Sunday, July 2, and read the first segment, “Retracing the Restoration: A guide to visiting Restoration sites,” here.

BYU aims to craft a balanced offense in 2017 Previous post