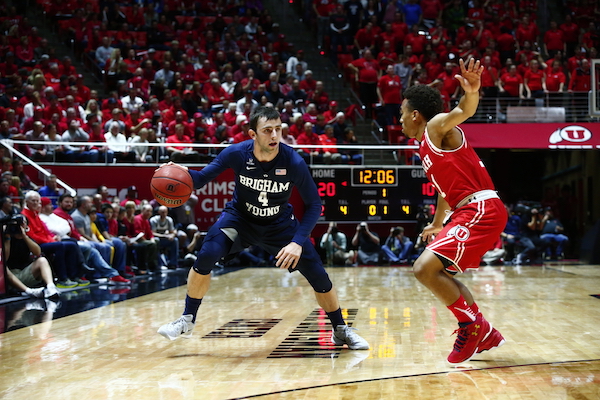 The “cooling off period” for the BYU-Utah programs is over as Utah basketball officially announced a date for its game against BYU following its controversial 1-year hiatus. The Utes will travel to Provo on Dec. 16 to play the Cougars on their home court in the Marriott Center.

“We are looking forward to our non-conference schedule heading into the upcoming season,” said Utah coach Larry Krystkowiak said in a press release. “It will be a challenging schedule for our team and it should be very motivating for our program as we continue to work and get better over the next four months.”

Krystkowiak had a breach of contract when he cancelled the game between the rivals for the 2016–17 season following a heated game. After defeating the Cougars 83–75 at the Huntsman Center in Dec. 2015, Krystkowiak expressed concern for his team’s safety after then-BYU freshman Nick Emery punched Ute guard Brandon Taylor in the stomach. His concerns inspired a hashtag phenomena for #safetyfirst.

“The events that have occurred in our recent games with BYU led me to ask (athletic director) Dr. Hill several weeks ago if we could take a cooling off period and put the rivalry on hold,” Utah coach Larry Krystkowiak said in a statement at the time. “The level of emotions has escalated to the point where there is the potential for serious injury. Chris said he would support me in canceling next year’s scheduled game against BYU. I called and let Coach Rose know our intentions a few days after our game (on Dec. 2).”

“We are looking forward to our non-conference schedule heading into the upcoming season. It will be a challenging schedule for our team and it should be very motivating for our program as we continue to work and get better over the next four months.” — Larry Krystkowiak, Utah basketball coach

Following the cancellation, a frustrated Rose wasn’t sure how the two programs would proceed in scheduling games.

“(Krystkowiak) knows what’s best for his program,” Rose said in a press conference following the announcement. “I totally respect that it’s his program. I don’t respect the decision. I think that you’re raised — at least I have been raised — that your word is your bond. We made an agreement … I think that if the game was scheduled to be played in the Huntsman Center next year the series would still be alive.”

Later, Rose added, “It’s scary because how do you put another contract together?”

However, the state rivals worked through their issues and will officially resume play in the 2017–18 season.

The 2016–17 season was the first year the BYU-Utah basketball teams hadn’t played since 1944, which only didn’t happen because of World War II. The series has been running since 1909, ranking the seventh longest college basketball rivalry according to the NCAA record book. BYU leads the all-time series with 129–128.

Best Company to Work For: 97th Floor employees raise their game thanks to time, teamwork and trust Next post