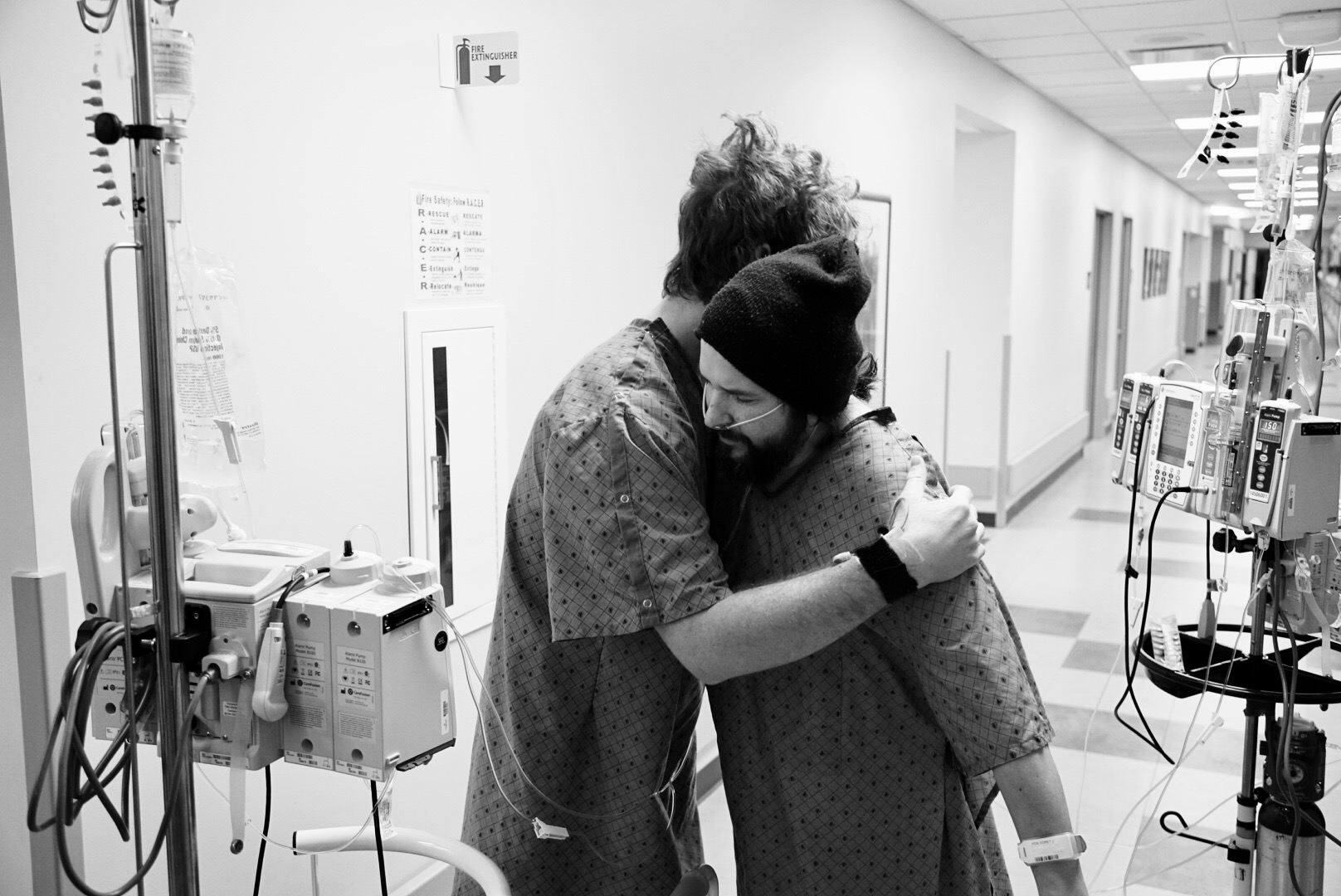 Brandon Robbins and Corey Fox embrace after Robbins donated his kidney to Fox on December 20, 2016. (Photo by Matt Eastin)

When Fox learned he needed a kidney transplant because his chronic kidney failure had worsened, the Provo music community responded with hundreds volunteering to be screened as potential kidney donors. Even those who weren’t able to donate a kidney, still gave all they could. But it was the friendship with Robbins that ended up saving Fox’s life.

Fox had a friend who was ready to donate, but the operating surgeon removed this friend as the selected donor at the last minute. Meanwhile, Robbins quietly completed the screening tests while on the road traveling with his band and made the decision to be Fox’s donor. Miraculously, Robbins was a perfect match for Fox.

Robbins donated his kidney to Fox on Dec. 20, 2016 at the Intermountain Medical Center in Murray, Utah, after Robbins and his wife made the decision that he should be the donor.

“Not only did we receive huge financial help from past Velour alumni like Imagine Dragons and Neon Trees, but I also received the ultimate gift … a life saving kidney from my now literal blood brother Brandon Robbins, of The Moth & The Flame,” Fox said in a press release.

The news of the transplant spread throughout the music community, but the donor was kept secret until both Robbins and Fox made it out of surgery successfully.

Courtney Kendrick, co-founder of the Rooftop Concert Series, took to Facebook after learning of Fox and Robbins’ successful surgeries. She spoke on behalf of the music community on how much Robbins’ donation meant to them.

“I wish I could convey what this has meant to our Provo Music Community,” Kendrick said. “It’s incredibly tender and sweet. I think we all felt something bigger than ourselves yesterday when we learned the news. I’ve always been a huge Brandon Robbins fan, more now than ever.”

After six months of isolation to avoid infection and organ rejection, the two celebrated Fox’s release from isolation with their friends and family at a private party at the Velour on Saturday. Both Robbins and his bandmate Mark Garbett performed as well as other local bands to celebrate the life-saving experience.

While Fox considers 2016 a tough year, he credits the music scene and community for helping push him through it. The endless support paid homage to the venue owner who has helped nurture the local musical talent. Six local bands have signed to major labels since the opening of Velour. Fox is a mentor in the music scene, which makes it no surprise that the community was willing to jump up and help when Fox needed it.

Migrating with the Mormons: A guide to visiting Kirtland, Nauvoo, and Winter Quarters Previous post