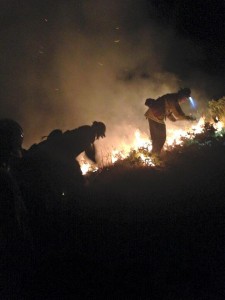 Utah had an above average snowfall in the winter, followed by a wet spring. The mountains are green. So fire danger should be low, right? Wrong, and the fire season is shaping up to be a bad one — and we haven’t even hit fireworks season or the hottest time of the year yet.

The wet winter and spring not only replenished reservoirs, they provided water to grasses, which grew up fast and tall. “They’re the first things to dry out,” said Utah County Wildland Fire Capt. Andrew Watson. And they’re a major carrier of fires.

In the last few weeks, since temperatures have been climbing, fires have been popping up all over Utah County. There have been fires on the west side of Utah Lake, near Eagle Mountain and Saratoga Springs, and there’s still a fire burning in American Fork Canyon.

But the light, flashy fuels aren’t the only reason for the blazes. Many of the fires are human-caused — the American Fork fire, which started from an unattended campfire, and a June 26 fire in Saratoga Springs, which was started by fireworks. Police referred two teenage boys to juvenile court on charges of lighting fireworks outside of allowed days, an infraction, and lighting fireworks in a restricted area, a class B misdemeanor. They also may be responsible for covering the cost of fighting the 4.4-acre fire, which was $12,000-$14,000.

“People have been doing things that have just been pretty foolish,” Watson said. So when you’re out recreating:

“Just have fun and be safe,” Watson added.

Because of the high fire danger, the state forester issued a ban on June 22 on “setting, building, maintaining attending or using open fires of any kind” on all unincorporated areas and all state lands in Utah, Davis, Morgan, Salt Lake and Tooele counties. But the state still allows fires in designated fire pits in improved campgrounds, picnic sites and homes with running water.

In Provo, the city has banned fires in the foothills on the east bench and in the Provo watershed, including South Fork. But the city still allows fires in designated fire pits in improved campgrounds and parks. Anyone who violates the ban could be guilty of a class B misdemeanor.

“We realize that part of the allure of summer is sitting around a fire enjoying time with friends and family,” Provo Fire Marshal Kevin Paxton said in a press release. “We believe with the current fuel and predictable drying conditions that these fire restrictions allow a balance between responsible use of our outdoor resources and the reduction of the risk of a catastrophic fire.”

“We believe with the current fuel and predictable drying conditions that these fire restrictions allow a balance between responsible use of our outdoor resources and the reduction of the risk of a catastrophic fire.” — Provo Fire Marshal Kevin Paxton

In addition to open fires, the state and cities are gearing up for fireworks season, which is July 1–7 and July 21–27. The state forester’s ban includes fireworks, and many cities have fireworks restrictions.

No fireworks in city parks, within 100 feet of any stream bed, and only in areas designed on the city’s map.

No smoking outside an enclosed vehicle or building, except in areas where there is clear ground for three feet. Open fires only in improved locations at homes.

No fireworks in city boundaries.

No fireworks in Traverse Mountain, north of Timpanogos Highway and along the Dry Creek corridor from 1200 East to Center Street.

No fireworks or open fires on all land west of I-15 within the Lindon City limits, including the Lindon Marina. This also includes all undeveloped land within the city as well as all city parks.

On the east side of town restrictions include all areas within an approximate distance of 500 feet from the foothills and U.S. Forest Service or BLM lands. This includes the Dry Canyon Trailhead and the 1200 East Horse Transfer Station. The city posted warning signs near the border of restricted areas. 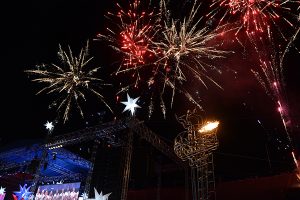 Fireworks blast over the crowd at the 2016 Stadium of Fire. (Photo by Rebecca Lane/UV360)

No open fires in the foothills on the east bench or in the city’s watershed areas, except in improved parks and campgrounds. Fireworks restrictions are found here. The city allows fireworks at these parks:

No fireworks east of I-15, west of I-15 south of the Red Barn or in the Summit Ridge development. Find a map here.

You may not discharge fireworks if you live within 150 feet of an undeveloped lot or property in a residential neighborhood or area.

No fireworks along the northeast boundary of the city, starting at Main Street at 1400 North up through Millpond Drive, east on 400 North and winding its way over to 1300 East and up Canyon Road, including both sides of Canyon Road from 2450 East to the city limits. Find a map here.

Coming and going: Movies and shows on Netflix in July 2017 Next post