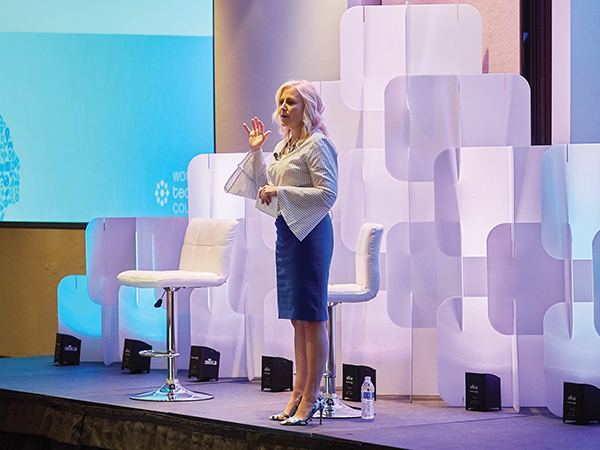 To be frank, the stats regarding women in the Utah workplace are less than fun. At the Women Tech Council’s Talent Innovation Summit, Cydni Tetro, co-founder and executive director of WTC, outlined the tough trends.

Women are also underrepresented at manager, executive and senior-executive level positions. At the moment, they lag more than 5 percent behind men in STEM-related jobs.

“Change is happening, in some areas more than others. But we’re moving things in the right direction, and you can see evidence of that from these companies.” — Cydni Tetro, co-founder of WTC

“Change is happening, in some areas more than others,” Tetro says. “But we’re moving things in the right direction, and you can see evidence of that from these companies.”

Below are WTC’s Best Companies For Women in Tech — plus we weigh in on what we love most about them. Because while there is still work to be done and ground to be gained, companies like these are not only talking the talk — they’re elevating the conversation.

What They Won: Career Development Award

What We Love: The real question is what don’t we love. Because Adobe is off-the-charts impressive. They employ equal pay, they host networking programs for women (including Lunch and Learn sessions), they have youth programs, internship offerings, and they host Women in Tech events. They have work-life balance with flexible schedules. They offer six months of paid maternity leave. (Six months!) And perhaps most impressive, they require that women are in the pipeline for every single position at the company. Every. Single. Position.

What They Won: Innovative Recruiting Award

What We Love: Domo is “freakishly disciplined in hiring the best person for the job.” And with that focus, diversity happens in the best possible way (purposefully and organically). At Domo, women are at every level — including a high number of executive positions. Their benefits program is in the top 1 percent nationally. They have tremendous community involvement and networking opportunities. And with three months of paid maternity leave, a baby bucks bonus, competitive flextime, and an official Return to Work program that helps women transition back into the workplace, Domo is supporting women at all stages of life.

What They Won: Emerging Leadership Award

What We Love: They are one of our top three Best Companies to Work For for a reason. At Chatbooks, more than 70 percent of their team members are women, and they have pay parity at all levels. They have women in executive positions. They have 55 women on their #momforce, 75 percent of whom do most of their work outside of “normal” office hours. What’s more, 50 percent of them say they wouldn’t be in the workforce without this flexible opportunity. And did we mention that Chatbooks offers three months of paid maternity leave — to full-time AND part-time employees? Because they totally do.

What They Won: Leadership Award

What We Love: Vivint is vibrant with women. A high number of women hold executive-level positions. They are launching a program — “Girls Go Digital” — which is a weeklong summer camp to introduce girls to basic programming and STEM careers. And from unlimited time off to maternity leave to flexible schedules, 100 percent of their female workforce say they are happy with the healthy and balanced lifestyle Vivint offers them. Plus, their stats are a thing of beauty: At Vivint, women are 60 percent more likely to be in leadership programs than men. They are 62 percent more likely to be promoted. And 88 percent of Vivint women are satisfied with their opportunities for advancement.