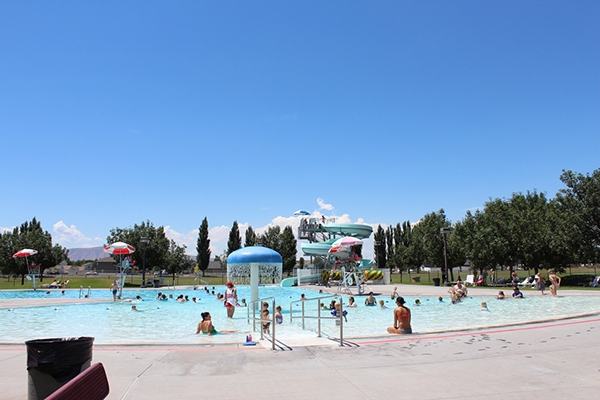 Spanish Fork Water Park closed June 28 because someone pooped in the pool. (Photo from utahvalley.com)

On June 28, someone pooped in the water at the Spanish Fork Water Park. And it wasn’t just any poop — it was diarrhea. As soon as pool operators noticed, they closed the pool and started the process of cleaning the water, to make it safe again.

Swimming in a poopy pool is not only gross, it’s dangerous. That’s because, whether solid or not, poop can cause an outbreak of cryptosporidiosis (in the case of diarrhea) or giardiasis (in the case of solid feces). So the state and county health departments have protocol that pool operators must follow as soon as they see any poop, aka an accidental fecal release.

“Hopefully they’re all following those protocols,” said Jason Garrett, who oversees the Bureau of Water Quality for the Utah County Department of Health.

After all the filtering and increased chlorinating, the pool reopened on June 29.

“All large municipal pools have secondary treatment now. Basically that means we start clean every morning. Any crypto doesn’t have a chance to build up in a pool.” — Jason Garrett, Bureau of Water Quality for the Utah County Department

Garrett said operators of a pool with a secondary filtering system, like UV light, would need to run all the water through the filter at least three times to destroy any potential for a crypto outbreak. For a pool like in Spanish Fork, the water turns over every six to eight hours. If a pool doesn’t have a secondary filter, then it needs to raise chlorine levels to 20 parts per million for 13 hours.

According to the Centers for Disease Control and Prevention, crypto is caused by a microscopic parasite that is very resistant to chlorine-based disinfectants. When someone has crypto, they can release millions of the germs in a bowel movement. And the parasite can continue shedding for weeks after symptoms are gone. People get sick after swallowing infected water; the most common symptom is watery diarrhea.

The process to kill giardia is much faster. When a swimmer leaves a solid feces in the water, pool operators first get the poop and people out. Then, depending on the concentration of chlorine, operators close the pool until the chlorine sanitizes the water. For example, if the chlorine levels were one part per million, then it would take about 45 minutes; if the levels were five parts per million, then seven or eight minutes.

Crypto and giardiasis are the worst-case scenarios when someone poops in a pool, Garrett said. The health department is now investigating one suspected case of crypto associated with a pool, though it hasn’t confirmed it. But a single case here or there is nothing compared to the outbreak in the summer of 2007. That’s when pools around the county were closed because of a major crypto outbreak and young children were banned from swimming in public pools.

“All large municipal pools have secondary treatment now,” he said. “Basically that means we start clean every morning. Any crypto doesn’t have a chance to build up in a pool.”

“The No. 1 thing, people need to be willing to stay home when they’re sick,” Garrett said. So if you’ve had diarrhea, stay out of pools for at least two weeks.

Other ways to prevent a crypto outbreak include: