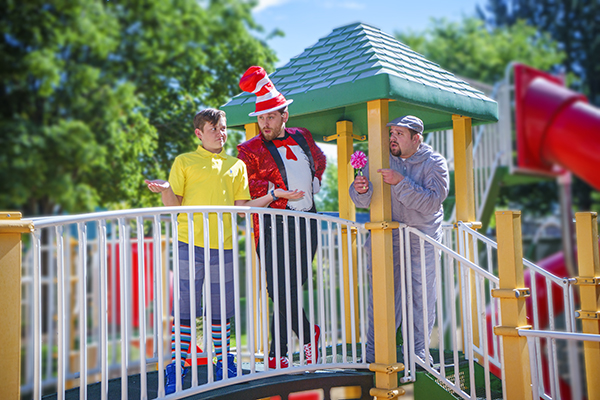 Seth Sherman is JoJo, Eric James Smith is The Cat in the Hat and Kyle Baugh is Horton the Elephant in the SCERA Shell Outdoor Theatre’s production of “Seussical The Musical.” (Photo by Rachael Gibson)

Every Who down in Orem liked musicals a lot. And after nearly two months of practicing, all the Who actors, the small and the tall, are ready to share “Seussical The Musical” with a crowd.

Director Shawn Mortensen is the one chauffeuring the cast into the whimsical world of Dr. Seuss — a task more difficult than protecting Whoville from destruction.

“Dr. Seuss is something that everybody knows, so you can’t get too conceptualized in how it looks or give it an angle,” Mortensen said. “These characters look and act like you expect them to be.”

In order to capture the beloved children author’s characters, Mortensen advised his cast to reflect on how they always imagined these characters would be in real life. He wanted his cast to remember reading the books as children or, for the older cast members, to think about how they read Dr Seuss’ books to their children.

“I feel like the actors have done a good job in finding the voices for their characters that brings them to life,” Mortensen said. …“I’ve told my cast to look at it as if you are giving a voice to a cartoon character.”

“The power of that imagination in youth and adults can be powerful and should be embraced — not squished.” — Shawn Mortensen, director

Then when it came to the set, Mortensen and set designer Cole McClure put their thinkers on to create Dr. Seuss’ colorful world.

“Right when you walk into the venue you know this is a tale about Dr. Seuss even if you don’t know what it’s about,” Mortensen said.

And the show is all about “the thinks you can think.” “Seussical The Musical” follows Horton, an elephant played by Kyle Baugh, as he tries to save the town of Whoville. Along his journey to protect the village, Horton encounters multiple characters from Dr. Seuss’ books including JoJo (played by Seth Sherman), Gertrude McFuzz (Emily Bennet), Mayzie (Abbey Wood) and more. The Cat in the Hat, performed by Eric James Smith, narrates the tale.

If audience members find the array of stories confusing, Mortensen recommends being extra attentive when the main storyline — which is Horton the elephant — appears on stage.

“The other things are fun,” Mortensen said. “Any time Horton comes on stage, pay attention.” 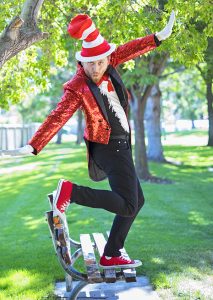 While Eric James Smith is playing the Cat in the Hat in this show, Director Shawn Mortensen has played the Cat in the Hat on two different occasions and claims him as his favorite Dr. Seuss character. “He embodies that role to imagine and do fun things and then clean up after yourself,” Mortensen said. (Photo by Rachael Gibson)

“Seussical The Musical” is a nostalgic affair, Mortensen says. “These are stories you’ve heard your whole life.” And not only is it a walk down memory lane, but its a walk people can take with their families. In fact, being part of the show is a family activity for some of his cast members Whoville’s Mayor and Mrs. Mayor (Dan and Amy Hixson) along with their kids are all part of the cast. Mortensen’s 7-year-old daughter and his wife are also part of the Whos. And Mortensen hopes that thread continues with the audience.

“When kids come to the show with families, parents can relate because these are the same stories they heard when they were kids and now they are reading them to their kids,” Mortensen said.

And as parents and children come together, Mortensen hopes everyone can escape to this world where imagination reigns.

“The power of that imagination in youth and adults can be powerful and should be embraced — not squished,” Mortensen said.

“Seussical The Musical” opens Friday, July 7 and runs through July 22. The show is performed on Mondays, Tuesdays, Thursdays, Fridays and Saturdays at 8 p.m. at the SCERA Shell Outdoor Theatre, located at 699 South State.

All for love and love for all: Provo’s Stephenie Larsen encircles LGBTQ youth Next post